"The 'Aha!' moment was that I wanted to do a show that satirized the Silicon Valley culture," says Sammy Wegent. "Having been saturated in it for a long time, having done corporate training and comedy and working, on top of that, the past three years at mobile gaming company Zynga. I'd also seen lots of bad Powerpoints and over-the-top faux TED talks that were almost comedy in themselves."

The show that emerged out of Wegent's musings about a year and a half ago is Speechless, which features performers on stage giving a Powerpoint presentation in front of a live audience. It's been described as part karaoke and part lecture.

Just wait. There are a few twists.

Twist One: The topic for each eight minute talk is determined by a spinning wheel and can include anything from a quarterly report or app launch to a wedding speech or even first contact with an alien species.

Twist Two: On any given night, the performer pool can be made up of software engineers, executives, stand-up comedians, and sketch performers. And one is also a volunteer from the audience whose only preparation are the skills they brought with them, maybe bolstered by a little liquid courage.

Twist Three: The performers have never seen the slides in the presentation -- and the images on the slides have nothing to do with the randomly chosen topic.

Wegent, 35, had been doing and teaching standup and improv comedy since moving out from Florida about 10 years ago. He'd also put together the first season of a web series, Everybody's A Comedian, with himself as the star. But to get this show off the ground he was going to need some help.

He turned to a fellow performer, Anthony Veneziale, whom he knew also had some producer chops. "I started in New York and was in a show called In The Heights, which went to Broadway and won a Tony for Best Musical in 2008." He helped to produce and re-launch PBS' The Electric Company, where he also appears. As soon as Wegent laid out the premise for Speechless, Veneziale smelled a winner and had another producer, Scott Lifton, weigh in.

Lifton has been producing the San Francisco version of Mortified, a show that has been running in various cities around the U.S. for over a decade. "That's, essentially, a show where people share their actual, empathetic, and potentially embarrassing teen diaries, bad poems, bad love songs -- anything created before the age of 19."

Combining forces and refining Wegent's basic idea - improvising Powerpoint presentations - the two producers helped to shape a format that uses judges and a scoring system to pit presenters against each other, further heightening the idea of a competitive professional arena. The show remains, however, drenched in a heavy downpour of sarcasm and silliness.

The Speechless organizers put several "beta versions" of the show up in front of audiences to further fine-tune the proceedings and found themselves with sell-out crowds from the get-go. "I remember we were doing our second show and there were lines out the door," recalls Veneziale, "and I thought, 'Okay, I guess this is going to be very popular!'"

Halfway into the first year, Speechless was invited into the annual San Francisco Improv Festival (where they will be returning in September), and four months after that came the request to be part of the city's 13th Annual San Francisco SketchFest. And the sellout crowd at their monthly haunt, a club called Public Works in the Mission District of the city, continued.

But the public show has been Phase One of Wegent and company's master plan. Recently they've been moving briskly into Phase Two: Corporate Speechless.

"We've been fleshing Speechless out for over a year now - but even before I knew if it would even work, it struck me that this format could actually help people to be a better presenter," says Wegent.

Producer Lifton was struck by similar thinking. In addition to Mortified, he makes his living as a team builder and trainer. "Most of the things I normally do, team building-wise, is getting people out of the office that never leave the office and just learn how to have fun. Speechless gives them the chance to loosen up, but they also get the freedom of poking some fun at their workplace. At the same time, they're learning a whole new dimension of public speaking and how to think on their feet."

One of the presenters during the first year of Speechless, Chet Haase, is a former improv student of Wegent's but also is a Google software engineer. He not only programmed the digital spinning wheel used during the show but introduced the Speechless crew to the powers that be behind the Google I/O developer conference this year, who invited them to do their thing. 1500 programmers and other assorted computer geeks watched as a panel of nerd luminaries tried improvising through the varied and assorted slides. Everyone stayed glued to their seats, and the attendees rated it as the second-most popular attraction at this year's conference. 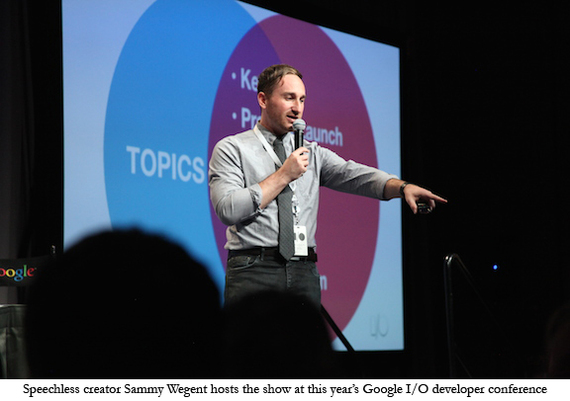 Since then, Wegent and the other guys have taken the corporate version of the show on the road. Up to Washington to the Melinda and Bill Gates Foundation. Down South to Arkansas at the Wal-Mart world headquarters. And the requests have started to pile up. "We recently had a training session for eight more teachers," reported Wegent. "We need enough people to handle the demand."

And if the corporate clamor for action wasn't enough, the performance side is getting into the action. This month, on Monday, August 25th, Speechless makes its debut in New York City. Veneziale is getting ready to take the wraps off of the show at Joe's Pub at The Public; at the same time he's working hard on performing and producing a series, Freestyle Love Supreme, for the nascent Pivot TV network.

Clearly, Speechless is striking a chord in audiences, but why? Wegent thinks it has to do with the fact that doing presentations has become an increasingly common part of the professional "habitat" for people. He even foresees a time when the show might have an educational offering, seeing that many schools require that their students prepare reports in the Powerpoint format.

"I think this show started as an interesting study of technology and our relationship to that technology," says producer Lifton. "As its evolved, however, it seems its becoming more a celebration of the human contact part of technology."