Beach goers on Sanibel Island, Florida have been shocked to find five dead loggerhead turtles stranded on the shore within five weeks. On Good Friday the latest victim of a boat collision washed ashore with extensive prop and skeg wounds in its carapace (shell). Sea turtles are sometimes called "living dinosaurs," and have been around for over 90 million years, but are now considered endangered. They are marine reptiles with a low reproductive rate and high vulnerability to predation. Like many animals on the planet, sea turtles are also falling victim to human activity on the world's oceans. 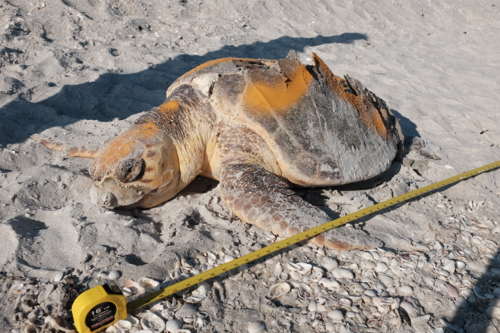 The Good Friday Loggerhead. Notice no decomposition around eyes. This appears to be a "fresh" kill (Photo: Nienaber) 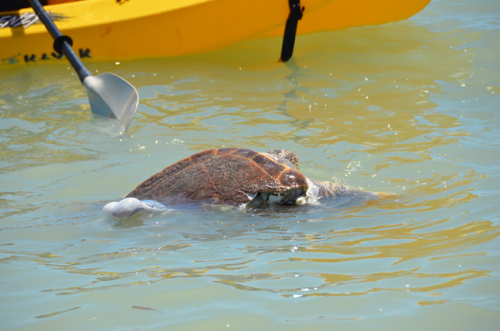 Sanibel's beaches are a prime nesting ground for the loggerhead (Caretta, caretta), and in the months from March to May their vulnerability to speedboats increases. The turtles gather in shallow waters during the breeding season and lumber ashore from May to August to lay nests of a hundred or more eggs that hatch by October. Sanibel has done a good job regulating beach lighting during this time, but no one seems to have addressed the issue of speeding boats.

"Throughout the state's waters, collisions with boats are the most common identifiable cause of trauma in sea turtles that wash up dead on Florida beaches," according to the website of the Florida Fish and Wildlife Commission (FWC). 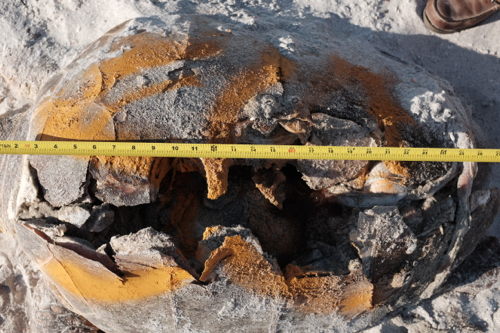 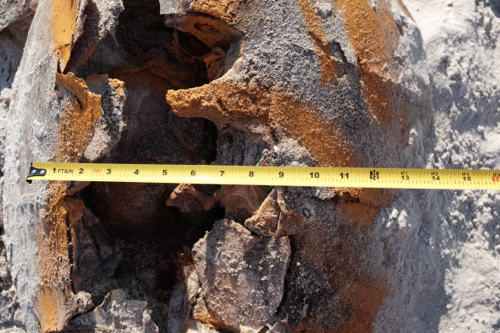 In an extensive database FWC documents sea turtle deaths, injuries and illnesses from 1980 to 2013. The data are organized by year, county, species and month. The data source is the shared FWC, Fish and Wildlife Research Institute, and Sea Turtle Stranding and Salvage Network Data Base.

Taking a look at Lee County, where Sanibel Island is located, provides some fodder for consideration.

From 2010 to 2013 deaths increased in Lee County from 64 to 97 individuals a year for all species of sea turtles, and 24 to 36 for the loggerhead. 2013, the last year for which data is available, saw a stunning 21 casualties from March through May. This is prime breeding season. Every nest, every egg, is critical to the survival of the species.

Boat registrations have also gone up exponentially in Florida. 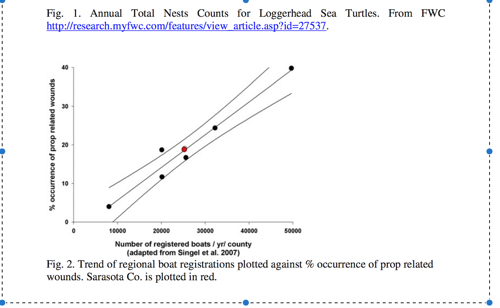 In a wide ranging conversation Allen Foley, Wildlife Biologist at FWC, said it is "a safe bet" in the case of turtles found dead onshore with prop damage, that a boat collision is the cause of death. They are hit when still alive. "There is no other smoking gun," such as toxin screens which would negatively influence mobility or behavior.

FWC is in the process of publishing a paper which confirms the causality between boat collisions and turtle deaths.

Other studies also support more than a coincidence and indicate a direct correlation with speedboat activity immediately offshore and turtle deaths.

In a 2008 paper examining diving behavior of the turtles in nesting areas, researchers discovered that boat strike injuries TRIPLED in Florida from 1980-2008. Trend data was obtained from the Florida Sea Turtle Stranding Network.

Using four years of satellite telemetry data, the study determined that turtles are "most vulnerable to boat strikes between 8 AM and 12 noon" on the day before and following nesting activity. The study did not look at breeding activity, but Good Friday's damaged turtle certainly fits the time criteria for vulnerability. On that day there was increased boat and tourist activity just outside the buoys marking shallow water.

Florida's waters are not alone in experiencing this environmental catastrophe.

The Galapagos Marine Reserve is a supporting case. Tourism in Galapagos has increased to more than 180,000 visitors a year, according to a 2011 study, and "the boat traffic within the Marine Reserve poses a significant risk to sea turtles."

Boat strikes were most frequent at foraging sites close to Puerto Baquerizo Moreno, a commercial and tourism port, where incidence varied between 16 and 20 percent. However, at the nesting beaches most of the impacts (59 percent) had occurred during the same nesting season while only 5 percent of the sea turtles observed at the foraging sites suffered their injuries during the study period. No data on survival rates from boat strike exist, however it is clear that many turtles die from the trauma caused by the impact. This report focuses on only the survivors; therefore the results represent a minimum estimate.

Sometimes the obvious needs science to confirm what the eyes see and what intuition suggests.

The most recent research on collisions used actual dead turtles and fake shell models, adding to the mounting evidence about boat culpability.

The conclusions were what one would expect.

Results indicated that vessel speed "significantly influences the likelihood of catastrophic damage, whereas depth in the water column does not." Jet propulsion did not impact any of the test models.

And so we return to our unfortunate Good Friday loggerhead.

What can be done? Sanibel Island is known as a wildlife sanctuary and this sanctuary should extend offshore to marine life. No wake zones protect manatees. Why have wake and/or reduced speed zones not been extended to the sea turtle? 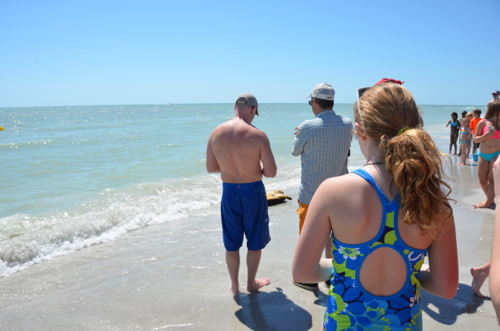 If it were not for the large numbers of beach goers on Good Friday, the longshore current may have carried our unfortunate loggerhead away, with the cause of injuries lost to time and tides. The horror and sadness of the beach goers as witnesses to this senseless loss of an endangered species was evident.

It is well past time for law enforcement to enact legislation to limit excessive speed and large vessels in sea turtle breeding waters.

Biologist Foley suggests that one solution might be a voluntary initiative which limits boat activity in breeding grounds up to a kilometer offshore. This initiative would also protect kayakers, swimmers and paddle boarders who share these same waters.