A mysterious ancient book written in an Egyptian language called Coptic has puzzled researchers ever since it was first found as part of an extensive papyrus collection at Macquarie University in Australia in 1981.

But now, two Australian scientists say they've finally translated the 1,300-year-old text, and it turns out that the text is a book of spells, Live Science reported.

The mystery remains, however, as to who wrote the book and used the spells.

"Many such Coptic magical texts were copied or used within monastic communities, and the degree of ritual knowledge in the invocations makes clergy or monks logical candidates for their production," Dr. Malcolm Choat, director of the university's Ancient Cultures Research Center and one of the scientists who deciphered the ancient book, told The Huffington Post in an email. "But other ritual practitioners can be imagined, and of course the spells could have been cast on behalf of ordinary people who needed their problems solved." 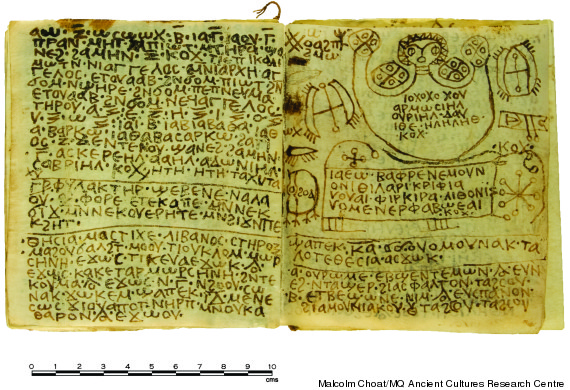 Choat and his colleague Dr. Iain Gardner, a professor of religion at the University of Sydney, found that the text includes ritual instructions and a list of 27 spells intended to cure various ailments or to bring success in love and business.

"There are also spells for 'Someone who is possessed,' 'Someone who is annoyed at you,' 'That a woman might conceive,' 'When someone has a magic on them,'" Choat said in the email.

The language used in the ancient book suggests that it originally came from Upper Egypt, possibly near Hermopolis, an ancient town located near the Nile River.

The ancient text is now housed in the Museum of Ancient Cultures at Macquarie University in Sydney, Australia.