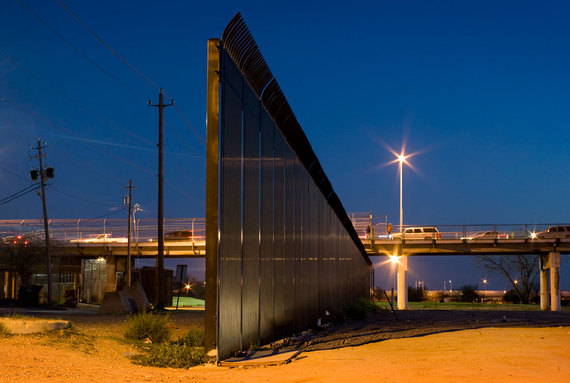 Aside from the thoughtful and humane analysis by Glenn Beck and Hugh Hewitt of the recent border crisis, conservatives have utilized this immigration issue to further the need for a "secure border." Whereas Jeb Bush earlier this year labeled the desperate steps taken by illegal immigrants as "an act of love," many in the Tea Party view the plight of refugee children at our border as an "invasion." It is this sentiment that has fueled much of the latest GOP rhetoric. Ironically, wasting billions on a fence to protect us from people we employ in not only ludicrous, it makes a mockery of economic data.

According to a TeaPartyTribune.org article titled, Secure this border Mr. President, the GOP's stance on illegal immigration can be found within the following words:

...deportation IS exactly the humane thing to do as these ILLEGAL now criminal children belong with their parents NOT as wards of our states paid for with our taxpayer dollars. These children were willingly sent by their parents to perpetrate a criminal act...in their name I might add...against our country for their own gain...and they need to go.

However, with a much needed reality check here, the building of a secure fence along the entire southern border has had its cost estimated at $46 billion to build, so you just know it won't get done anytime soon as that would mean Obama would have to cut his freebie and handout programs to our future Democratic voters along with cut funding to the muslim terrorist groups that he so loves...and you know he will do neither.

First, as Jeb Bush accurately stated, illegal immigrants "broke the law, but it's not a felony. It's an act of love." Crossing the border, contrary to the Tea Party rhetoric, doesn't make you part of the Manson family. Technically, it's a misdemeanor. Also, aside from omitting the names of the terrorist groups that Obama allegedly loves, the Tea Party article refrains from pointing out that hiring illegal immigrants is also a crime. For every "criminal" that crosses the border, there's an American corporation or citizen who breaks the law and engages in a criminal act by hiring this person.

The Washington Post states that after the 1986 reform law (the same law Ronald Reagan provided amnesty to almost 3 million illegal immigrants), "employers found guilty of employing 10 or more workers whom they know to be here illegally could face up to five years in prison." As for hiring individuals, American citizens face a $250-$2,000 fine per illegal employee for first time offenders and fines go up to $5,000 for the second offense. It's odd that the Tea Party and other conservatives would go to great lengths to label people who cross the border as "criminals," but never seem to mention the criminal acts (by citizens) that precipitate the initial crossing. Also, the original figure was $49 billion for the fence and maintenance costs, not $46 billion, but what's three billion among friends?

Furthermore, most foreign invaders into a country aren't asked to pick crops or pay taxes. The Tea Party rhetoric and platform fueling much of the GOP's stance on immigration simply doesn't correlate with economic reality. According to the Pew Research Center, there were 8.4 million unauthorized immigrants employed in the U.S.; representing 5.2 percent of the U.S. labor force, an increase from 3.8 percent in 2000. When examined from the point of view of certain states, another study by the Pew Research Center lists an even higher percentage of unauthorized immigrants as part of their workforce: Nevada (10 percent), California (9.7 percent), Texas (9 percent), and New Jersey (8.6 percent). Also, a report by Texas Comptroller Susan Combs, states "without the undocumented population, Texas' work force would decrease by 6.3 percent" and Texas' gross state product would decrease by 2.1 percent. Someone should notify Ted Cruz that these invaders are important to the Texas economy. In addition, Rick Perry should be informed that 9 percent of the Texas workforce is composed of illegal immigrants.

Also, the billions spent on an additional border fence and security would keep out the same people who are vital to the agricultural sectors of this country. The USDA has stated that "any potential immigration reform could have significant impacts on the U.S. fruit and vegetable industry." The Department of Labor reports that of the 2.5 million farm workers in the U.S., over half (53 percent) are illegal immigrants. Echoing the Department of Labor and the USDA, agricultural labor economist James S. Holt made the following statements to Congress in 2007:

The labor intensive fruit, vegetable and horticultural sectors are already overwhelmingly dependent on foreign workers, the majority of whom are working in the U.S. illegally. The U.S. dairy, meat packing, and food processing sectors are significantly dependent on a foreign, and preponderantly illegal, workforce and becoming more so every year.

The reality, however, is that if we deported a substantial number of undocumented farm workers, there would be a tremendous labor shortage.

The Congressional Budget Office in 2007 stated that "in the aggregate and over the long term, tax revenues of all types generated by immigrants -- both legal and unauthorized -- exceed the cost of the services they use." The CBO findings and other data prove that the notion of illegal immigrants destroying the country is categorically false. Echoing this economic reality, UC Davis economist Giovanni Perri has stated that both legal and illegal immigration, "unambiguously improves employment, productivity, and income" for citizens.

Finally, illegal immigration has been down in recent years. According to Bloomberg, the "Pew reported that for the first time in 40 years, about the same number of Mexican migrants (legal and illegal) returned home as arrived, bringing net migration to zero." Pertaining to the idea that fences and walls will protect us from refugee children or future farm workers, Princeton University professor Douglass Massey in SFGate.com explains a better solution to the issue:

Douglas Massey, a professor of sociology at Princeton University who studies the border and illegal immigration, said the government should spend its money differently.

"It's a waste of money," he said. "If you want to increase security, better to use some of that money for ports and transportation systems. If you want to lower the rate of Mexican immigration to the U.S., I would spend it on development assistance for Mexico."

In addition, much of the Texas border is defined by rivers, and as one observer mentioned, "It is a winding river..."Where in the world are you going to put fencing? To propose that suggests ignorance of the border and the terrain." As for stopping terrorists, a Bloomberg article in 2010 explains that of the "29 acts of terrorism that have taken place on U.S. soil in the past 25 years, none of the perpetrators entered the U.S. from Mexico." Also, a border fence would do nothing to stop people who stay beyond their student visas (technically illegal immigrants) nor would it address the various underground tunnels used to smuggle drugs. The U.S. is the world's largest consumer of illegal drugs, so kicking our drug habit would stop the flow of drugs to
this country.

To put things into perspective, the 2015 VA budget is $163.9 billion. Instead of bemoaning the tens of millions used to help desperate children at the border, why not utilize the billions for a fence and give this money to veterans? Of course, budgets represent value systems and the GOP has pandered to Tea Party xenophobia and nativism in order to appease its voting base. The prospect of spending over $46-$49 billion to protect Americans from people they hire is pure folly; a policy that adheres to nativist rhetoric rather than CBO, Department of Labor, or Pew Research data. While the Tea Party and other conservatives would bemoan money spent on food stamps for hungry Americans, the $46-$49 billion to protect us from people that make up 9 percent of the Texas workforce and over 5 percent of the U.S. labor force is a wasteful expenditure. Ted Cruz is wrong; illegal immigrants don't come for amnesty, they come because Americans utilize their labor.