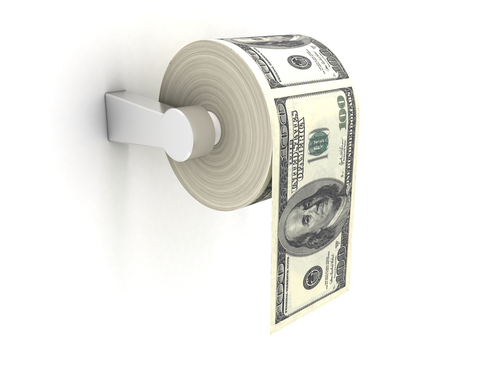 Some call this the season of Giving. It's not too late--have you donated to your favorite arts resource or charity yet? (And there's a tax deduction incentive, too!)

Yet we're now deep into the holiday season of especially conspicuous consumption, when capitalist tendencies rear their ugly head. Giving Tuesday attempted to be a counterpart to Black Friday and Cyber Monday, and the consumption-heavy holidays reflect our culture's unease with the ethical complications that come from a capitalist society--and its inherent inequities. We have Donald Trump, who "ranks among the least charitable billionaires in the world" (Newsexaminer) contrasted with Facebook founder Mark Zuckerberg and his wife, Pricilla Chan, who recently announced they would give 99 percent of their Facebook shares "during our lives"--holdings currently worth more than $45 billion--to charitable purposes.

And we have Martin Shkreli, CEO of Turing Pharmaceuticals. Of recent note:

Martin Shkreli, the hedge fund manager and latest poster boy for Wall Street greed, now says he regrets not increasing the price of a life-saving drug by more than he already did.

Asked by an audience member at a healthcare summit hosted by Forbes on Thursday what he'd do differently if he could go back in time to before his highly criticized decision to raise the price of a 62-year-old drug, he replied: "I probably would have raised prices higher, is probably what I should have done. I could have raised it higher and made more profits for our shareholders. Which is my primary duty."

The price hike, which took a a pill of Daraprim from $13.50 to $750 a piece overnight, drew a strong backlash. Daraprim was initially developed to treat toxoplasmosis, which strikes people with compromised immune systems.

The Turing Pharmaceuticals CEO went on to say, "No one wants to say it, no one's proud of it, but this is a capitalist society, capitalist system and capitalist rules, and my investors expect to me to maximize profits, not to minimize them, or go half, or go 70 percent, but to go to 100 percent of the profit curve that we're all taught in MBA class."

The ethics of capitalism. It's a fitting time to contemplate more deeply what really matters, and to that end, here is a timely essay from Nathan Shedroff, the founder and chair of the Design MBA programs at California College of the Arts.

Every few years (or is it monthly now?) there seems to be another big story about a company doing something so egregious that it spurs the conversation about business ethics. Recently, we've got two: Volkswagen and Turing Pharmaceuticals.

In the former case, the engineers at VW found a clever trick to fool government emissions tests so that, on the rare occasion one of their cars was tested, it would recognize the test (through pattern-matching the conditions) and enable a special mode that would reduce emissions drastically (and, most likely, performance, too). Then, when it looked like the coast was clear, it would switch back to "normal" mode for better performance that violated emissions laws. Was it clever? Absolutely. Was it legal? Not at all. Then, why did VW do it? Did they really think they could get away with it? No matter the answer, it's going to cost them several Billion dollars.

In the second case, Turing Pharmaceuticals bought exclusive rights to an older drug that wasn't sexy or expensive, but very necessary for certain treatments. They then promptly raised the price from $13.50 a tablet to $750--that's a 5555% increase! They're arbitraging the medications market, but what else would you expect from a bunch of investment bankers? And, they're not the only company trying this. Is it clever? Sure. Is it legal? Probably. Is it profitable? Extremely--for now. Is it ethical or moral? Definitely not. Is it douche-y? You've got it.

The response from people is often a raft of calls for business programs across the country to reinforce ethics training into their programs with new courses. It's a decent attempt, but it won't truly solve the problem. This phenomenon occurs over and over because business operating from a set of outdated, ill-conceived, and often unsupported assumptions about itself.

If you think that the aim of business is just to make money, you're mistaken. There's nothing wrong with making money, but your humanity doesn't get left at the door of the office when you walk in at 8am only to be picked-up on the way out as you leave at 5pm.

It's often stated that the Founding Fathers were pro-business, and they were--for small business. They were profoundly suspicious of corporations, however, and entombed legislation to control them (this is why they have to be chartered by the state). This wasn't out of malice or ignorance, but practicality borne from experience. After all, they had just won the first anti-corporate war (we call it the American War for Independence and it wasn't based on independence from England but from the corporations the King chartered that treated the colonists as slaves--and not just those who were black). It's all well described in the excellent book, Gangs of America, and if we're going to fix business, we need to get our history right and start back at the beginning.

Recently, there's been a rash of social ventures and social entrepreneurship with young professionals and older VCs (who have already made their fortunes) alike creating startups with social missions or B-Corp status. But, this isn't actually a new idea--it's merely the Founding Father's plan finally coming full-circle. To the Founding Fathers, a corporation was supposed to have a social mission. It was the only reason why a charter should be granted. They were fine with partnerships and sole-proprietors to be solely profit-minded but if a corporation wasn't serving the community, it shouldn't exist (and couldn't be trusted). They knew that bridges and dams wouldn't get build without the protection that corporations provide so they allowed for corporations because they served a purpose to society.

Along the way, of course, corporations freed-themselves of this limitation and invented the misguided principles that "the business of business is business," and nothing should deter profits. They did this through a corrupt Supreme Court, and they've made it nearly illegal for a company to take into account any concerns other than profits. (This is why, at every annual board meeting of Apple Inc., there's someone grilling Tim Cook about why they spend so much on environmental innovation, clean energy, and employee perks.)

Now, to fix this wide-spread and engrained fallacy, we have to petition the courts to change judgments, invent new corporate forms, and actually teach ethics to otherwise clever, capable people to correct the damage that has been done, and return the industry of business to a respectable force of positive change in society. In the past, there were entrepreneurs who did care about their relationship to their communities and they created incredible value for not only themselves, but for those very communities. However, we now have to wedge fixes all around the ecosystem in order to counter the terrible, global effects of the mindset that businesses don't have social responsibility. Likewise, business schools are due for another round of the never-successful imperative to teach more ethics.

What I've learned in my own MBA programs is that you don't need an ethics course if ethics and social responsibility are woven into the curriculum and culture of all of your courses. They aren't separate. The business of business is creating value, in all it's forms and for all stakeholders, not just a few people who come-up with innovative ways to game the system or hurt others.

Nathan Shedroff is the founder and chair of the innovative Design MBA programs at California College of the Arts. These programs weave sustainability, social justice, design-based innovation, and new business principles into business programs for the 21st Century.