Photographs of a dead sperm whale found in the Gulf of Mexico a few weeks after the BP Deepwater disaster have reignited a debate as to the extent of the oil spill damage and the lasting consequences of the ecological tragedy.

On Wednesday, environmental organization Greenpeace released a series of long-anticipated photographs of a bloated and burned juvenile sperm whale that had been found dead on June 15, 2010 -- seven weeks after the start of the BP Deepwater Horizon oil spill disaster: 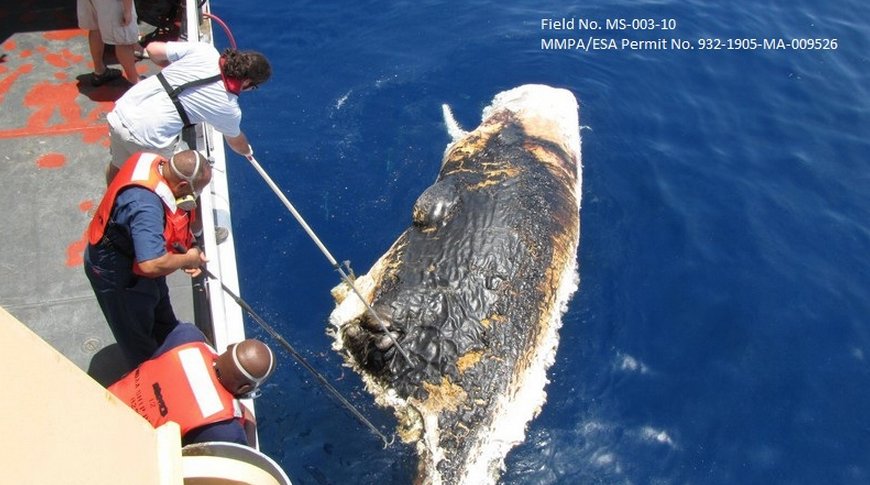 It was the first confirmed sighting of a dead whale since the BP oil spill… a time of huge public interest in the fate of whales, dolphins, sea turtles and other threatened animals -– and yet US government officials suppressed the first reports of the discovery and blocked all images until now.

The pictures had been taken by researchers on the ship Pisces about 77 miles south from the site of the Deepwater Horizon. However, as Greenpeace learned, the people on the boat were told by the National Oceanic and Atmospheric Administration (NOAA) not to make the photos of the whale public.

"I just spoke to the command center in Houma and they have asked that you all not post the photos to anyone as they are part of an official investigation," said a NOAA staffer to the people on the boat, according to a June 2010 email obtained by Mother Jones.

Nonetheless, Mother Jones notes that at least one NOAA photograph of the whale had appeared online at the time and a school teacher that had been aboard the ship posted some of her own photos on her blog.

Still, the photos were not widely circulated -- and that, says Greenpeace, is unsettling.

"The government never published this album of photographs and that's sort of … weird that there were no government photographs released," Kert Davies, the group's research director, told The Huffington Post. "What we're concerned about is … that there had been that clamp down on information around the whale."

NOAA finally sent the pictures to Greenpeace a couple of weeks ago, following a Freedom of Information Act request filed in 2010 that sought evidence of the spill's impact on endangered species.

Photos of the sperm whale (story continues below):

Dead Sperm Whale In The Gulf Of Mexico, June 2010

NOAA never did determine what killed the whale. A June 16 NOAA press release from 2010 noted that it was "impossible to confirm whether exposure to oil was the cause of death," but added that they had collected blubber and skin samples for analysis.

The results of these tests, however, were never released.

"They never published them or made an explanation," Davies recently told Mother Jones. "They took samples, swabs, but we never saw the lab results … What happened to it? How many times does a whale just die?"

NOAA spokesman Ben Sherman told Mother Jones on Wednesday morning that the agency did conduct tests on the whale samples, but "because the animal was so badly decomposed the cause of death could not be determined."

"At this point, we feel like it's very possible that oil was implicated in its death," she said.

Juska added, however, that it's possible to attribute the blackened surface of the whale to sunburn.

The official tally of animals affected by the spill includes two dead sperm whales found in the months after the incident. Sherman said the whale in the photographs had been included in the tally.

While Greenpeace says it hopes the government has been truthful in its survey and revelation of the oil spill's impact, the group notes that the administration's lack of transparency in handling the ecological crisis has been disquieting.

"It makes me very angry, very upset that we're not being told the whole truth," Davies told The Huffington Post. "You can only go so far hiding the truth on things as precious as a sperm whale and there aren't many of them on Earth."

Citing the example of the large amounts oil that had been stirred up from the Gulf during Hurricane Isaac this year, Davies added that the full consequences of the BP Deepwater disaster will be emerging for years to come.

Juska adds that the sperm whale incident has raised concerns about the veracity of the data released by NOAA regarding the animals affected by the spill. There is a concern that the number of animals who died, were sickened or stranded is, in fact, much higher than what we now know.

In a press release sent to The Huffington Post, Davies added:

Before the disaster, this area of the gulf had one of the largest and healthiest populations of sperm whales in the world according to biologists. These photos of a dead young whale remind us that we still don’t know the full ecological story of the BP Deepwater Horizon Disaster.

The problem remains that we don’t know exactly what BP and the government scientists saw, what they documented, and how they kept their records. The systemic clamp down on information and consistent lack of transparency and images such as these continue to remind us to demand full accountability from the oil companies and the government, especially with the looming legal settlement between the company and the government.

This week, BP asked a judge in New Orleans to finalize its $7.8 billion settlement for economic damages arising from the spill.

As the Guardian notes, however, BP still "faces claims from the federal government for environmental damages and accounting for wildlife killed as a direct result of the spill -- from dolphins to turtles to whales -- will be critical to the final bill."

Update Oct. 25, 1:48 p.m.:: On Thursday afternoon, BP emailed a statement to The Huffington Post in response to the whale photographs.

"As part of the Natural Resource Damage Assessment process, BP, in collaboration with state and federal trustees and several universities, participated in and funded studies of sperm whales and other large oceanic marine mammals from 2010 - 2012," wrote Ray Melick, BP's Director of Media and Communications.

Data from those studies, which include aerial surveys and vessel-based observations, is currently being evaluated, the statement continued.