A Sphynx cat in Riverview, Florida, is lucky to be alive after having an arrow shot through its forehead.

"I cried all night and was inconsolable. I couldn't believe she was gone. I just wonder if you're home and safe," Bulluck told WFLA.com.

Akila was found in the bushes the next morning with a 7-inch arrow in her head, WTSP.com reports.

“I lost my mind for a moment. I was angry and appalled that someone would do this to an animal,” Bulluck, 40, told the Tampa Tribune. “I do believe because of the angle it was intended to kill her. I can’t understand who could do that to a helpless animal.”

A vet was able to stitch up the places where the arrow entered and exited Akila. Luckily, the cat didn't suffer permanent damage to the nerves, ears or eyes.

However, the vet told Bulluck that if the arrow had entered Akila's body even a millimeter over, it would have pierced her skull. 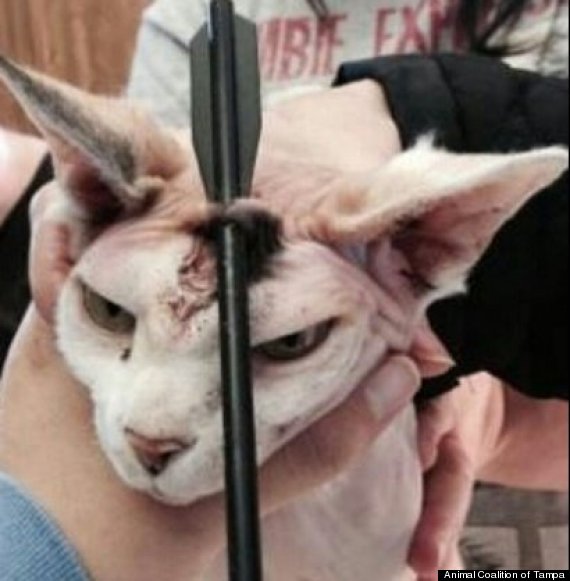 Investigators for the Hillsborough County Sheriff's Office are looking for possible suspects. Anyone with information is asked to call 813-247-8000.