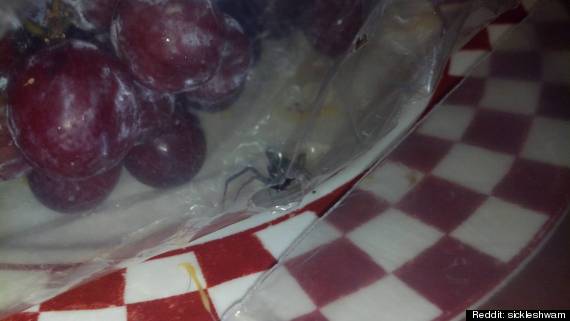 When Reddit user sickleshwam posted the above image, we were provided with the perfect illustration of why you should always wash your fruit before eating it.

The title of Sickleshwam's post explains it all: "So, I was eating grapes in the dark and noticed a lot of the grapes had a web like substance on them."

It's unclear what type of spider is pictured, but it's known that black widow spiders can be a problem in California vineyards producing table grapes. The Central Valley Business Times explains that new, less toxic miticides and insecticides, which are used to eradicate pests like mites, leafhoppers and mealybugs, often fail to kill black widow spiders.

In 2008, Fresnostatenews.com wrote that reports of black widow spiders found in supermarket grapes were cropping up in New Zealand and Massachusetts. Fresno State plant science professor Dr. Andrew Lawson told the publication that the “movement of any black widow from the vineyard to the market place presents an immediate concern to the table grape industry,” Lawson said.

In 2001, New Zealand halted imports of California table grapes after four such incidents. Trade was reopened in September of 2002 when new regulations were put in place to detect spiders.

For the record, here are the U.S. Food and Drug Administration's recommendations about washing fruit:

Wash all produce thoroughly under running water before eating, cutting or cooking. This includes produce grown conventionally or organically at home, or purchased from a grocery store or farmer's market. Washing fruits and vegetables with soap or detergent or using commercial produce washes is not recommended.