Not too long ago, our little clan took a road trip from Los Angeles to Portland, Ore. Road trips are one of those mysterious things families feel compelled to do but no one knows why, like camping in the Mojave Desert or supporting the career of Miley Cyrus. I predict in the end it won't be gay marriage that brings about the destruction of the American family. It will be the road trip.

After getting the kids settled into the back seat of our Honda Odyssey with their DVD players and movies, we hit the freeway. Once out of L.A., I was finally able to sit back, pop open my laptop, and begin jotting down a few ideas for this column. That's when Kelly woke from his nap and grabbed the steering wheel from me, babbling some nonsense about "safety" and not using my computer while driving. So we switched seats.

Relocated to the passenger side, "safely," I narrowed my list of possible topics to two: "Surviving Your Child's K-Mart Taste" and "Parents I Hate." Then suddenly -- at 70 miles per hour -- the transmission on our car blew out. And a column was born.

I'm an American, a proud gay American who was raised to believe that bad things don't happen to Hondas. Yet ours has blown two transmissions in five years.

As we decelerated, the plume of smoke belching from underneath our hood began to panic my unflappable daughter. I tried to calm her as Kelly looked for a place to get off the road. "Think of it as an adventure, honey! We're inside a fire-breathing dragon who just lost a leg!" She began to cry.

Somehow we managed to limp across four lanes of traffic to the next exit and turn down a hill into the welcoming parking lot of a visitors center that overlooked a picturesque lake. A visitors center with bathrooms and vending machines and other kids to play with. A visitors center we soon noticed had a chain-link fence around it and a propped-up sign gloating, "Closed for Renovations."

We called AAA Roadside Assistance and waited. Turkeys cook faster. An hour and 40 minutes passed as my iPod faded from Gaga to gone and the sun sank deep into the lake. The battery on our cell phone now dead, our world turned pitch black and eerie quiet.

When our Triple-A savior finally arrived on the scene, I could have jumped for joy. Instead, I froze. The white knight who showed up for our rescue turned out to be a physical composite of every high school bully I ever suffered: a tattooed skinhead-type, complete with soul-deadening stare and missing front tooth.

I hesitantly approached the massive flatbed tow truck idling before me and handed up my membership card through the cab window. Barely looking up, he grunted, "You know we only tow free for seven miles. After that it's 10 bucks a mile. You got about 15 miles to the next town." I asked if he could fit a family of four in his cab. His shrug said he'd manage.

After finishing his paperwork in silence, he finally lumbered down from his cab and stopped, getting his first, long look at my family. He stared at Kelly, then at me, then at our kids, finally speaking in the slow, guttural tones of a wife beater:

We answered that yes, they were.

Traveling as a two-dad family can have its challenges. Twice a year we visit my parents in South Carolina, a state so welcoming that its constitution bans not only same-sex marriage and civil unions but birth control and bagels. On its face, California might seem an improvement, until you find yourself stranded in the dark off I-5 in one of those counties where Prop 8 passed with 98 percent of the vote.

After attaching the giant hooks to our Odyssey -- of course, to complete our family portrait and ensure our suspect status, we were two men driving a minivan -- he moved to the side of his flatbed and began pulling mysterious levers that caused his vehicle to groan as it slowly tipped its flatbed to meet our homosexual automobile.

This was too much for our youngest, James, a boy so Bam-Bam butch that for years we've referred to him as God's joke on the gay daddies. By now he truly was jacked up by the adventure of it all. Biologically drawn to the smell of metal and grease like a moth to a blowtorch, James pushed forward and started peppering our AAA guy with questions: "Is our car dead?" "Do you have a bathroom in your truck?" "Who knocked out your tooth? Was it Batman?"

At this point Kelly intervened: "James, stay back so he can do his work." Mr. Triple-A stopped what he was doing and looked at us. "His name's James? I got a boy named James." He had six kids, he informed us, all named after famous people in the Bible. Of course you do, I thought. A home movie began unspooling in my mind, starring a toddler Moses and barefoot Bathsheba helping their brother Goliath blow up frogs by sticking firecrackers up their butts.

Then he did something unexpected, something... perfect. This man whose menacing silence and sidelong glances had me rattled took off his work gloves and asked James to hold out his hands. He then began to gently pull the huge, oil-stained gloves over our son's tiny fingers. Next he asked if James wanted to help him work the levers on the side of the flatbed so that he could haul our minivan up onto the truck. Mute with awe, James could only nod. As the chains grew taut and our car began to make its slow ascent up the ramp, James' eyes widened to the size of the moon that had finally peeked through the clouds overhead. 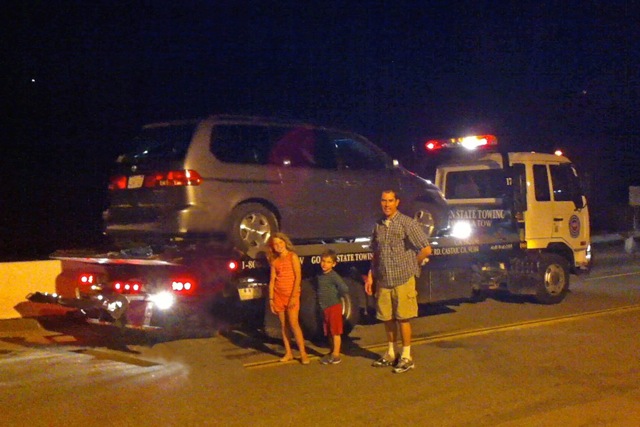 Before long we were all crowded into the cab of the tow truck for the ride to the nearest town. I never would have thought it possible, but somehow the five of us fit. My family was safe. Jesse -- he had a Biblical name, too -- pulled out his phone and handed it to us so we could see pictures of his family. As the glow from the faces of his wife and kids lit up the inside of the truck, he looked at Kelly and me and said, "So... did you guys get married when y'all had that little window a few years back, before the Prop 8 thing?"

We said that we did. "That's good," he said. "My mom did, too," he said. "She called up me and my brother and sister and told us, 'Me and Maggie's gonna have a wedding. You got a week and a half to figure out a way to get here.'"

From there on out, this man I was so sure I had pegged continued to upend my preconceived notions. When he learned we live in Hollywood, he told us that as a teenager he'd been bused in from the suburbs, commuting 20 hours a week to attend the Hollywood High magnet program in theater arts. Theater arts?

"Yep, it was great. For P.E. we took dance. Spent English readin' Shakespeare. Instead of shop, we built sets for musicals. I loved it."

He never charged us the $80 he should have for the extra mileage. Instead, he directed us to the one motel in that truck-stop town that had a swimming pool for the kids. Then he advised us which mechanic to see the next morning and which taco stands to avoid. And before lowering our big, gay minivan into the parking lot of the auto shop, he stopped to put his gloves on our daughter so she could work the levers this time, sending her into a spiral of rapture. After that he offered to drive us to our motel.

After we'd said our goodbyes and settled into our room, we made sure to sit the kids down and tell them how lucky our family had been that Jesse was the one sent to help us. Being kids, they got it: somehow the five of us fit.

After Kelly and the kids fell asleep, I got curious and Googled the name Jesse. Turns out it's Hebrew for "God's gift."

This post is the fourth in a series of Spilled Milk columns by William Lucas Walker that chronicle his adventures in Daddyland. 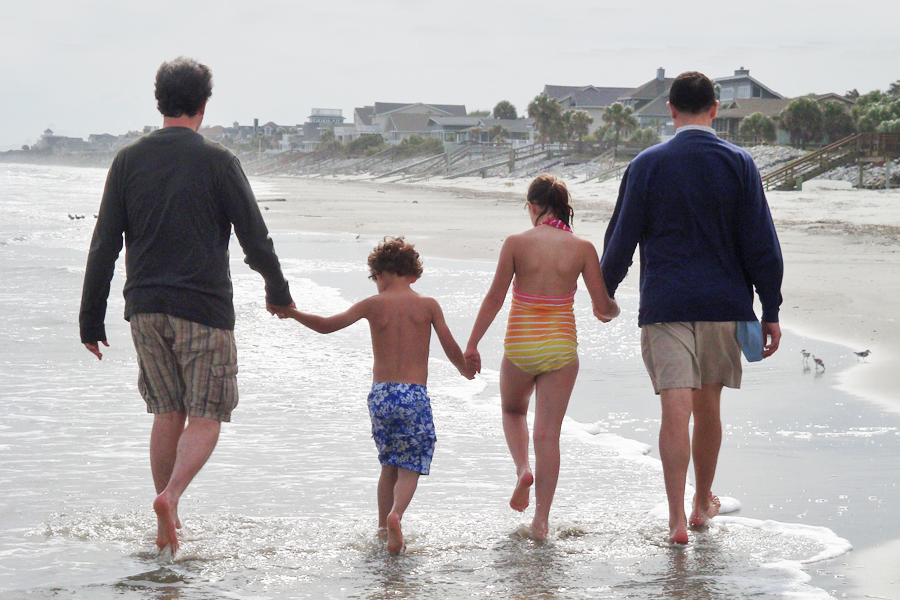 More:
road tripsprejudiceParentsgay parentsgay dads
Newsletter Sign Up
Raise the kind of person you'd like to know
Subscribe to our parenting newsletter.
Successfully Subscribed!
Realness delivered to your inbox