Georgia is a Christian outpost in a largely Islamic part of the world. Despite living farther east than Syria, Egypt, and parts of Iraq, Georgians have a strong Christian tradition. It was the third state to convert to the religion (after Armenia and Constantine's Rome) in the third century A.D., and since then, has resisted many attempts at forced conversion by invaders.

The most recent threat to Georgia's religious traditions came during the decades living under Soviet Union's state-enforced atheism. However, since Georgia's independence in 1992, Orthodox Christianity is experiencing a flourishing revival...one that I couldn't help but get swept up in.

Dutifully following my guidebook's walking tour, I slipped into a small cathedral famed to be the oldest in Tbilisi. Now, I enjoy a good European cathedral as much as the next traveler. But after many years of travel, church fatigue has set in. Another church is worth a peek, but not much more. Plus, I find myself feeling sorry for the few worshippers: Would you want to be photographed by hordes of tourists while conversing with your Lord and Savior? So my intention was to step inside, poke around, read about its history, and continue on my walking tour. But instead I ended up staying for hours. 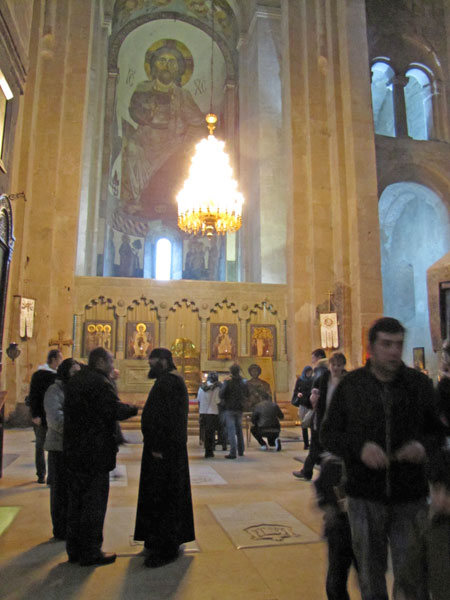 What first struck me was how busy the church was. Despite it being a Wednesday afternoon, it was packed. Mothers chased unruly toddlers. Husbands wandered arm-in-arm with their wives. Neighbors waved at each other from across the nave. Believers of all ages meandered from icon to icon -- pausing to delicately touch the glass, whisper a prayer, light a candle, kiss the corner of the frame, and rest their foreheads lovingly where they had kissed...all with the tenderness they would show a beloved grandmother.

A half-dozen priests busily performed ceremonies for small clusters of followers. On the right -- a baptism for three babies -- Priests-in-practice shuttled in holy water with large, green-plastic buckets. In the center, a casual wedding -- wearing street clothes, a young couple took their vows. During our trip, we even saw an open-casket funeral -- dead body and all. 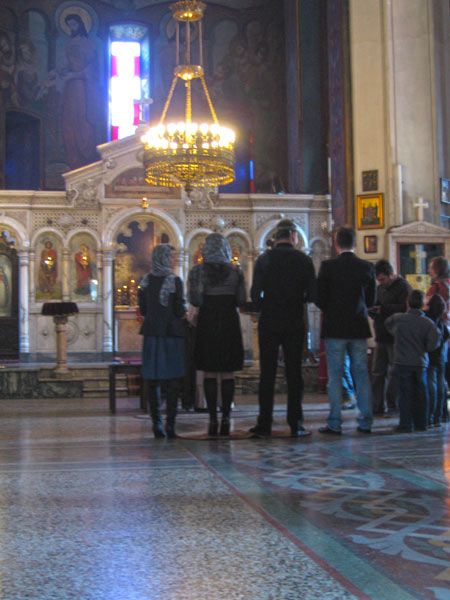 Nothing was private. Nothing closed to the public. It was community in its truest form.

The pure, sweet love these believers had for their God was palpable. As I watched quietly from the corner, I was moved to tears by their tender devotion and strong faith.

In every single church we visited, we found a similar scene. If you ever found Georgia's streets empty, you could safely assume everyone was at church. In fact, there's such a demand for church space that in 2005, Tbilisi opened one of the largest Eastern Orthodox cathedrals in Christendom. It's grand and beautiful, but its interior walls are still bare. They've started a collection to pay for a brand-new set of frescoes. 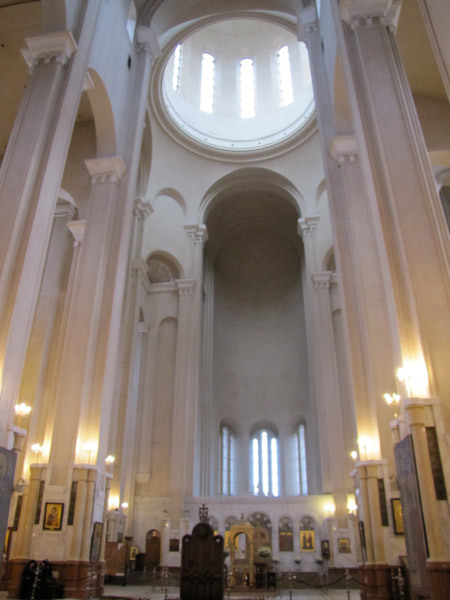 Many people try to explain away this spiritual revival: Pent-up religious fervor being released after years of Soviet rule. A show of Christian religious strength in an Islamic world. An exhibition of national pride. They may be right. But above all else, what I saw was a deep and real love of God.