"Religion" has become a bad word for many Americans. This does not necessarily mean that Americans have become any less religious. Instead, many people have come to prefer different language to describe their religious beliefs and practices. This is because the word "religion" has accumulated negative connotations. Americans tend to equate religion with Christianity. And especially, people think of guilt-inducing proscriptions on behavior, seemingly arbitrary rules, hell-fire preaching on sin and judgment, unreasoning insistence on dogma and doctrinal orthodoxy, divisive sectarianism, and aggressive proselytizing. Relatively few people want to be religious if that is all it means. Many people may prefer to describe themselves as interested in "spirituality" or the "sacred." Even many Christians dislike the word religion, and insist that Christianity is not about religion, but "relationship" with God.

Even so, public-opinion polls show that a majority of Americans self-identify as both spiritual and religious. According to one large-scale survey reported in 2008, three-fourths (74 percent) of Americans describe themselves as very or somewhat "religious." Two-thirds (66 percent) identify as "spiritual." And more than half (57 percent) accept both labels. Although 20 percent of Americans responded to a 2012 poll by declining to identify with a specific religious institution, 68 percent of the religiously unaffiliated believe in God, and 37 percent describe themselves as "spiritual, but not religious." Two-thirds of religious "Nones" affirm metaphysical or paranormal beliefs, such as the existence of nonmaterial energies, angels and demons, or the possibility of psychic communication. 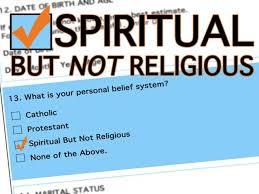 Just how different are religion and spirituality? Some people use the term spirituality to denote an individual's private seeking after sacred meaning untethered to public adherence to traditional religious institutions, doctrines, creeds or rituals. Yet, religion and spirituality fulfill many of the same functions, for instance, affirming a person's place in the cosmos and offering a sense of purpose, meaning, and hope. It may be more useful, for analytic purposes, to think of spirituality as one way of being and talking about being religious, rather than as something distinct from religion.

What then is religion? The term has been defined in myriad ways. Many scholars prefer functional to substantive definitions of religion -- not just checking off a list of distinguishing characteristics such as belief in a deity, but observing how religions function, for instance to set apart the sacred from the profane, grapple with ultimate problems of human life, or give ultimate explanations of the world.

Scholars commonly define religion to include not only theistic beliefs -- like those found in Christianity -- but also bodily practices, or rituals, that function to connect individuals with suprahuman energies, beings or transcendent realities, or cultivate heightened spiritual awareness or virtues of ethical and moral character. Religion is often expressed through symbolic actions (rituals) that establish powerful moods and motivations by supporting a worldview, or overall picture of reality, and instilling an ethos, or life philosophy of how one should live in the world.

Spirituality, even when untethered to specific religious traditions or claiming to be universal, nonsectarian, nondenominational, and accepting of diverse beliefs, fits within this broader category of religion. This is because spirituality makes metaphysical, or more than physical, assumptions about the nature of reality. Use of the terms spirit, spiritual, or spirituality, implies that living beings have an immaterial, or more than material, aspect. Spirituality, moreover, like religion, distinguishes sacred from profane; functions as a life philosophy to locate the individual within the cosmos and cultivate ethical and moral character; or aspires toward salvation from suffering existence or relationship or union with the divine or sacred.

Although Protestant Christianity was once the dominant religion in America, since the 1960s America has become increasingly pluralistic. Today, there are two broad categories of religions in America: those which are belief/Word-oriented (e.g. Protestant Christianity) and those which are practice/experience-oriented (e.g. Hinduism, Buddhism). Both types of religion share similar goals and functions, but the means may be primarily verbal for the first and primarily physical for the second.

Americans influenced by a Protestant, Word-oriented bias tend not to recognize practice/experience-oriented religions as religious because they think of religion as requiring that one believe and say certain things (doctrines/creeds). Such observers are prone to misunderstand embodied religious traditions in which practice is itself an essential expression of religion. Practice can express and instill religion even when no words are used, given an assumption that knowledge of the divine or sacred comes from experience, rather than merely intellectual study.

Many forms of complementary and alternative medicine (CAM) are religious by this definition, yet few people recognize CAM as religious. This is a reflection of Protestant-biased definitions of religion. It also reflects the marketing strategies of certain CAM promoters -- who find that they can attract more interest by downplaying CAM's religious associations in favor of the language of science and spirituality. Calling a practice spiritual but not religious assuages worries of Christians and other monotheists who consider practicing another religion idolatrous, but who can rationalize engaging in practices that are framed as universal spirituality. Even so, as future posts will explain, many popular forms of CAM take inspiration from selective interpretations of manifold religious traditions, such as Hinduism, Buddhism, and Taoism (Daoism). Our next task then will be to provide some concrete examples of specific linkages between CAM and religion.