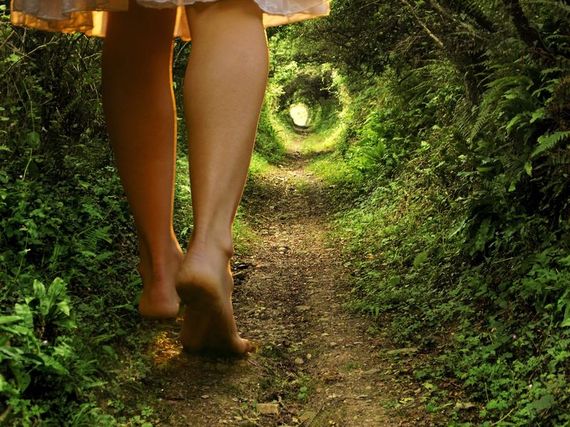 Going not too far back in time, friends oftentimes referred to me as "that girl from Legally Blonde" -- Elle Woods alias Reese Witherspoon. Just to give you a random idea of the two extremes that were clashing when I first entered a yoga studio in the spring of 2010. A girl in five-inch heels, busy growing her new business that designed and manufactured dog apparel and accessories vs. the traditional hard core yogi; barefooted and long haired, dressed in baggy cotton pants and mala beats.

Needless to say that yoga hadn't been my idea. No, my best friend can be a pain in the bum, so I eventually gave in when she kept insisting that I'd join her for class one day. And right then and there, during my very first yoga class, it happened: a spiritual emergency was triggered. Involuntarily, I fell a little too far down the rabbit hole. And I got trapped there.

Suddenly, an overload of extreme psychic abilities was activated within me, that I didn't know how to handle. Here I was, helplessly exposed to the greater truth to life, without any warning or preparation, leaving me absolutely terrified.

From seemingly out of nowhere, I heard mysterious voices talking to me, guiding my way and delivering information about life and our existence. Through visions and out of body experiences, I traveled back into past lives of mine, while not even being a believer of reincarnation. And no, the parts of my past lives I re-visited and re-lived weren't the fun and fancy ones. They were the most painful ones. The ones that forced me to look my deepest fears right in the eye.

At the time, I had zero clue what a spiritual emergency was. If I am honest, I didn't even have a clue what being spiritual really meant. But the true dilemma was that nobody around me knew what was happening with me either. Not even the spiritual tribe, that was simply mistaken it with suddenly awakened psychic abilities, thinking of it as kind of cool.

Not that they were too far off the mark. But when experiencing such an emergency, those psychic abilities happen totally out of control and with such intensity that the person affected by them is often unable to follow through with everyday life; just like in my case. It didn't take long and my business began to crumble, as I spent most of my days in deep confusion and with zero energy. Impossible to concentrate on work, I cuddled up on a sofa in my living room, desperately trying to understand what was happening.

I soon reached a point where a decision had to be made. Either I would label myself as insane and sign myself into a clinic, where my condition would be misdiagnosed as psychotic and I'd be given heavy drugs to suppress the symptoms. Or I would have to admit that there was a greater truth to life. I opted for the latter.

Each spiritual emergency is different and unique. It is not uncommon, for example, that somebody's body or psyche is being invaded by a foreign entity; good or evil. Near death experiences or out of body experiences are also often heard of. But as mine mainly revolved around past life experiences, a book by Dr. Brian Weiss, an American renown psychotherapist and best-selling author, called Many Lives, Many Masters, helped me a lot. Finally, there was someone reporting about past lives and the masters on the other side in the same way as I was experiencing them. There is numerous literature out there and finding the one that matches your experiences during such an emergency can have a vital impact.

Tragically, many people get stuck in a spiritual emergency, as oftentimes such an emergency is being triggered in a person who has zero knowledge and belief in the spiritual world and thus does not know whom to turn to. I consider myself as extremely lucky, as mine was triggered through yoga. In a way, life had directed me into a direction where many answers were to be found. Not that anyone was able to tell me what exactly was happening. But having people by my side who believed in the things I was experiencing made it much easier. That I am certain of.

If you know of someone who is experiencing a spiritual emergency, do not question their experiences, as strange and surreal they may seem. Just be there for them. Listen. Search for literature that reports about similar incidences. And search for help. There are several organizations out there that will guide the affected person through this crisis and that assist in grounding the self.

Oftentimes, people ask me what triggers a spiritual emergency. Well, there are dozens of triggers, such as illness, the loss of a loved one, deep trauma, or spiritual practices for example. But today I know that it isn't so much about what has triggered it or about what is happening. It is all about the why. Why is this happening?

During the years leading up to my spiritual emergency, there had been tons of chaos in my life, in form of physical and emotional struggles. Until one day, when I began questioning this entire existence of ours, wanting to know the meaning of it all. Never would I have read a spiritual book at that time. So the universe eventually found another way to communicate with me. It spoke to me directly, delivering answers not only to my questions but also to questions I had never asked, as the according question lay way outside my belief -- and comfort zone.

What firstly brought confusion and fear, eventually led to profound healing and total transformation. And that is what a spiritual emergency is about. It shatters your entire world only to rebuilt it again. It occurs because it is time for the individual to awaken.

Amongst some societies, it is believed that those experiencing a spiritual emergency were chosen by spirit for a higher calling, such as becoming a shaman. My personal belief is that healing and psychic abilities hide within each of us. Being healthy is our natural state and being psychic our sixth sense, which we block with an overfed lifestyle and a busy mind; two modern diseases that by our society are believed to be chic. But that is a story for another day.

My spiritual emergency has transformed me; inside and out. Of the person I was five years ago, only the very core survived. All else was left behind...