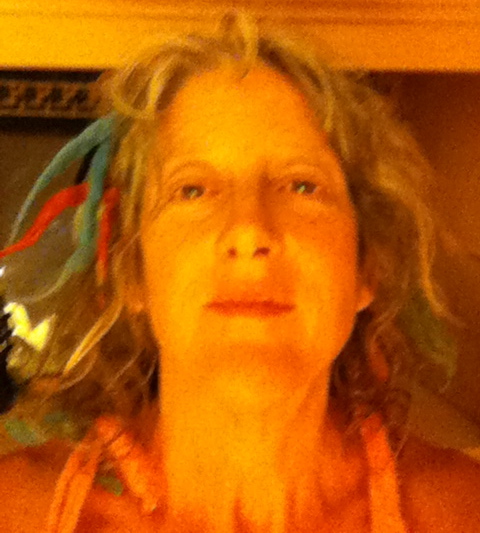 Can you imagine not wearing black? Impossible? Is it your go-to color? That's how it was for me when I stopped wearing black four years ago.

By a conservative estimate, over half the clothes in my wardrobe were black. From age 14, when I padded around the high school campus barefoot in my favorite black leotard and patched jeans; through college, where I swooped across campus in a long black wool cloak; to my 20s in the early 1980s, when I went clubbing in New York in a hip black miniskirt, to graduate school, where I wrote my dissertation cozied up in a huge black cashmere pullover. From the vintage black-lace gypsy dress I danced in through so many parties to the soft black-cotton maternity shift that cradled my belly through two pregnancies to the tight black Ann Taylor top with the portrait neckline that I wore to give so many poetry readings -- black was just how it was-- for nearly four decades.

Once in a while, during that time, people would say something about my wardrobe. Starting when I was in college, my mother used to tell me she didn't think I should wear so much black. When I asked why, she could only say that it depressed her. She said it for so many years that I never really heard. Decades later, after my daughter was born, I took a painting class. The teacher said she didn't use pure black, but darkest brown or deep purple instead. She considered pure black a color that hurt spiritual energy. I thought she was making an aesthetic mistake.

Ten years later, the daughter who used to sleep in her carseat during that painting class was starting to tease me steadily.
"Mom, you're wearing black again? Don't you ever wear anything but black?"
I got defensive. "I wear other colors!"
"Really? Well, show me," she said.

Who knows if anyone else could have achieved it? My daughter has a way of getting through to me. Or maybe it was just that the time was right.

For whatever reason, the next day I wore no black.

And it felt interesting. If I had to describe it, I'd say that "it tickled."

But, the experiment over, I went back to mostly black.

Then, just a week later, synchronicity kicked in. At the writing program I was directing, I was approached by two graduating students about the upcoming commencement ceremony. These were two wonderful, wise, women writers: a brilliant, intuitive poet of Inuit descent, deeply rooted in her culture, and a talented, thoughtful African-American novelist active in Yoruba tradition. They came to talk to me together to request not to wear the standard black graduation robes. In each of their cultures, they told me, black was considered a "heavy" color to wear, one that could interfere with one's openness to spirit.

As I thought over what I had heard from these two women from entirely different spiritual traditions, with both of whom I felt much in common on a deep level, it gave a new context to what my mother and daughter had been telling me. Looking back on my experience the previous week, I considered more seriously the voices I had been writing off for so long. And I began to notice how defensively and reflexively I had responded to my family members.

Was my attachment to wearing black simply a fashion convenience?

Perhaps it had gradually become more like an addictive habit.

Without even realizing it, I'd become so attached to black that I could hardly imagine not wearing it. What if, like any addiction, it was also beginning to interfere with the fullest living of my life? I decided to try an experiment which shocked me by how novel and radical it would be. I would not wear black for a full week and see how it felt...

And that did it. Because, after a couple of days, it felt like light. And after a few more, it felt like air. And after a week, it felt like a revelation at the cellular level. It felt like I was coming out of a cave. Pounds of internal heaviness lifted off me. After two or three weeks, I felt as if the sun were peeping out from behind private clouds.

I began removing black things from my closet -- at first just duplicate sweaters and jackets. More weeks went by and I removed more and more, finally feeling the need to purge every black accessory, down to the last belt. I put my favorite black items into storage just in case, went to the thrift shop and discovered new favorite colors. I indulged in chocolate brown and became drawn again to my childhood favorites, maroon and navy blue, after avoiding blue for 20 years.

As I went through one month after another in a body surrounded by other colors than black, I began to feel that things were going inscrutably, indescribably easier in every way. My taste in colors continued to lighten: fuschia replaced maroon, tan and apple replaced rust and sage. After three or four months, much of the heaviness I had been carrying felt flushed out, but it took at least six months before I felt as if I wasn't bearing the accumulated decades of heavy vibrational weight under my skin anymore.

At the same time, I found myself embarking on spiritual journeys I'd never expected to take, exploring new avenues of healing and strength with very little of the old fear and depression to hold me back. And -- ironically, since most people think of witches as dressing in black -- during this time I also began to grow more fully and joyfully into my identity as a pagan and witch.

About nine months after I stopped wearing black, I was going through old summer clothes and, somewhat to my surprise, felt like keeping two black sleeveless dresses. I hung them up gingerly, feeling the way I felt when I started adding the occasional cup of decaf coffee back into my life after quitting coffee drinking decades ago.

But I never did wear them. Instead, I continued the process of flushing out layer after layer of heaviness over the next three years as my palette gradually lightened still further, with clearer hues of yellow, orange, pink, white, green and blue starting to edge out the darker colors.

Recently, things have seemed to start settling. I've found myself enjoying wearing dark brown and navy again, together with lighter colors, and a few weeks ago, when a friend was braiding felt streamers into my hair, I found myself drawn to one beautiful piece of hand-dyed felted black wool in addition to the lighter yarns. We had an interesting conversation about the place of black in nature, and I felt that my journey into and out of this powerful color might finally be coming to rest in a place of balance where I could accept it as one of a palette of colors.

We'll see. But I'm not rushing anything.

US Presidential Election 2020
Breaking news, analysis and the latest polls on the presidential race from HuffPost’s politics team
See More
More:
healthy livingWomencolorLife Lessonspagan
Newsletter Sign Up
The essential guide to taking care of your mind and body
Subscribe to HuffPost’s wellness email
Successfully Subscribed!
Wellness delivered to your inbox