The following piece is an edited version of a talk delivered on the occasion of the 50th Anniversary of the Kay Spiritual Life Center at American University.

It is an honor to be part of this celebration of the 50th Anniversary of the Kay Spiritual Life Center. Today I will be talking about the role of spirituality in interfaith work and offering five areas of spiritual exploration that American colleges should focus on in order to foster a thoughtful and respectful religious pluralism.

One of the current challenges facing university chaplaincies and religious life offices is how religiously diverse our student bodies are. The recent Pew studies have shown the extraordinary range within the religious landscape in America.

Everyone comes to college with some religious background, whether that is an explicit embrace, a casual acquaintance, a passive absence, or an active rejection -- and we want all of them to be involved in the many offerings within the religious life office.

Promoting principles of spirituality that are available to all is one way to extend that invitation as broadly as possible.

Now, spirituality can be cast as weak tea. And, to be frank, can sometimes come across as a privatized mishmash of occasional practices stripped of their more robust religious origins. As you can imagine, that is not what I mean by spirituality.

Instead I want to outline five different vital signs of spiritual life that should be cultivated on university campuses. These are all equally applicable to people who identify as religious, and those who do not. And if these spiritual principles are embraced within the campus it would increase the well-being of our students, staff and faculty; offer a different way into the important efforts at interfaith understanding; and act as an antidote to the over-professionalization and instrumentalization of the liberal arts education.

Although these are not listed in any particular order, I want to start with my personal favorite --curiosity. Recognizing that there is constantly more to know is the safest guard against an overly dogmatic and rigid approach to life -- and to religion. With curiosity, each interaction with another human being, sacred text, or the natural world is an opportunity to know more, to grow, to have our hearts, minds and spirits expanded.

Curiosity reminds us that teachers are everywhere -- a rock, a history long ago, a child who needs tutoring, a classmate from a different faith tradition -- everything and everyone has some thing to teach us if we have our eyes opened with curiosity to see. To talk about curiosity in the academy inspires openness to discovery of what we didn't even know we were looking for. Curiosity is about learning, not to get the A, but for the sake of knowledge and truth, and wisdom. Curiosity is a life skill, which, once embraced, will not diminish after graduation and will ensure alums more interesting lives, safeguarded against the most obtuse of human curses boredom and ennui.

Wonder is the cousin of curiosity and another vital sign of spirituality that I would like to hear more about at the university. When I was at Princeton we had a speaking series called "What Matters to Me and Why" and one of the people who was invited to speak was a well-known scientist who explained that he was raised Catholic but now had no religious beliefs.

Yet, emotion filled his voice as he spoke about the wonders of what he saw as a scientist and shook his head at the beauty, complexity and mystery of the universe. Wonder is available to everyone, and is experienced as vividly within the arts, the environment and the sciences as it is within theology or philosophy. While not a replacement for the intellect, wonder can be described as that moment where the intellect willingly releases a tight fisted dedication to explaining and reducing and simply marvels at the world around us.

I am the proud father of a 9-month-old child whose eyes widen every time his papa shakes a glass filled with water and ice cubes. To his eyes, it is truly the most beautiful vision. Unfortunately, he will eventual learn that things are not as wonderful as they seem and that the shifting shining shapes of hard clear ice within the translucent liquid that sparkles and splashes are really just meant to be consumed. The spiritual task of wonder, often undertaken by poets and mystics, is to unlearn that, and to view the world with uncorrected vision that reveals the miraculous within the mundane.

Interconnectedness is also at the heart of interfaith dialogue. Fifty years ago, Abraham Joshua Heschel of Jewish Theological Seminary offered his seminal speech "No Religion is an Island" at Union Theological Seminary located across the street. He said: "Horizons are wider, dangers are greater ... No religion is an island. We are all involved with one another. Spiritual betrayal on the part of one of us affects the faith of all of us. Views adopted in one community have an impact on other communities. Today religious isolationism is a myth."

Our world has grown even smaller in the last 50 years. Now all news is instantaneous, and what happens to faiths in one part of the world is immediately transmitted to all corners of the globe, Rabbi Heschel's understanding of our interconnectedness is even more crucial today.

Yet the spiritual awareness of interconnectedness has implications beyond religion and applies to our all-to-frequent tendency to label those outside of our group -- whether that is our religion, race, sexual orientation, culture or nation -- as other. Interconnectedness does not dissolve these differences, but it does insist that difference need not divide. In the face of rising distrust within our own country as well as between religions and peoples around the world, we cannot underestimate how important our deep sense of interconnection and interdependence is.

Last year I wrote an article for The Huffington Post called "ISIS and the Crisis of Meaning" that came out of a discussion with experts at the Council on Foreign Relations. They offered a profile of the young men and women who were too often successful targets of recruitment by ISIS. The common denominator was that ISIS gave these often marginalized and disillusioned people a sense of community, as well as purpose and meaning in their life. Intentional reflection on meaning and purpose and the value of each individual is a crucial spiritual exercise. One of my favorite programs at Princeton was clumsily called "What Kind of Life Do You Want To Lead?" Across campus, students from very different groups and backgrounds gathered together for the sole purpose of talking about how they envision living a meaningful life.

Again, I think this goes to the core of what a liberal arts education was meant to do and yet these conversations don't happen nearly enough on our campuses. I found that one of the most startling questions you can ask a student is how their activities and classes fit into their sense of vocation or sense of the purpose for their lives.

If we don't have these conversations with our young students, there are people very willing to do it for us. Dylan Roof was radicalized by an online white supremacy website, radical religious recruiters from all backgrounds are eager to tell young people what will give them meaning and community. Developing programs around what gives their lives meaning will inoculate students against these online predators, and will also equip students to continue these reflections once they leave this campus. Every graduate should have the opportunity to consider the meaning and purpose of their life as they make decisions about family, careers, and how they will live, in service of what and whom.

Recently I watched a documentary called What Happened Miss Simone?, which tells the inspiring and difficult story of one of America's most gifted artists. The film highlights Nina Simone's deep commitment and involvement in the civil rights movement. However, the film showed in painful detail how her activism took a steep toll. There is a scene when she is with Martin Luther King, Jr. after the bombings that killed four little girls and she is so angry while singing that her voice breaks. Her daughter explains that it never recovered. Nina Simone's prophetic struggle impacted her own spirit and her relationships with her family and the world around her. Malcolm X's eldest daughter was interviewed in the film and she commented: "Participation activism in the '60s rendered chaos in any individual's life. People sacrificed sanity, well-being, life."

I lift up Miss Simone because, as I watched the documentary of one of my favorite artists, I wished Nina Simone had been better equipped to care for her spirit and her heart in the face of the violent and death-dealing racism she was experiencing. Instead, the struggle broke a part of her. As her daughter calmly explained to the camera, the mother who had been so loving became violent towards her own daughter and herself.

When I think of Nina Simone, I think of all of the students involved in the hard work of activism on campus such as Black Lives Matter and many others, and I wonder how they are caring for themselves. This is a group who, for the most part, do not have the kind of spiritual non-violence training that many in the civil rights era went through before they were allowed on their first action. But the question of care does not only apply to activists but also to those who have experienced sexual assault, or those who experience depression, or those who are struggling academically.

Many of our college campuses project a made-for-camera prettiness and perfection. But the truth is that many within the community of students, staff and faculty are suffering in one way or another.

Resilience is the last, but certainly not least of the spiritual assets that I would like to see every student possess. Tapping into practices of meditation, prayer, yoga, and non-violence training are ways of approaching well-being. Just asking the question to a student: "How are you? Are you OK? Can I help you?" Can save lives.

What is honored in a country will be cultivated, Plato said, and this is true for spirituality within the university setting. Spirituality, as I have described this morning, doesn't just happen -- it is a discipline that requires someone to care about it and to teach and promote it. The spirituality that I have explored cannot just be talked about on the margins, but must be at the heart of the campus. The five spiritual ideals of curiosity, wonder, inerconnectedness, meaning, and resilience offer a way for personal growth, academic success, and the fostering of a compassionate and just university and goes hand in hand with the mission of the University to educate as well as form productive, healthy, aware citizens for living in our pluralistic world.

The Kay Center for Spiritual Life has filled an important need for the last 50 years, and yet the need for the next 50 will be even greater. 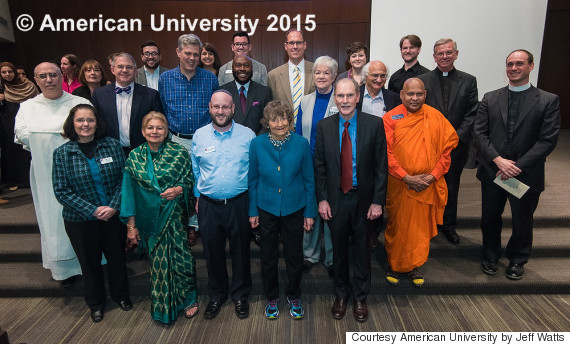