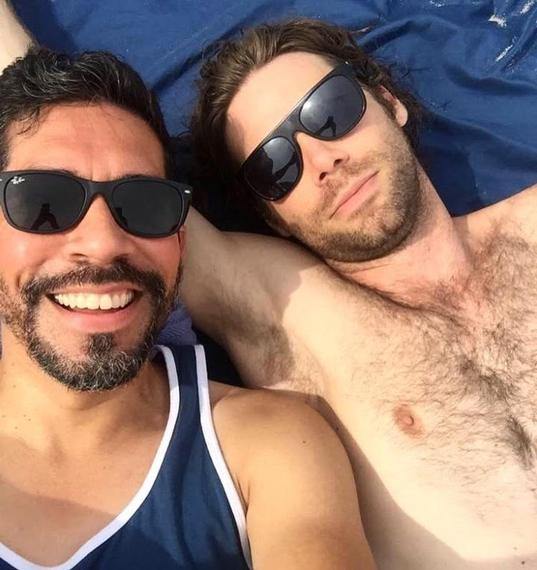 Some guy spat at our feet on the train to the PJ Harvey concert. Seemingly as unaware of our presence as we'd been of his, I assumed he was just one more person treating a public space as their private restroom and I ignored it.

My boyfriend thought differently however. Glenn got up and yelled in his face ('Why'd you do that?') while pointing at the mess on the floor. I grabbed his arm and pulled him to the other end of the train because it was nothing personal but he was pissed.

This man targeted us because we are a same sex couple.

I dismissed his interpretation because the guy was totally ignoring us otherwise, didn't even look up when Glenn got in his face. I was still psyched about the concert so after leading us to the other end of the subway car I relinked our hands and tried to predict the set list for the night ahead.

It wasn't until I got home I thought how strange it was the guy hadn't even looked up when Glenn yelled at him. Regardless of intent when spitting, human stimulus demands the eyes meet an aggressors approach, responding to visual, physical or auditory stimuli.

Lying in bed I knew Glenn was right all along, of course. If the explosive & accurate trajectory of the spit wasn't enough to convince me, the in-human and purposeful shutting down was too much to ignore.

This cowardly display of hate shocked me but not as much as the drastically different responses we both had.

I didn't for one second think this had anything to do with being gay but was the subway faux pas equivalent to loud music, eating a fragrant meal or taking up more than one seat. When Glenn yelled at him I thought he was defending public decorum - not LGBT rights.

As a mostly masculine, caucasian man from New York I had little pushback when I chose to live as an openly gay man. In fact, the majority of the time I forget I am part of a sexual minority. It's a beautiful thing but it's a privileged bubble and leaves me vulnerable when I don't realize that I am actually being targeted. Which leads me to wonder....

Would I have responded differently had I realized what was happening at the time?

Though not confrontational by nature I'd like to think I would have continued to hold Glenn's hand, maybe put my arm around him, gone for a quick kiss. If someone is offended by casual displays of same sex romance it is their responsibility to leave, not ours.

Looking back I feel both gratitude at my innocence and shame at my naïveté. The phrase 'white male privilege' rings true as I marvel at being able to live into adulthood without imagining anyone could mean me harm. I thought I'd educated myself on the suffering my brothers had lived through without acknowledging the struggle that continues every day in the very city I'm too busy loving my life in to notice.