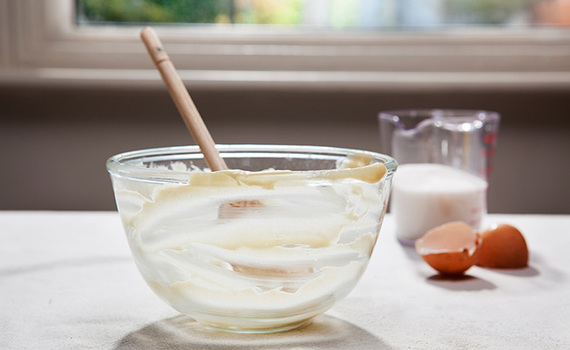 Here's a secret the food-safety police don't want you to know: You don't have to dump that half-carton of milk down the drain just because it's past its sell-by date.

Because even though you've been told that milk that's even a day old will almost certainly kill you, it almost certainly won't. In fact, sour milk actually makes certain recipes taste extra awesome. Plus, you'll save money, waste less food, and do good things for the environment. (Did you know that producing just 8 oz of milk uses the same amount of water as what you'd need for a 6-minute shower?)

Let us repeat: Old milk is not going to make you sick. Food poisoning is caused by pathogens like E. coli, Salmonella, or Listeria&mdashand it's the result of contamination. "As food ages, that natural process of decay involves a different set of bacteria and enzymes, and that process is not what leads to foodborne illness," says Dana Gunders, staff scientist at the Natural Resources Defense Council and author of The Waste Free Kitchen Handbook.

More: The 10 Dirtiest Foods You're Eating

Even so, spoiled milk tastes pretty rank on its own and you'd probably gag on it if you tried to drink it straight or use it in cereal. But baking gets rid of that weird sour taste—and things like pancakes, muffins, and quickbreads can actually get a flavor boost from spoiled milk's acidity.

In fact, Gunders prefers her sour milk pancakes to regular ones. So next time you're in the mood for Sunday brunch and realize the moo juice has been sitting in your fridge for 10 days, save yourself a trip to the store and try the recipe below instead.

Just remember to use some common sense: Even when milk smells and tastes like it's past the point of drinking, it's fine to cook with, says Gunders. But if you see any mold, toss the milk and buy a fresh carton. The green fuzzy stuff is a sign that your milk is probably contaminated with bacteria that'll make you sick. Which would totally ruin your brunch plans.

1. In large bowl, whisk flour, sugar, salt, baking powder, and baking soda until well combined. In medium bowl, beat milk, eggs, and oil. Make well in center of dry ingredients and blend in milk mixture until batter is smooth.
2. Heat large skillet or griddle over medium heat and coat with a little butter.
3. Ladle ¼ cup batter into pan to make 4-5" pancakes. Cook 1 to 2 minutes, until bubbles appear and "dry out," then flip and cook 1 to 2 minutes more. Repeat with remaining batter, using more butter for pan as needed.
4. Serve warm with toppings of your choice.

More: 5 Surprising Things That Happen to Your Body When You Start Eating Breakfast