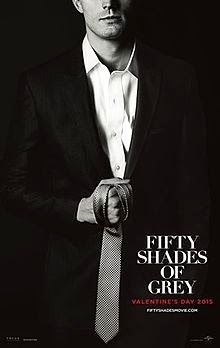 In case you haven't noticed, the campaign for the movie of Fifty Shades of Grey has already begun, in anticipation of a Valentine's Day release. Many of those who go to the movie will have read the book. But will the movie version have A HAPPY ENDING? Everyone has their own kink. In the Freudian model, human behavior is driven by subliminal motivations that the plucky protagonists of most romance novels would have little access to. Indeed in Plato's allegory of the cave, reality is only a shadow. So what if it turns out that in the movie version of Fifty Shades, the prospect of a totally submissive woman, naked, blindfolded and bound--however tantalizing that sounds--turns out to be far from what Grey is after. It only causes early onset ED or even PE (premature ejaculation). Let's say that Grey's real desire is to be yelled at in a non-sexual way that leads to the kind of humiliation that's not exciting for him or his lover. What if Grey has an unconscious urge to be nagged to death by a harridan? Now this type of scenario would create some problems in terms of the script. A movie is a different kettle of fish than a book and you're not going to have your HAPPY ENDING, you must find something uplifting in its place. Those filmgoers who read the book are going to be disappointed if there isn't some kind of pay off. Romance is romance, love is love and sex is sex. If your going to film Fifty Shades of Grey like an episode of The Honeymooners with Grey as a blustering loud mouth who is always walking away with his tail between his legs, then you still have to figure out a way to give the popcorn crunching, soda slurping sex crazed audience what it wants--whatever that is.