On Sunday, Redditor ItsNotDrew discovered an odd IMDb description for an upcoming Season 10 episode of "SpongeBob SquarePants." (Although IMDb lists that the episode aired in 2012, Season 10 is expected to return later this year.) In the episode, reportedly titled "The Other SpongeBob Is Back: Part 1," Spongebob gets killed by a character named JaySammy and Patrick "engages in armed conflict with Iran." Um, what? See for yourself, before it gets corrected: 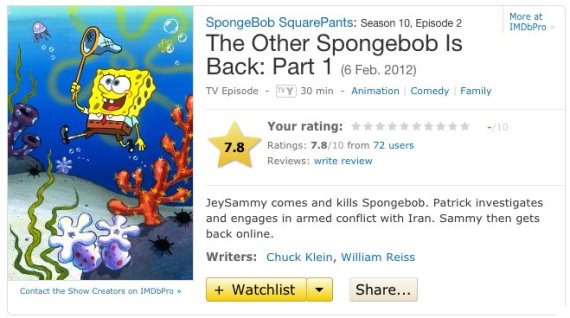 While IMDb is notorious for misinformation, the description is still pretty bizarre, even by "SpongeBob" standards. One Redditor joked that the show took a dark turn back during the Chum-Krab war (Plankton did kidnap SpongeBob that one time after all). Another user, DoctorBlueBox1, linked the description to the popular fan theory that Bikini Bottom was the result of nuclear testing (voice of SpongeBob, Tom Kenney, chimed in about that one last month). DoctorBlueBox1 wrote, "Patrick finds out that Iran has nuclear weapons and that they were used to create the anthropomorphic animals in Bikini Bottom during testing. Iran claims Bikini Bottom as part of its territory and a war for independence ensues."

Could this hint at SpongeBob's demise? Will World War III break out over the Krabby Patty Secret Formula? No, of course not. Nickelodeon confirmed to HuffPost Entertainment that the IMDb posting was "completely fabricated." Phew, all is well in Bikini Bottom.