Soccer for 13-year-old Abdel Raheem Ali Jumaa -- or Heemo as his friends call him -- has become a passion and perhaps his opportunity for a better life beyond the confines of the refugee camp where he lives in northern Lebanon. Watching the Olympics, he sees that possibility is real.

Opportunities for youth in the Palestinian refugee camp are slim. Living conditions in Nahr El Bared are difficult, job prospects are few.

But Heemo has found opportunity through his love of soccer.

Sparked by his older brothers' passion for the sport, Heemo began playing soccer when he was seven years old. With encouragement from his father, he joined a local soccer club at Beit Atfal Assoumoud, a local community organization and partner of the US humanitarian organization ANERA , which works in health, education and social welfare within the camp.

Heemo insists his life would be empty without soccer, "You can't take away soccer. It is my hobby... I feel happy when I am playing."

Like many youth in Palestinian camps, Heemo has turned to soccer as an activity for fun and an outlet for his frustrations. Dreams of a career in soccer flash across his mind when he watches his favorite players move the ball down the field. He can even imagine scoring a goal against the famous Spanish goalie Iker Casillas. 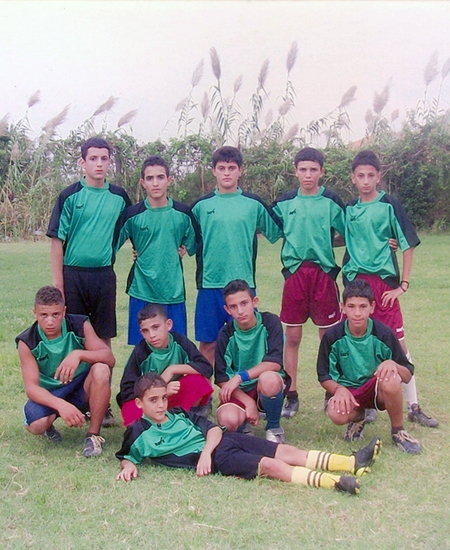 The dream of becoming a famous soccer star brings a glimmer of hope amid poor job prospects for Palestinian refugees. Restrictions on access to lucrative professions leave mostly menial job openings. Only 37 percent of working age Palestinians are employed, mostly in the agriculture and service industries.

Along with many of his heroes, Heemo began his soccer career playing in dilapidated streets and trash-strewn alleyways of the refugee camp. Nahr El Bared was set up in 1948 to provide temporary shelter for Palestinian refugees. A conflict in 2007 destroyed most of the camp and the Lebanese army has temporarily taken over the only large playing field for security reasons. But Heemo and his friends now have the opportunity to play on a proper soccer field close to home that ANERA rehabilitated.

Heemo forgets the misery of camp living when he's on the soccer field, "When I play soccer, I feel a clean breath of air in my heart," he responds while describing the emotions soccer stirs within him. "Each time I feel sad, bored or stressed out, I go to play soccer... I feel calmer. Soccer taught me to hold myself together, become calmer and less stressed...It taught me respect and teamwork." 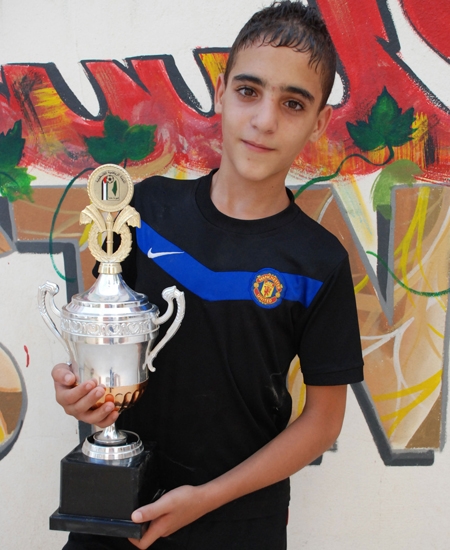 A professional career is still a few years away but soccer already has changed his life. This past year, he was chosen as one of the top players in Lebanon's refugee camps to travel with a team from the Palestinian Soccer Union-Lebanon Branch to Norway to compete in an international soccer tournament. Travel abroad is extremely difficult for Palestinian refugees in general because of their stateless status so Heemo seized the opportunity to its fullest.

Heemo scored 24 goals in six games. His spectacular performance won him the top scorer award for the tournament. He returned home to proudly show off his trophy. "When I went to Norway, I felt the world changed. Everything was well-organized. Life there is nicer."

This week, Heemo is not thinking about the future. Wearing his #10 jersey, he's glued to the TV screen watching the Olympics soccer matches. The refugee camp boundaries may confine him physically, but soccer lets him see beyond the end zone to his next goal.