"Why do we play ball?" That was the heady question my then 7-year-old son tossed out to me one day during an innocent game of backyard catch. As a father, anthropologist, and sports fan, I couldn't resist the call of duty to set off in search of an answer. Who threw the first pitch, kicked the first goal, sunk the first buzzer beater? And how did the ball, a simple child's toy, come to stake such an unrivaled claim on our time, our money, and our lives?

Against a pretty dismal modern backdrop of steroid use in baseball, NFL and NBA lockouts, and vote-selling and corruption in World Cup soccer, I wanted to peel back the layers of scandal and excess to expose the warm, beating heart of the game - uncovering the true reasons we play the games we play.

My globe-trotting investigations, captured in The Ball: Discovering the Object of the Game [HarperCollins, $14.99], took me far afield in both space and time: to a French palace, an Indian reservation, a remote Scottish isle, the Amazon rain forest, and to small-town playing fields and gyms from Ohio to Massachusetts.

Here are some of the things I learned along the way about the ancient roots of our modern sports:

The First Athletes Ever And 7 Other Moments In Sports History 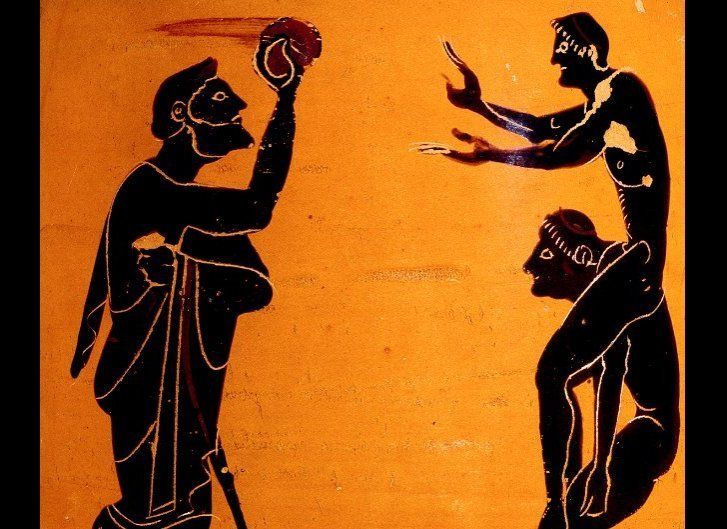 1 / 7
Ephedrismos - Off to a Weird Start
Ephe-what? Although the evidence is murky at best, it's likely that the idea of playing ball first began with our Paleolithic ancestors killing time between hunts. After all, the typical toolkit of early hunters - spear, club, rock and net - would have supplied the basic prototypes for a decent sporting goods store. But the earliest ball game to appear in the historical record was an odd form of people polo first recorded in the Sumerian Epic of Gilgamesh, ca. 2500 BC. Apparently more than a passing fad, this wacky parlor game, which involved tossing a ball back and forth from the shoulders of teammates, was played from ancient Egypt to classical Greece - where it was known as ephedrismos (pictured above on a Classical Greek vase). Warning: don't try this at home.
Ashmolean Museum, University of Oxford, UK