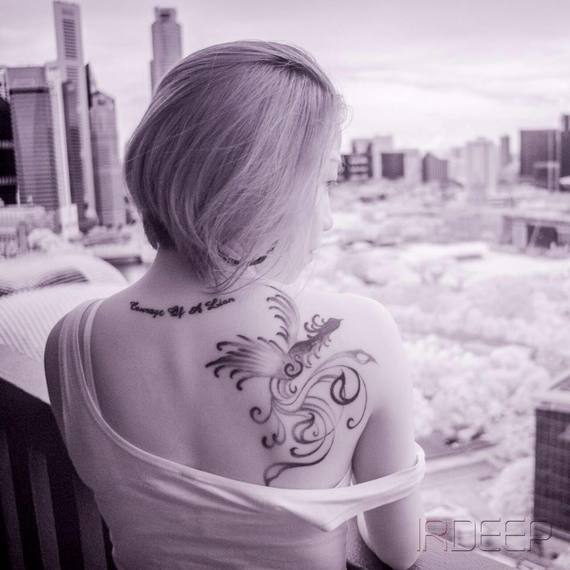 For the very first time, Shiney Sparks reveals the hidden stories behind all of her tattoos.

"Tattoos, for me, are like a timeline of my life. I could look back at certain tattoo, and it reminds me of a certain time in my life and why I got that tattoo." - Tyga

I used to be a timid girl. A girl who was bullied. A girl who failed to stand for herself, let alone for others. But I was also the girl that knew that girl was not the real me, the girl who wanted to break out from that shell and be who she really is.

I was also a girl whom for the first time fell deeply in love with a guy, who eventually broke her heart and crushed her into pieces. A girl who lost total control of her life for one whole year.

Until one day boxing took over me. Boxing changed my life -- one punch at a time. It brought me back to reality. It taught me how to regain control. It taught me how to pick myself up. It gave me courage and confidence. More importantly, it broke me out of that shell, so that I could become who I really am.

A tattoo was something I always wanted to have. One of those things on my bucket list. But I couldn't bring myself to do it. I am scared of pain, and I am especially scared of needles. The thought and the sight of them makes me weak in the knees. Still I knew, there would be a day that I would have my tattoo.

One Saturday morning as my boxing friend and I were lying on the floor after our training. I turned to her and asked her about her tattoo. Strangely, as I sit here today, I can't remember her name, her tattoo, or exactly what we said to each other. But I do know that after our chat, I was determined to get one. I did it on the very next day.

I was ready to move on from my first relationship, and I wanted my first ink to remind me that I can be brave and leave a hurtful relationship. I also wanted a reminder of what boxing has done for me. Courage. An ink about courage. I wasn't sure what would be a good representation of courage until the phrase "Courage Of A Lion" was mentioned in several books I was reading. Not one book, but two at the same time in their introduction. I knew this was it.

So on May 19 2013, I inked "Courage Of A Lion" across the top of my back between my shoulders, to remind myself to have the ability to stand for something or myself even if it means to stand all alone, and also to be like a lion. When I am chasing my challenges, dreams and goals, I want to have the full courage and the determination to go after it day after day until I get it or get there. 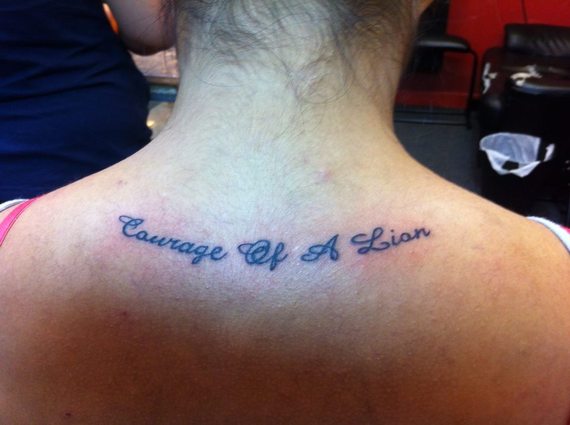 My second relationship ended in a way that I never expected. My ex left without saying goodbye. He just left me a text saying that he was at the airport and that he was leaving for good. It took a lot of courage to be in a relationship with him, but it took even more strength to be able to pick myself up after he ended it.

So on October 31, 2013, I inked a freehand drawing of a rising phoenix on my right shoulder. It symbolizes the ability to rise above troubled times and also represents victory over death. We all go through rough patches and troubled times in our lives and when we do, we usually seek a new beginning. This ink will always remind me that I (will) have the strength to overcome any trouble in my life.

And when they seek to oppress you. And when they try to destroy you. Rise and rise again and again. Like THE PHOENIX FROM THE ASHES until the lambs have become lions and the rule of darkness is no more. 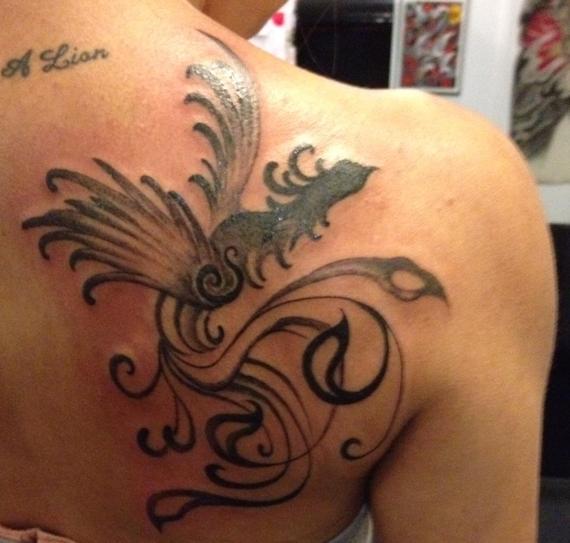 There was a period in my life that I spent with a guy with whom I did a lot of crazy things. A guy who encouraged me to let loose and seek out experiences, to go for crazy things in life. I liked him, but it didn't work out between us. This time, I wasn't sad at all for ending a relationship. Instead was glad to have met him. Because of him, I have become a women who will go for experiences and adventures whenever I can.

So on May 19 2014, I decided to ink my third tattoo "l'amour fou" on my left forearm. It means "crazy love" in French. I got it to remind myself never to settle anything less than crazy, passionate, extraordinary love. And also to remind myself that kind of love does exist.

"Unless it's mad, passionate, extraordinary love, it's a waste of your time. There are too many mediocre things in life; Love shouldn't be one of them." 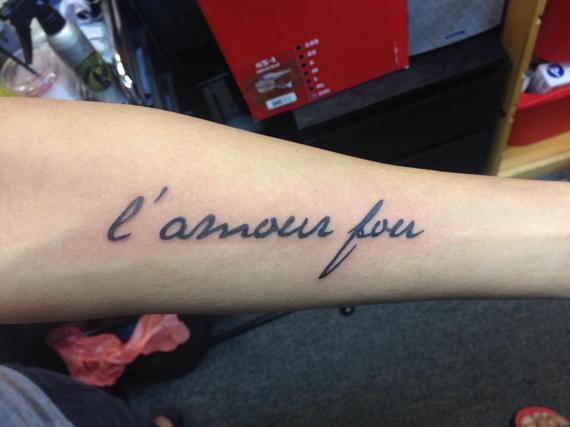 Shortly after I inked "l'amour fou," I met a guy. He was the only guy who gave me butterflies in my stomach. There was a special, magical feeling between us and both of us are aware of it, but because of our time difference and long distance, our relationship didn't work out afterall.

So on October 8 2014, I decided to ink my fourth ink, a freehand drawing of a tinkerbell on my left forearm. It represents the ability to believe in the magical happily ever after, for each moment of my daily life. It is my own symbolic meaning of believing.

"Those who don't believe in magic will never find it." - Roald Dahl 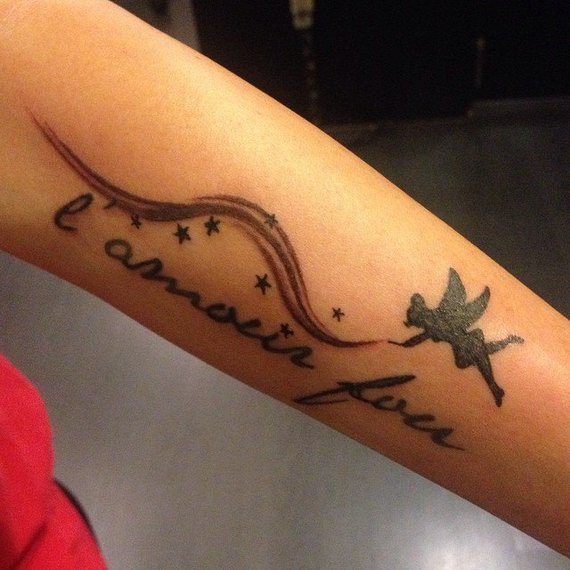 The last two decades of my life have been tough, not only in my love life but also in other aspects. As I was approaching a new decade, I decided to get my last tattoo, a tattoo for myself. Not for any guy or anyone else. A tattoo that symbolizes abundance. Abundance of love, abundance of happiness, abundance of everything that I ever need. More importantly, a symbol of what I want to be a blessing to children and youth.

So on March 11, 2015, I completed my fifth ink, a freehand drawing of a peony, which I inked on my left shoulder cap area. The peony is known as the flower of riches and honor. It carries a traditional meaning of romance and prosperity, and is regarded as an omen of good fortune and a happy marriage. 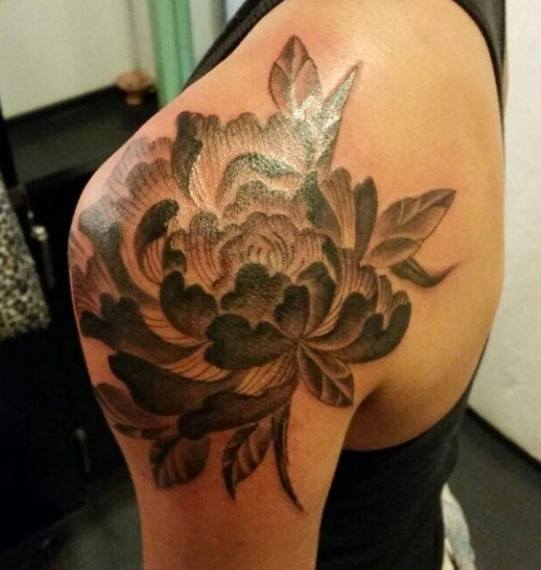 Courage. Strength. Love. Belief. Abundance. These are the key themes behind my tattoos.

This post originally appeared in The Good Men Project