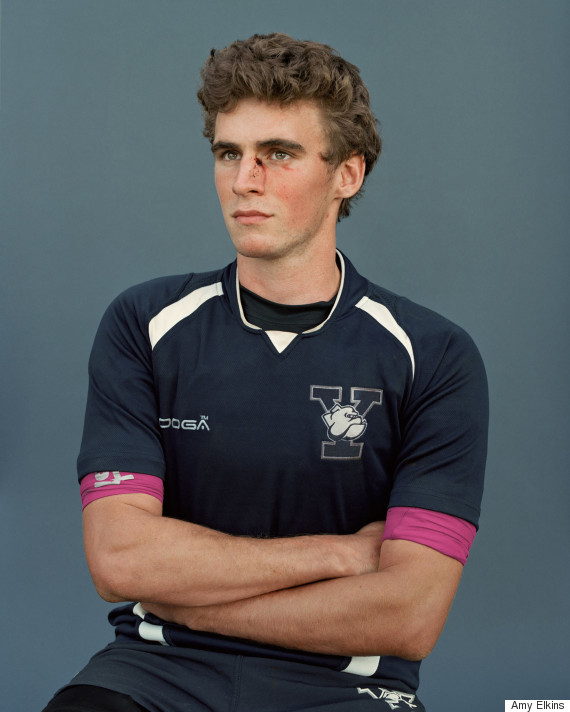 A young man sits proudly, arms crossed. His steady gaze is fixed on something we can’t see. He’s posed like a classical figure or a prom king in a yearbook photo -- the latter might’ve been true at some point. He’s an athlete on the Yale rugby team, and although his portrait gives him a regal air, he’s got a bloody gash just short of his eye.

The photo is from a series of portraits taken by Amy Elkins, a photographer whose work often focuses on how we define masculinity. The series, "Elegant Violence," will be featured in a show aggregating art concerning sports this fall.

Elkins had been grappling with how to capture the physical impact rugby has on its players, as a contact sport for which players wear little padding or physical protection, when she stumbled upon vintage portraits of athletes in glorifying poses from as early as the 1870s.

“Something about the mix of those two worlds clicked and made me want to make formal studio portraits like the ones I had seen but on the sidelines of these hyper-violent games, showing the wear and tear of the game on each player,” Elkins told The Huffington Post.

Elkins acknowledges that the sport is among those that marry violence and masculinity, but that this problem is made more complex when considering the safe outlet for aggression the sport can offer.

“I think it can certainly be a problem to portray masculinity and violence as one and the same because it reinforces the idea in young boys that they have to be violent to prove that they are men," she said, with caveats, “That near-savage state of play in the rugby matches I went to seemed to always dissolve shortly after the game ended. It seemed in many ways a place to let off steam.”

Her work is especially compelling when compared with a more recent photo project by Alejandra Carles-Tolra, who photographed the Brown women’s rugby team -- one of only a handful of all-girls varsity teams in the country. She aimed to represent the influence of team sports on identity, and claims that the typically narrow stereotype applied to rugby is complicated on a women’s team.

“Rugby has a complex identity that is often simplified, and hence the identity of those who play it, especially women, is often also simplified,” Carles-Tolra told The Huffington Post. “I'm interested in enhancing the dualities that define both the sport and the athletes: violence and grace, weakness and strength, masculine and feminine.”

View Elkins's work at The Sports Show later this year, and Carles-Tolra's work on her portfolio.

This article has been updated to specify that Brown's women's rugby is a varsity sport.