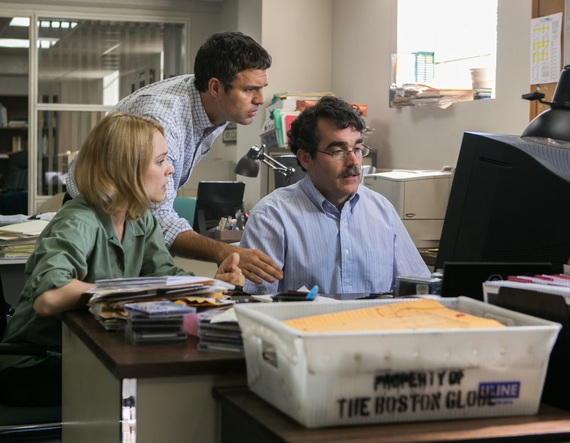 The trailer for Spotlight, features a haunting piano score, sweeping footage and some touchy interactions. A cover version of XTC's "Dear God," creates an especially unsettling vibe. So naturally, I anticipated thrills and chills when I attended an early screening of the movie about the pedophile priest investigation in Boston. This expectation was reinforced when "based on a true story" floated on the screen. For most moviegoers, this translates to: loose with the facts and a "Hollywood" treatment of the script. I waited for eerie footsteps following the characters in the dark. Sexual tension between the reporters. Maybe a love triangle. Surely I had to prepare myself for some nightmarish flashbacks. I was expecting cinema at its sensational, most insidious best.

Instead, Director Tom Mcarthy's movie hugs the story of the 2001 Boston Globe investigation of abuse by pedophile priests like a tight sweater. The movie is a down to earth, gritty, true portrayal of a group intrepid reporters and how they expose the Catholic Church through rock solid, investigative journalism. The movie is as meticulously researched as their Boston Globe Spotlight expose′ that rocked the world. The newspaper story had to be "bulletproof," said former Globe editor Ben Bradlee Jr., at the Boston premiere. (He is portrayed in the movie by John Slattery.) And because the Globe got the story exactly right, McCarthy and writer Josh Singer got the script exactly right. And the actors got the acting exactly right. In fact, they are so technically skilled, Sacha Pfeiffer (played by Rachel McAdams) learned mannerisms she didn't realize she had. The movie is a collaboration of epic proportions, mindful of every last detail, from speech patterns, to the aqua subway tile in the police station and the Dunkin' Donuts cups on reporter Matt Carroll's desk (portrayed by Brian D'Arcy James). Every aspect of the production was painstakingly analyzed, fact checked, re-read and double checked. Singer and McCarthy were so intent on accuracy, they even let the real reporters review the script.

In Spotlight, the Globe reports on pedophile priests sporadically. It takes a new editor, Marty Baron (perfectly played by Liev Schrieber) to delve deeper to uncover a systemic problem involving nearly 100 priests and knowledge of the crisis at the highest level. Stanley Tucci, who plays victims' advocate Mitchell Garabedian, says it best, telling a reporter that it often takes an outsider to recognize something that's way out of line. Baron is serious, bookish, Jewish and not a baseball fan. He's the consummate outsider in a sports obsessed, back slapping town with a large Catholic population. Ever the stalwart captain, Baron deftly navigates the ship, changing the direction of the newspaper. He is the heart and soul of this story.

Already, Spotlight is swimming in critical praise. This week, McCarthy and Singer won a Hollywood Screenwriter Award and this will undoubtedly be followed by several Oscar nominations. But the movie won't be a commercial success when it opens in U.S. theaters on Friday. Although the blockbuster article produced by the Spotlight team has had national and international ramifications, the movie is just too local for most audiences. (The actors are all dead ringers for the real reporters, but no one will notice.) It also plays more like a documentary than a Hollywood movie. Only area news junkies of a certain age will be amused by pot shots taken at The Boston Phoenix. (In one scene, Garabedian tells reporter Michael Rezendes that the (now defunct) paper already covered the story about pedophile priests. Rezendes gets a few laughs from the local audience when he says, "But nobody reads it! They're broke."

The good news is that Spotlight will resonate for years to come in specialized circles. University, college and high school journalism teachers could base entire classes on the film. And it will be fodder for endless discussions in ethics classes and in law seminars. The movie is a monument to in-depth, tenacious, policy changing, accurate journalism. We won't run the story until we get it right," says Spotlight editor Walter (Robby) Robinson to Rezendes, who is anxious to get it out. (Robby is played by Michael Keaton, who does a great Boston accent.) As Rezendes, Mark Ruffalo gives a first rate, passionate performance, as always.

Despite Pfeiffer's lead character, there could have been more of a substantial female presence in Spotlight. Surprisingly, Globe veteran Eileen McNamara, whose column on defrocked priest John Geoghan is the impetus for the story that launched a thousand investigations, has a surprisingly limited role. Played by Maureen Keiller, more lines would have balanced this (mostly) all boys network and underscored the importance of women in the field. (Not to mention she has a killer local accent.) Elena Wohl, Robby's wife Barbara, could have provided more insight into her husband's character, who was probably under the most stress. Unfortunately, like Sienna Miller's character in "Black Mass," Wohl was edited out of the final film.

The courage of Pfeiffer, the only female member of the Spotlight team, is remarkable. Most young women would have been scared to death researching this story, given the power of the institution under fire. Investigative journalists are a brave bunch, but wouldn't she be constantly looking over her shoulder? Checking the back seat before she got in her car? I wondered if she had nightmares. Or if she lost weight. The film is true to form, though, as the real Pfeiffer seems as composed and as cool as a cumber. Her movie character's a rock and an impressive role model.

Aside from first-rate acting, the cinematography and art direction of Spotlight are superb. Each scene is painstakingly crafted.The bleakness of the interiors contrast sharply with the city of Boston, laid out in its glorious, seasonal beauty, amidst the backdrop of the Catholic Church and the many victims left in its wake. A montage, juxtaposing children in the church choir singing "Silent Night" while reporters put the finishing touches on the bomb they're about to drop, will break your heart.

Just don't expect thrills, chills and suspense from Spotlight. Instead, be prepared for a precise, no nonsense depiction of investigative journalism and its hardworking reporters, a remarkable cast and a compelling, original script that chronicles one of the most consequential stories of all time. That movie won't let you down.