Photographer Lisa Kereszi's exploration of haunted houses--the kind that go up for Halloween and are taken apart and put in storage afterwards--goes by the tentative title: Haunted. The project began in the fall of 2004 as an offshoot of her work on the nocturnal, escapist spaces she focused on as a graduate student at the Yale School of Art. She has been photographing haunted houses almost every fall ever since.

Much of her graduate work focused on the places we go to forget who we are, or to be somebody else: bars, strip clubs, back rooms, peep shows, cheap motels and amusement parks. Haunted houses are, in a way, a logical continuation of her investigation.

Her approach isn't that of a documentarian or photojournalist, showing the frights and sights how they are supposed to be seen and felt. Rather, Kereszi aims to examine her subject with candor under the harsh light of day or a bare, dangling utility bulb. Haunted exposes the behind-the-scenes mechanics of our man-made fears, and reduces them to the cheesy, artificial constructions they really are.

Recent reports claim that haunted houses and horror films have proliferated in recent years due, in part, to the recession. This supports the notion that people need to escape real life fears by entering fabricated worlds--like the ones Kereszi captures--in which the frights are completely safe.

Meanwhile, Kereszi claims to actually be afraid of real "monsters" and doesn't like scary movies. She doesn't even really like amusement parks. "Losing control," to Kereszi, "is terrifying, in a way." Haunted is her attempt at understanding others' fantasies of escaping reality.

Kereszi's pictures, however, are not straight-up fantasies. They are shot during the day, so all the cracks and seams show, and thus the fantasy ends up failing. The fears we hold dear are stripped of their power when their seams and backsides are revealed.

Kereszi mentions two sources of inspiration for the project: a photograph of Coney Island's Spook Show in Diane Arbus' Revelations she must have seen long ago and been subconsciously influenced by, and a childhood memory. In this memory she recalls going to the children's level of Brigantine Castle, a walk-though "dark ride", near Atlantic City, N.J. "There was a grown-up part upstairs that always lived in my imagination," said Kereszi, but she was never able to go there because the castle burned down. "That always bugged, well, um, haunted me."

For more on Lisa Kereszi and her work, please visit her website at www.lisakereszi.com. 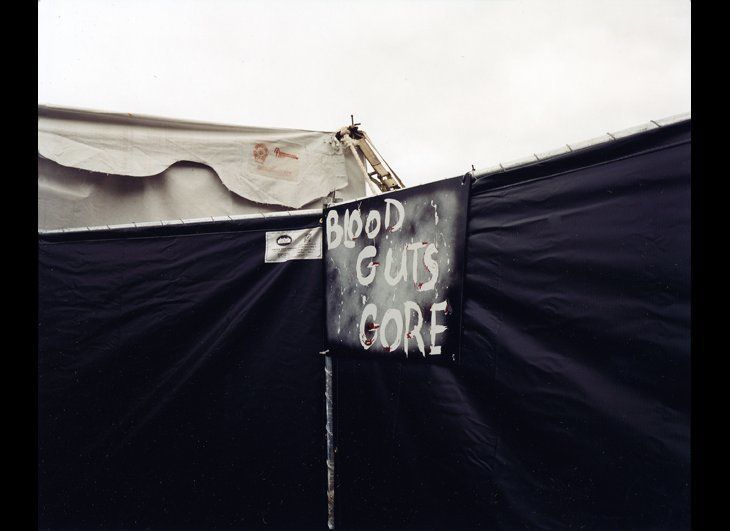