Attention about the scourge of childhood sexual abuse and New York's archaic statute of limitations has never been greater than it is right now. Outrage about case after case where perpetrators have been hidden and slipped away from justice is making the front page of news. So can we take action now, please?

The Tuesday program will include a roundtable where abuse in sports, schools and families will be discussed by a panel of experts and survivors. The second day has been inspired by the Academy Award-winning film Spotlight which helps us put the focus on hidden abuse in the Catholic Church and related SOL issues in NY State. 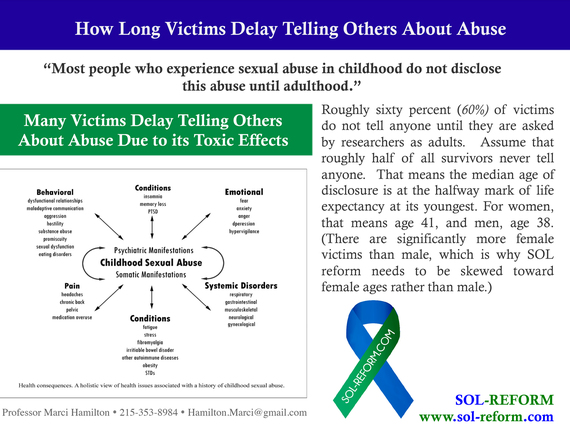 Our existing New York laws are so terrible that we rank among the very worst among all 50 states in America for how the courts and criminal justice system treat survivors of child sex abuse.

Many of you have long been part of the battle to change our bad laws and I'm reaching out today to ask you, once again, to join me in Albany to let the Governor and State Legislators know you want them to act.

Our goal is to enact A2872A/A63A, which will completely eliminate the civil statute of limitations for child sex abuse offenses in the future. It also includes a one-year "window" where older victims can go to court against abusers and those who hid them. A companion bill A8567/S6436 will completely eliminate the criminal statute of limitations for these crimes.

Because of the strong support that CVA already has in the Assembly, with more than 60 co-sponsors, we want to concentrate lobbying activity on members of the State Senate during these two days.

I hope many of you will be able to come to Albany on May 3-4 to speak directly to our state government, but you do not have to wait to make your views known. Speak to the people at the very top by writing, emailing or calling our leaders.

Following is a schedule of key Lobby Day events.

· 2:00 pm - Roundtable hosted by Assemblywoman Markey and Senator Hoylman on how the themes from this Academy Award-winning movie impact New York State and all of America. Moderated by Professor Marci Hamilton and including participation of Oscar-winning screenwriter Josh Singer and figures from "Spotlight". Other participants will include representatives from Bishops Accountability, Call to Action, Catholic Whistleblowers, SNAP as well as clerical sex abuse survivors.

· 5:00 pm - Screening of "Spotlight" for Lobby Day participants with special invitations to all members of the Senate and Assembly. (in location outside LOB building TBA)

Call. write, fax, email to tell these government leaders to support A2872AIS63A to reform statute of limitations for child sex abuse crimes. We need to protect children not predators.

Counsel to the Assembly Speaker

The above action alert has been created by Margaret M. Markey, Member of Assembly, 30th District, Queens. Get more information about the child sex abuse statute of limitations on SOL Reform.