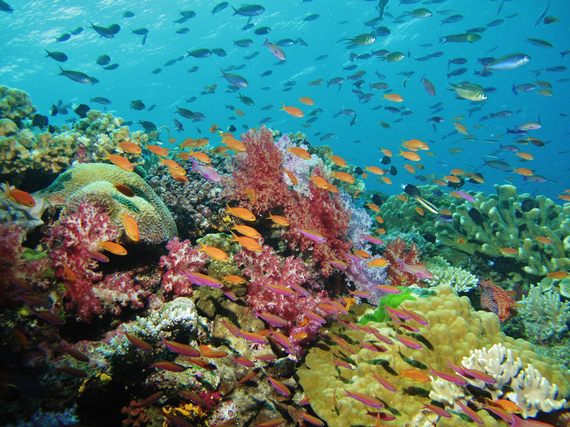 It was tough to read the news a few weeks ago. My news feed was inundated with articles about islands being built on top of coral reefs from The Huffington Post, New York Times, and Washington Post, among others.

China's recent efforts to build and expand islands in the South China Sea have serious geopolitical implications. But beyond any international jockeying, China's actions have environmental consequences that will affect the very future of coral reefs.

The world's oceans have thousands of isolated reefs and atolls like those in the Spratly Islands. These reefs--far from the local threats that emanate from large human populations--could be some of the most important refuges for corals in the future. Before humanity moves farther forward with the destructive practice of building islands on top of reefs, we should be clear about the environmental and social costs.

Corals are living animals and some of them build rocky calcium carbonate skeletons which, over time, accumulate to form reefs and low-lying islands. When people pump sediment into piles to form new land, they literally bury corals alive with the skeletons of their ancestors.

The kind of construction that is visible on the Spratly Islands is devastating for corals, not just because individual corals are dug up and buried during the construction process, but island building also triggers a host of indirect threats known to harm corals like changes in water flow patterns, pollution from land-based activities, and the risk of heightened fishing pressure from new residents on the manufactured islands.

All of humanity has a stake in the future of coral reefs, which house one of the greatest concentrations of life on the planet. One out of every four ocean species calls a coral reef home, even though the reefs themselves occupy less than one percent of the ocean. Coral reef coastlines are home to roughly 850 million people, and reefs supply millions of people around the world with economic benefits through fishing and tourism--more than 100 countries benefit from coral reef tourism and in some of these countries, tourism accounts for more than 30 percent of their earnings. Coral reefs also protect coastlines from damaging storms. Some nations, including the Maldives and the Marshall Islands, are comprised entirely on natural islands made from coral reefs.

Coral reefs are already in decline around the world from localized environmental changes like overfishing and coastal pollution. At a global level, rising atmospheric carbon dioxide is changing ocean temperatures and acidity in ways that scientists predict will be increasingly harmful to corals in the future. Coral reefs will have a better chance of adapting to global environmental changes if we reduce the local threats, not add to them. Unfortunately, projects like those observed recently in the Spratly Islands fast-track reefs for further decline, eroding their natural ability to adapt to environmental change.

While the juxtaposition of before and after photos in the Spratly Islands might symbolize China's expanding political and economic reach, it is also a scary glimpse into a possible future of coral reefs around the world. China is not alone in this kind of development on reefs, which was done for military purposes by the United States and Japan during World War II, and even more recently within the Spratly Islands by countries like Taiwan, Vietnam, the Philippines, and Malaysia.

If we are serious about saving coral reefs and the many benefits they provide to wildlife and people, we must resist the temptation to engineer small platforms of land aimed solely at flexing geopolitical muscle. Instead, we must prioritize conservation and management actions that allow corals to thrive.