It all started when one husband emailed his wife a spreadsheet tracking all times she turned down sex. It's an unbelievable, passive aggressive gem, so of course the doc went viral after the wife posted it on Reddit.

Now, the site Guyism has released another spreadsheet, this one based on the sex diary of a wife who chronicled all the times her man didn't want to do the deed. 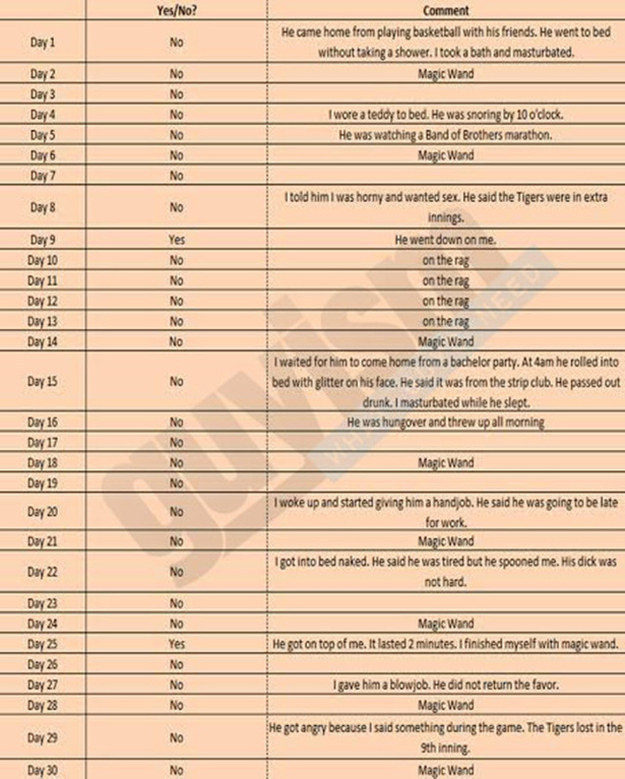 Guyism also included an email providing some context on the diary. Apparently, the woman began keeping track of the couple's sex life late into the marriage, which eventually ended in divorce:

So a girlfriend of mine had this awful husband. He was a nice enough guy but he didn't pay attention to her and NEVER wanted to have sex. We knew things were bad but she was quiet about it. She's a great girl who deserved better.

Anyway, she finally got tired of his shit and filed for divorce. This was a few years ago. On the night the divorce was final we went out and had a few drinks. There were 10 of us there. She got really drunk and gave us details about their sex life. Like really intimate stuff. Too many details to tell you the truth. She told us that after a few months of marriage, she began keeping a diary of everything that happened. Like everything. We asked her what she meant by that and she told us she would send it by email.

A few days pass and we don’t hear from her. Then like in the middle of the night, a bunch of us get this pdf file. She scanned pages from her diary. It was so beyond funny…I felt terrible for reading it. We all laughed about it for a few weeks.