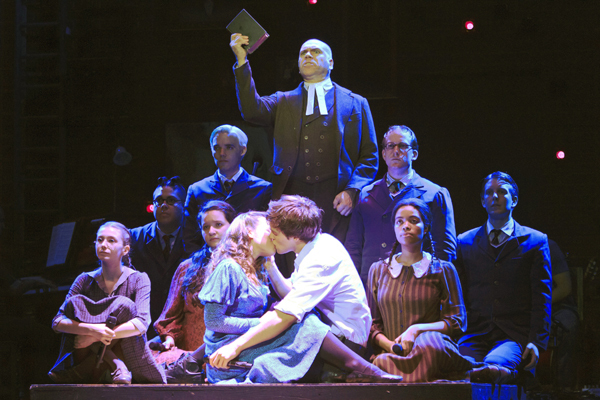 Watching the touring company of "Spring Awakening" at their premiere night at the Pantages Theatre in Hollywood, CA was awkward at times; but then again, so was puberty so that's the point. Watching all the foibles and fumbles everyone goes through when it comes to sexuality and growing up, seeing them played out on stage can not only hit close to home, but can make someone downright fidgety.

The play's themes are so universal they span time. Originally written in Germany in 1891 by Frank Wederkind the play was actually banned for some time due to the subject matter: teens coming of age sexually, dealing with societal pressures and confines and finding out the they don't fit, things don't add up, that their bodies are saying something that their parents aren't and that there's sexual secrets in all families, even the best of them.

This rock musical adaptation with music by Duncan Sheik (yes, that Duncan Sheik) and book and lyric by Steven Sater roared in to the Pantages in full Hollywood fashion, with limos and celebrities, red carpet and lots of flashes going off. It's great that Los Angeles still has the Pantages in full glory (thanks to a Disney rehab years back for the debut of the "Lion King" and Nederlander's management); a little piece of Broadway theatre and excitement on Hollywood Blvd. There is something about live theatre, small and large, and anyone that hasn't been to a big production, should. Yes, even in a down economy. Especially in a down economy. If you can find a way (and there's many half priced ticket outlets and discounts), see theatre.

My date for the evening had never been to a premiere and even after 32 years of them I still enjoy them. Richard Schiff sat directly behind us, and I just kept thinking I'm feet away from Toby from the "West Wing" (a show I miss greatly) and a great actor; singer / songwriter Melissa Manchester milled about as Margaret Cho found her seats, Camryn Manheim, Michael Gross, Lorenzo Lamas, Max Adler, super choreographer Kenny Ortega (Michael Jackson), on and on. There's something magical in these nights, in Hollywood, in theatre. That magic sells billions each year and has crafted dreams for decades, one of the United States' biggest exports and industries remains the Entertainment Industry, theatre included. Yes Los Angeles celebs and audience came out to see why "Spring Awakening" won eight Tony Awards including Best Musical and stir up just a little stardust.

It's an inventive production, one that reminded me oddly of another Rock Musical that changed things for theatre (and film) "Hedwig and the Angry Inch." Both dealt with sexual identity and discovery, both had bands on stage with them, rock bands, instead of the traditional orchestra and at key moments of the story both used rock-themed songs to tell an important part. Oh, and John Cameon Mitchell's Hedwig was from Germany and this play is set in 19th Century Germany. And sexual repression rules the day.

While the themes are universal, the presentation is far from ordinary. Musical numbers are separated out by the cast grabbing hand held mikes instead of the traditional hidden body microphones, often with microphone stands and other production typical of a music artist's stage show and not a play. Then, it's mikes away and back in to the scene; and oh the scenes.

Remember puberty? Remember (guys, mostly) someone knocking on the bathroom door or bolting in to the bedroom just at the WRONG moment? The embarrassment? Well, imagine what's going on inside the bathroom, yes, the masturbation, being set to song. So, as a young blonde star, in this case Devon Stone, pumps under his bathrobe to the music dancing girls swirl around him. When Christopher Wood's Melchior and Elizabeth Judd's Wendla figure out a lot can go on in a dark hayloft, we actually see the sex act (implied, but some partial nudity) and then the awkward moments thereafter. When Aliya Bowle's Martha is told to "be sure you put on that lovely nightgown, the one daddy got you that he likes so much..." we don't have to be told what that means, the song "The Dark I Know Well" makes it very, very clear. And Stone returns in another scene where he finally makes a play for his object of affection--another male castmate--and the resulting scene provides some comic relief; in fact, the gay relationship is rarely touched upon although present throughout. 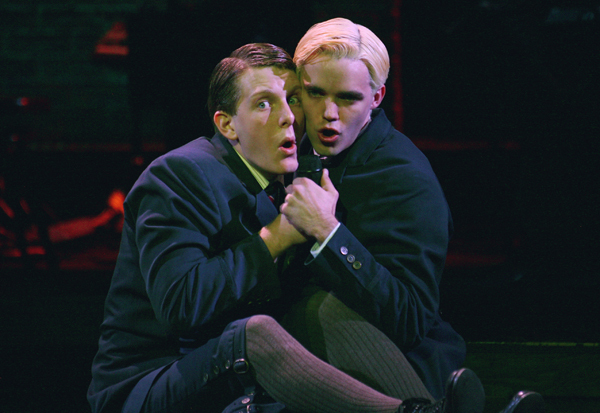 Almost every stress point an adolescent can face at that time is examined, from unwed pregnancy to teen suicide, and it's all filtered through the pressures the kids are under from parents and society, especially religion. Finding out who you are, discovering who you like sexually is a never ending process, and changes in time. Sexuality is fluid, if there's seven billion people, there's seven billion sexualities, and the feelings are universal yet teens are often told the feelings are wrong, to deny them, that they are going to hell because of them.

The sad part is that as I watched a play written in 1891 the Puritanism it expressed, the repression, the denial of things like incest, homosexuality and such remain in full force today.

For instance, prior going to the theatre I did my syndicated radio show. On it, I spoke about the app "Confessions" an app for the iPad / iPhone approved by the Catholic Church to digitally allow one to confess. I could write 2000 words about that alone, and may, and spent an hour going through it on air. But the point is the questions. The app does a Spiritual Examination, a checkbox quiz for each commandment. These are samples: "Have I encouraged anyone to have an abortion?"; "Did I give scandal to anyone, thereby leading them in to sin?"; "Have I mutilated myself through any form of sterilization?"; "Have I encouraged or condoned sterilization?"; "Have I engaged in sex outside of marriage?"; "Have I been guilty of masturbation?"; "Have I sought to control my thoughts?" "Have I been Guilty of any Homosexual Activity?"; "Am I careful to dress modestly?"

Gay teens are still killing themselves in record numbers. In fact, the Los Angeles cast of "Spring Awakening" did a benefit for the Trevor Project at M Bar the night after the opening (Feb. 9, 2011). The Trevor Project is to help GLBT teens not kill themselves. Teens are still getting pregnant because they don't know about safe sex and many parents are leaving it the schools or society to teach their kids the do's and don'ts. Abstinence is still taught and condoned, promise rings worn, on and on and on. And yet behind the scenes, we see each day the reality of sex and kids. They're having it. People are having it with them. Some people that shouldn't. Some are gay, straight and every shade in between. And they make mistakes. And some don't make it through.

"Spring Awakening" pulls back a curtain on issues we'd rather not see, but ones we have all encountered. It's a reminder through song and stage that growing up is tough, and figuring out who you love, when and why is tougher (and an evolving question for life). The cast is spectacular, young, exciting, incredible voices, full of hope and promise much like the characters they play. They filled the Pantages with laughs and moments a little risqué for some. But was it the "blueness" of it, or was it the fact that the sentiment was touching on a past journey of their own? Because everyone in the theatre, cast member and audience alike, has lived through something as a teen portrayed on the stage.

It's only in Los Angeles for a short time, February 8 through 13 but then moves on to Denver February 15-16, Albuquerque February 18-19 and Bloomington Indiana February 22. For more info go to BroadwayLA.com

To hear more of the Karel Show go to http://www.thekarelshow.com