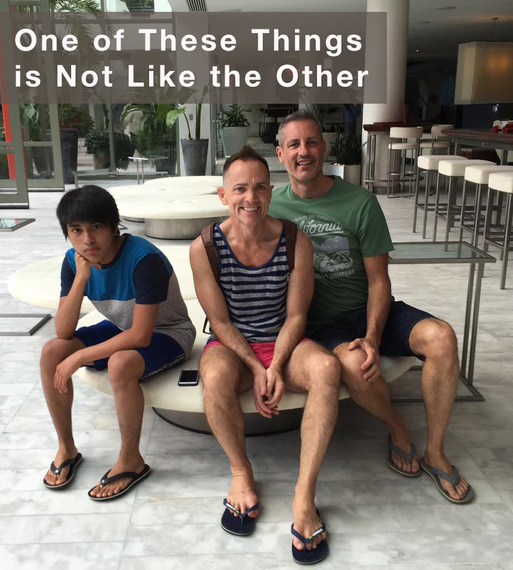 Last November, Ken and I celebrated our twenty-fifth anniversary in San Juan, Puerto Rico. Alone. Which, for the two of us, is pretty rare. Other than that trip, it's hard for me to think of a time when we were a duo instead of a trio. We stayed right on Condado Beach and it was just perfect. And while our son Jackson wasn't physically with us, he was definitely in our thoughts. The entire time we were there we kept saying Jackson would love this or Jackson would love that. Even before that visit was over, we knew we had to come back and bring Jackson.

When we started thinking about where we might go for Spring Break this year Jackson's only request was that we go somewhere warm. So we thought--let's head back to San Juan. It's warm! Ken and I had loved it and we just knew that Jackson was going to love it.

That's not exactly true. There were things that we thought Jackson would love and he did. He loved hiking through the rainforest, kayaking in the bioluminescence bay and bodysurfing the massive waves on Condado Beach. But through it all, Ken and I couldn't help thinking that our return visit just wasn't as enjoyable as our first trip. Maybe that's because there's nothing like some uninterrupted time with your teenager to push you right to up to the edge of a nervous breakdown.

Or maybe it was the fact that Jackson's phone only left his hand when he was physically submerged in water? Or maybe it was the endless stream of South Park, Family Guy and American Dad on said phone? Or was it the refusing to smile for a single picture? Or the I'll stay in the room while you two go get ice cream attitude? Ice cream! Whatever it was, by the time we were on our way to the airport Wednesday morning things were tense.

On Thursday we picked up one of Jackson's friends and headed to the mountains. Rinse and repeat. Times two. By the time we got home Sunday evening we had spent eight days together and we were actually looking forward to going back to work and school. On Monday Ken called me at the office to say something had to be done. In order to head off disaster, I did the only thing I could think to do: I called a family meeting.

As a working parent there's nothing less appealing than adding another meeting to my calendar. I have meetings at work to talk about future meetings. I'm sure a lot of you feel my pain, and may find the following statement hard to believe. Our family meetings are awesome. In fact, I wish my work meetings were as productive. Here are our ground rules.

By formalizing our time together, it forced Ken and me to really think about what it is that was bugging us and Jackson time to offer up a defense or acknowledge the problem. It turns out that we had allowed ourselves to get worked up over three key issues. We explained them to Jackson and he offered suggestions on how he could work on each of them. Jackson also got a chance to talk about what was bothering him. One of the things he mentioned was a lack of privacy. In the interest of respecting the process, I will honor his request for privacy by not repeating each of the issues and the compromises we all agreed to make. But I will let you know that last night Jackson flashed me a thumbs up and said he had gone three days without breaking his agreement and that he thought that might be a new record. I smiled at him and asked if we could make it four. He nodded and disappeared into his bedroom.

Our family meeting made one thing very clear to us; the Jackson we had imagined taking to San Juan with us doesn't exist anymore. He's been replaced by this sometimes moody, sometimes mysterious young man who is trying to find his place in the world. And that means apart from his parents. That's probably as it should be, but it doesn't make letting go any easier. I miss the days when his smile came a lot quicker. I'm hoping that if we continue to talk together as a family we will find our way back to the easy camaraderie we used to share. But between now and then we've still got four years of high school. Maybe I should set up a recurring meeting.

More:
Parenting ParentsPuerto Ricogay dadslgbt
Newsletter Sign Up
Raise the kind of person you'd like to know
Subscribe to our parenting newsletter.
Successfully Subscribed!
Realness delivered to your inbox