“I interviewed Matt [the day of the show] who said he didn't even have time to rehearse,” "Entertainment Tonight" correspondent Christina McLarty tells The Huffington Post. “Celebrities were joining in last-minute and Matt personally called [singer] Jon Bon Jovi to get him on board. They took over "Dr. Oz's" studio and backstage. While I was there, they were last-minute setting up green rooms for Christina Aguilera, Billy Joel and Sting.”

Lauer evacuated his family from their home in the Hamptons before the storm hit, but wanted to do whatever he could to help make a difference for those who were not as fortunate.

“No one asked him to do this. This was his idea,” one NBC insider tells me. “Yet, he would be the last person to take any credit.”

Backstage at the show, New Jersey Gov. Chris Christie could be seen shaking hands with rock legend Bruce Springsteen, who looked less enthusiastic about the meeting. Actor Danny DeVito was seen taking pictures in the small studio audience of family and friends. NBC Nightly News anchor Brian Williams was spotted munching on miniature cupcakes, while rocker Sting's wife, Trudie Styler, was sitting listening to her husband set the tone for the evening with his song "Message in a Bottle.”

"I'm so humbled by the talent and compassion of the artists who gave their time to this project. I just hope the generosity shown by viewers continues in the coming weeks and months,” Lauer tells The Huffington Post. 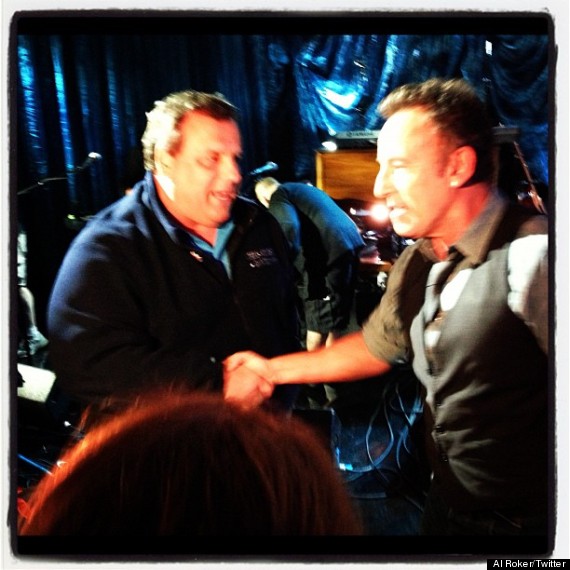