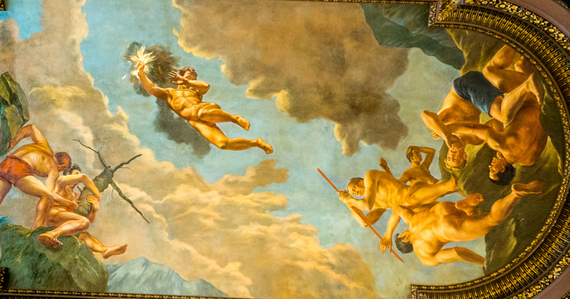 "Don't be stupid, be a smarty, come and join the Nazi party!"
--Mel Brooks, Springtime for Hitler

When I applied to graduate schools in the late 1970s, I was interviewed at one institution by a dignified Southern gentleman who happened also to be the school's founder. His name was Nevitt Sanford, and the program in psychology he created was named, with a touch of irony, the Wright Institute. Sanford had gained prominence as the coauthor of The Authoritarian Personality, originally a research project sponsored by the American Jewish Committee in the aftermath of the Holocaust. The organization sought to engage social scientists in helping to develop rigorous methods for the study of prejudice and hatred. And that is exactly what they did.

Sanford, deeply influenced by what he learned during his years of research, was tested immediately by a new form of prejudice sweeping the American collective psyche. In 1950, the same year The Authoritarian Personality was published, he became one of 12 professors at the University of California's Berkeley campus who refused to sign a loyalty oath during the McCarthy era of communist witch hunts. For his courage, he was dismissed by the university, but in 1959 he was reinstated by a Supreme Court ruling.

In 1968, he founded the graduate school where I was applying and later accepted. I had been drawn by the school's declaration that graduate education should be informed by a multidisciplinary approach, humanistic, and ethically responsive to the social conditions of its time. He told me that his vision was to create "clinicians for society," a role that did not yet exist. I think this is what defines certain kinds of visionaries. They see productive responses to social dilemmas long before others even perceive the need.

As Daniel Goleman noted in a New York Times obituary following his death in 1995, "Dr. Sanford was among the first to study the interaction between social systems and personality. He wrote about how social conditions could encourage people with dogmatic biases to persecute groups they were prejudiced against." His seminal work on authoritarianism became, in the words of social psychologist Dr. Susan Fiske, "a main taproot of all the later research on prejudice, as well as the field of social psychology."

It's now over sixty-five years since The Authoritarian Personality was first published. And the academic world has not been kind to this taproot of seminal ideas. Denigrated for its methodology, dismissed for its conceptual underpinnings in psychoanalysis, and relegated to the margins of social science for its hypothesis of an authoritarian personality linked with European fascism, the research fell into disfavor.

Now, in the midst of a political storm that few saw coming, the conceptual relevance of authoritarianism is greater than ever. Fortunately, novel approaches by social scientists have brought new perspectives to a redrawn authoritarian disposition, a quality no longer associated with a fixed personality structure. Rather, authoritarianism appears to ebb and flow with the perception of threat and, as Sanford hypothesized, is associated with the experience of social disruption.

Donald Trump's candidacy, and the heightened attention it has brought, sheds light on a nascent authoritarian movement, uniquely American. And it is growing inside the bowels of the Republican party--large enough to be a political party of its own. A Vox poll estimated that more than 55 percent of members of the Grand Old Party (GOP) score "high or very high" on an authoritarian scale. Far less worked up about traditional conservative issues, such as limited government and free trade, this group takes its animus from perceptions of threat--the most visible being outsiders, such as terrorists and immigrants, but also internal threats to social order and established hierarchies, such as the growing acceptance of same-sex couples and the increased influence of women and minorities.

The discomfort felt among the established Republican elite is palpable. They are witnessing a political experiment that has gotten out of hand. Having positioned themselves as a law-and-order party, a home for the silent majority, and a promoter of American exceptionalism, they cobbled together voters with a predilection for authoritarian views. Now, the alliances they helped create are turning on them as not being extreme or strong enough. Lurching between Trump and a similarly disliked candidate, Ted Cruz, Republican Sen. Lindsey Graham described the dilemma as a choice between "being shot in the head or poisoned." Asked the difference, Graham explained, "Donald is like being shot in the head; you might find an antidote to poison."

Of course, it is not just Republicans who are upset but any of us who find the incendiary rhetoric repugnant. Vox journalist Amanda Taub, fascinated with the phenomena of an authoritarian political movement, summarized a key finding from her investigation into the subject. "People who score high in authoritarianism, when they feel threatened, look for strong leaders who promise to take whatever action necessary to protect them from outsiders..." The Vox poll concluded that authoritarianism "was the best single predictor of support for Trump."

Trump instinctively understands the connection between his audience and the desire for protection against outsiders. Referencing his remarks about building a wall on the U.S.-Mexico border, he told the New York Times: "You know, if it gets a little boring, if I see people starting to sort of, maybe thinking about leaving, I can sort of tell the audience, I just say, 'We will build the wall!' and they go nuts." He also seems to embody the black-and-white terms in which authoritarian-minded individuals think. Trump gained prominence early on in the nominating process by declaring the need to deport 11 million undocumented immigrants with the proposition that "we either have a country, or we don't have a country." The either/or framework is consistent with an authoritarian hatred for ambiguity and an underlying fear that if selected rules are not followed, an existential threat exists.

While the media focuses on the contradictions, bombast, and resilience of Donald Trump's campaign, we must look beyond the personality and ask how such a figure rises in prominence. It is tempting to discredit Trump as an exception, an extreme case, or a product of a flawed political process. However, there are deeper and more uncomfortable questions related to the rise of authoritarianism. What latent urge for prejudice still lurks in our collective psyche? How might a Trump or even a Cruz candidacy be prologue to a new chapter in collective madness?

Mel Brooks got it partially right with his satirical insight that there is an alluring tug (be a smarty) to join a party, or even a mob, but that is not the whole story. Nor is the notion of a simple authoritarian personality, a person generally submissive to any authority. We must discover a more sophisticated link that, even while revealing the darker shades of our collective behavior, illuminates what is unfolding. We are talking about a growing movement, likely in the tens of millions, willing to support military force over diplomacy, alter the Constitution to bar citizenship for children of undocumented immigrants, and target Muslims and others of Middle Eastern descent for continuous police surveillance.

What is important to know, albeit disturbing, is that the authoritarian disposition is a psychological potential in each of us. In fact, the research on authoritarianism clearly suggests that under high conditions of threat, the majority of us will act in ways that "mirror the behavior and opinions of authoritarians..." (Hetherington and Weiler). In other words, this is not about us (nonauthoritarian) and them (authoritarian), but all of us and our collective response to fear.

And so I return to Sanford's vision of clinicians for society. To me this is about showing up with curiosity and courage, a commitment to genuinely understand what tears at the fabric of our social bonds. It is also, however, a rejection of attempts to amplify the danger from external threats or create internal scapegoats. Being a clinician for society is a declaration of power to act constructively and even therapeutically. Maya Angelou put it poetically when she said, "We are all at once both a composition and a composer. We have the ability not only to compose the future of our own lives, but to help compose the future of everyone around us and the communities in which we live."

The invitation is to create healthy environments, be they in educational settings, health care, workplaces, or our own family constellations. Each of us in our own way can support social justice, create beauty, and contribute to an ecology of kindness. However, we cannot do this blindly or with our heads in the sand. We must appreciate that there are many others, some of whom are friends and relatives, who see the world through a glass darkly. They are willing to support extreme positions and are looking for a strong leader who will protect them. They may not see what Mel Brooks captured so comically and tragically in his parody of an authoritarian leader, a temporary spring for some, winter for the rest of us. If there is a clue to the authoritarian disposition, it is that the need for an internal sense of order is more crucial than authority itself. We are dealing with responses to fear as much as any particular prejudice. Let us recall that when fear arises, there is also an opportunity to act with courage, understanding, and love.