Sprint is planning to make an announcement at its " Making the Impossible Possible" event in New York City Monday evening. "Illusionist" David Blaine will be there--but what news is the company planning to share?

According to the Wall Street Journal, Sprint will be taking the wraps off of a new smartphone: the dual-screen Echo from Kyocera Corp.

Sprint Nextel Corp. plans to unveil a smartphone late Monday that includes a twin set of touch screens that give the device a pseudo-tablet design, according to a person familiar with the device.

The device, called the Echo and made by the U.S. unit of Japan-based Kyocera Corp., features two 3.5-inch touch screens that can be stacked side by side.

CNET adds, "The dual displays can be placed side by side (perhaps something similar to the Acer Iconia) to allow you to work on two tasks at once or drag an item from one screen to the other. The handset is also said to feature a pivot hinge, so you can tuck one screen under the other and use it like a traditional touch-sceen smartphone."

Sprint announced earlier this year that it would be boosting its fees, charging an extra $10 a month for data fees starting January 30. Sprint will also be offering BlackBerry's PlayBook tablet later this year.

See Sprint's invitation to its announcement below. 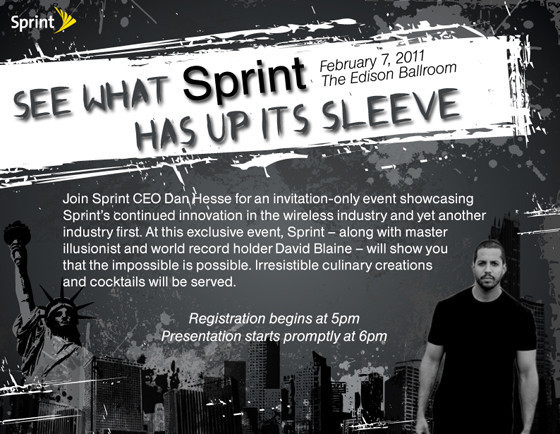