Next time you're fighting with your best friend over whether Minority Report or Blade Runner is the best Philip K. Dick movie adaptation, why not turn the judging over to a third party: the Internet.

Squabbler, a new site where two users can record 30-second arguments against each other, lets the web decide who's right. Now maybe you won't have to spend your Friday night fighting over whether or not you should salt the water for the beans.

What it is: Squabbler is a platform for settling disagreements the new-fashioned way. Squabble topics (or Squabblegories, as they're called) range from politics, to pets, to Facebook etiquette. Basically, anything that you might get into an argument over with your friends, co-workers and lovers that you want to get settled with a satisfying percentage point breakdown is fair game.

Mike Bender, co-founder of Squabbler, as well as the force behind popular photoblog Awkward Family Photos, attributes the birth of the site to his relationship with co-founder Matt Bijur. "He and I went to college together and we have always had these little squabbles and disagreements about everything, so there was always this feeling of, 'I wish someone else was there to tell the other person they were wrong.' Thats sort of where the idea was born."

Bender hopes that Squabbler can be not only "a place where people can debate about anything and everything from social issues to whether an air conditioner can get you sick or not" but "a debate platform that powers the web."

How it works: Setting up your Squabble is easy. Once you've found someone who disagrees with you (an arduous task, to be sure), you can submit your 30-seconds or less video to the site and the email address of the person you're Squabbling. That person will receive an email with a link to the challenger's video, and the chance to submit a video of his/her own.

When the Squabble is up on the site, the rest of the world can vote for the side they think wins. The score is tallied up automatically next to the videos, so Squabblers can see how they're doing. Users can also set a time limit for the length of time others can weigh in, choosing from no time limit, seven days, three days, or 24 hours.

The 30-second time limit is designed to keep it quick.

"We really wanted to keep the arguments concise, keep it fun, and keep it from it getting rambling and it getting boring," said Bender. "It forces you to really think out your arguments."

The site only launched six weeks ago, but the Squabbles have been rolling in. One woman, exasperated with her boyfriend's vocation as a Captain Morgan impersonator, asked the Internet to vote on whether his dress-up counted as a real job. He countered. He lost.

Another Squabble involved two sisters, one of whom believes the other's cat is actually a squirrel. And one of the most popular Squabbles on the site features Bender's grandparents (also prominently featured on Awkward Family Photos) arguing over his grandfather's right to eat popcorn.

Why you'd use it: Admit it: when you're arguing with someone else, you'd really just like to prove to them they're wrong. Now you can, or at least, prove that most other people think they're wrong.

But Bender's hopes for Squabble are more ambitious than just settling cantankerous disputes.

"Our dream is that the Squabbler platform is being used on ESPN.com, CNN.com, that basically the Squabbler play module could be embedded across the web," he said. "You could also have a situation where CNN is dynamically pulling in Squabbles, so it's almost like a Twitter feed."

Squabble also extends its fingers into the world of creative branding. They are currently involved in a campaign with Virgin America, who have created a Squabble over two competing videos intended to eventually be shown in-flight. The person leaving the most creative comment will win a free flight. 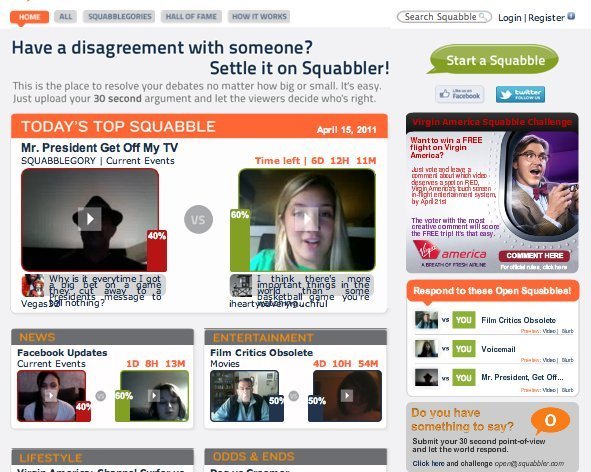 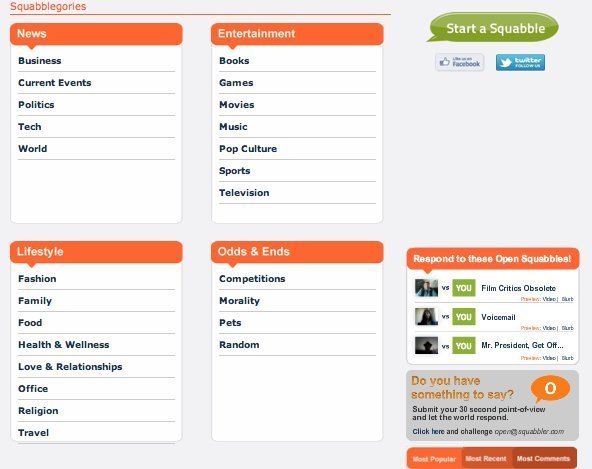 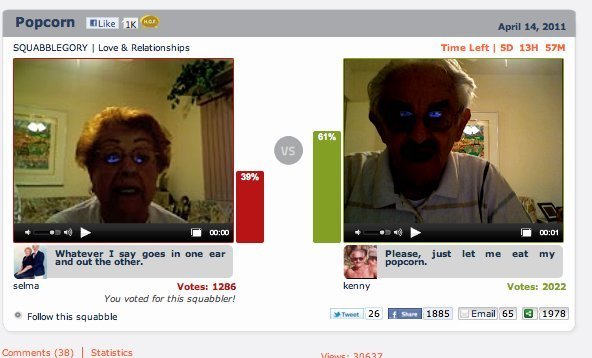 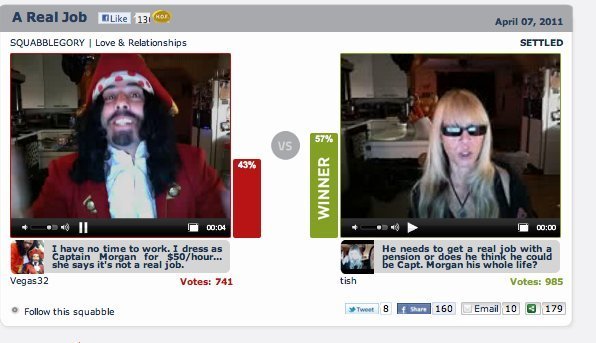