The Circle, the Square, and the System

After the promises I made about the dramatically improved performance attributes of Roundhouse Technology (RHT) in the first part of this series, and the magnitude of the global problem it stands to help solve in the second, I will now focus on how RHT does it.

RHT is the product of reason, not whim. Its genesis is in my life-long held premise that logic produces the most enduring qualities in all aspects of performance as well as in visual satisfaction.

In my opinion, the most significant milestones in the evolution of architecture were the appearance of the circle, and then the square.

The earliest structures built by all civilizations were round. And for good reason: Round structures require the least amount of material, and provide the greatest structural strength of any other form.

RHT unearthed the circle and integrated it with the rectangular geometry to create the best of both worlds -- an irreproachable technology for the benefit of creating superior buildings more efficiently: The circle as the 'container' -- the boundary of the building, its interface with the elements -- for efficiency, economy and harmony; the orthogonal grid as the organizing system for interior spaces, ease of fabrication and constructibility.

By fusing ancient wisdom with cutting-edge science, technology and pertinent materials, RHT represents the best of all worlds.

In my design of 101 California Street in San Francisco (as Chief of Design for Philip Johnson), I applied the same unique juxtaposition of orthogonal geometry -- which is the essential core of commercial office building/space design -- with the circular geometry that gave the building its unique urban form. This first-of-its-kind solution enabled the client to realize its unique goals, and resulted in the world's first round office tower. (More about it in future articles.)

While RHT enables multiple combinations producing many different building forms, for the first step in explaining some of RHT's performance improvements I'll analyze its basic geometry -- the square in the circle.

The Round Form -- the Ultimate in Performance
Exterior Wall vs. Interior Space

The building's roof and the exterior wall protect this indoor space from the elements.

The building's exterior wall surface area varies in size with the building form. It is the most expensive part of a building and the major cause for its energy waste.

The form that is inherently most efficient -- that provides the largest indoor area with the smallest exterior wall -- is the circle. (This supreme efficiency explains why it is the most prevalent form in nature.)

Therefore, a round building form is significantly more resource-efficient than any other building form, including the most environmentally sound homes built today.

It requires less material:
And, it reduces unwanted heat gain and loss.

One of these environmental homes -- which is an architecturally superb house -- was chosen to demonstrate the performance superiority of the Roundhouse.

Roundhouse vs. Platinum Rated House
Getting Much More for the Money 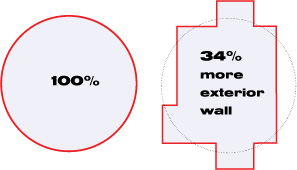 Both houses with the same 1,325 sf interior floor area

Both houses with the same 129 linear feet exterior wall

The LivingHomes house in Santa Monica, which was given the highest rating of Platinum by the US Green Building Council, has 34% more exterior wall area than the Roundhouse of the same total interior floor area -- which translates to 34% more in material used, in greenhouse gas emissions, etc.

Conversely, a house in the form of LivingHomes house with the same exterior wall area as the Roundhouse, will yield only 55% of interior floor area compared to the Roundhouse -- which translates to almost the same amount of energy, and greenhouse gas emissions, etc. for half of the living space in the Roundhouse.

The Central Service Core
The Square in the Circle 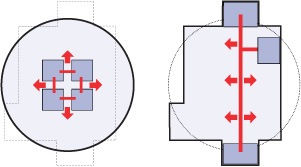 Roundhouse Does Not Have Round Rooms!
It Means Conventional, Rectangular Rooms With the Added Value of Universally Desired Panoramic Bay Windows

Roundhouse vs. conventional house of the same area and floor plan

Room layouts in the Roundhouse can be identical to conventional layout in the orthogonal building, with the very valuable addition in the Roundhouse of panoramic view in all living, sleeping, and eating spaces, and with most of these rooms larger as well.

The Ultimate in User Flexibility
But It Doesn't Have to Have Conventional Rooms...

Because the interior walls outside the core do not provide any load bearing (structural support) or service function (water, electricity, or climate control), room layouts in the Roundhouse can be endlessly customized -- including the capacity for wide open spaces -- to satisfy any changing need, with construction greatly simplified. Compared to any conventional home in which most partitions cannot be changed. Ever.

The use of a central service core for providing the lateral stiffness that is required to resist earthquakes as well as hurricanes, takes lessons from tall commercial buildings and makes these solutions integral parts of RHT. This solution is by far more effective when applied to the RHT's round form, making it the most effective among all other forms, reducing the cost of providing immunity to these natural forces. 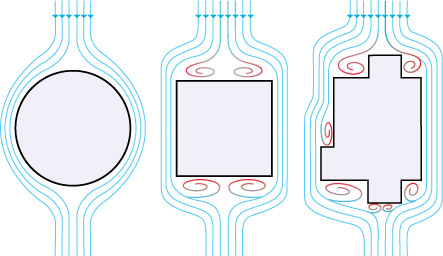 In addition to the use of a central service core for providing the lateral stiffness for resisting hurricanes (see above), the superior aerodynamic behavior of the Roundhouse reduces the wind pressure load acting on the building to its minimum -- less than half (!) that of a square building (center) and much less than irregular building forms (right), making the RHT's round form the most effective, least expensive to withstand high winds.

The Roundhouse captures all breezes from all directions. And, even when there are no breezes, the Roundhouse ensures an even and constant natural ventilation throughout the house.

I applied the same unique ventilation system in my design of the Crystal Cathedral in Orange County (as Chief of Design for Philip Johnson), an all-glass building, which functions perfectly in Southern California desert for thirty years without air condition (!). (More about it in future articles.)

The Roundhouse Gets Maximum Daylighting And Solar Energy All Day Long

The Roundhouse maintains even, optimal exposure to solar light and energy throughout the day.

At all times, over the course of the day, the sun's rays are perpendicular to the Roundhouse exterior wall, enabling full benefit from the sun's light and energy.

Orthogonal buildings, on the other hand, can enjoy full benefit from the sun's light and energy only on the three instances when its walls are perpendicular to the sun's rays.

The integration of circular & rectangular geometries, described above, combined with automated fabrication that RHT affords, enable breakthrough efficiency in buildings' production while preserving -- even enhancing -- their uniqueness, the prerequisite for viable neighborhoods and cities.

The RHT system will be the subject of my next article.