Over 320 people were killed and 500 wounded in suicide bombings this week at three churches and three luxury hotels, the country’s deadliest attack since its decadeslong civil war ended in 2009. The bombers targeted two Roman Catholic churches ― St. Anthony’s Shrine in Colombo and St. Sebastian’s Church in Negombo ― and one evangelical church ― the Protestant Zion Church in Batticaloa.

The bombings occurred on Easter, the day that Christians believe Jesus Christ was resurrected. It is one of the most sacred dates on the Christian calendar.

Sudesh Kolonne told Australian Broadcasting Corp. that his wife and only child died in a bomb blast at St. Sebastian’s.

“I don’t know what to do,” he said. “We used to go to that church every Sunday. We never expected this.”

Nilantha Lakmal, another survivor of the bombing at St. Sebastian’s, told The Associated Press that all eight of his relatives escaped the attack unharmed, including his three young daughters. Still, Lakmal said he doubted if he’d ever return to the church.

About 40 people have been arrested for suspected links to the bombings, the AP reports. Sri Lankan authorities have pinned the attack on the National Towheed Jamaar, a local Islamic extremist group. The Islamic State terror group has also claimed responsibility, although it has not offered proof of its involvement and has made unsubstantiated claims in the past.

Nationalist sentiment across South and Southeast Asia, like other parts of the globe, has led to acts of hate against religious minorities in recent years. Just one week ago, on Palm Sunday, a group of Sri Lankan Sinhalese Buddhists attacked a Methodist building in Anuradhapura with stones and firecrackers, trapping worshippers inside, The New York Times reports.

Sri Lanka has also recently witnessed an uptick in anti-Muslim sentiment. Last year, Sinhalese people destroyed Muslim-owned properties in the city of Kandy, triggered by reports that Muslim men had killed a Buddhist truck driver after a traffic dispute, according to Reuters.

Sri Lanka’s Christians have tried to avoid taking sides in the country’s bitter religious and ethnic rivalries, according to the AP. The country is still recovering from the civil war between its Sinhalese majority, which is largely Buddhist, and ethnic Tamils, who are mostly Hindu.

Although Christians are currently a minority, Christianity has a long history in the island nation ― one that is intricately tied to the legacy of colonialism.

Catholics are the largest Christian group, making up about 6% of the population, the AP reports. Sri Lankans first began converting to Christianity en masse after the Portuguese colonized the island in the 16th century ― although small groups of Christians are believed to have existed in Sri Lanka before then. Various Catholic religious orders established centers throughout the island, and the faith attracted many new followers, including Don Juan Dharmapala of Kotte, king of a small kingdom near modern-day Colombo.

The Netherlands gained control of the island in the middle of the 17th century. Dutch forces sought to promote Protestantism, specifically Calvinist theology. Catholicism was declared illegal, which meant Catholics had to worship in secret. It was during this period that Joseph Vaz, a missionary from Goa, then ruled by the Portuguese, arrived in Sri Lanka. The missionary spent 23 years ministering to Catholics in Sri Lanka, sometimes using disguises to escape persecution by the Dutch.

Nationalist movements in the 19th and 20th centuries sought to revive the prominence of Buddhism and diminish Christianity’s influence.

Today, Christians only make up about 7% of Sri Lanka’s population, amounting to about 1 million people, according to the BBC. Most of the country is Buddhist (70%), while significant numbers are also Hindu (13%) or Muslim (10%).

Pope Francis visited Sri Lanka in 2015, presiding over a Mass in Colombo attended by thousands of Catholics and people of other faiths. During the trip, he canonized Vaz as Sri Lanka’s first saint.

On Monday, Francis led thousands of pilgrims at the Vatican in prayer for Sri Lanka.

“I pray for the numerous victims and injured and I ask everyone not to hesitate to offer this dear nation all the necessary help,” he said, according to Catholic News Service. “I also hope that everyone will condemn these terrorist acts, inhuman acts, that are never justifiable.”

The most deadly of Sunday’s bombings occurred at St. Sebastian’s. At least 110 people perished at the church, a Catholic official, Cardinal Malcolm Ranjith, told the AP.

Negombo is a seaside fishing town that lies some 20 miles north of Colombo. The town has earned the nickname “Little Rome” because of its many churches and small roadside Catholic shrines. About 65% of Negombo is Catholic, the AP reports.

St. Sebastian’s Church was built in Gothic style in the 1940s and was modeled after the Reims Cathedral in France.

On Tuesday, Ranjith presided over a funeral service at the church that was guarded by hundreds of military and police troops. 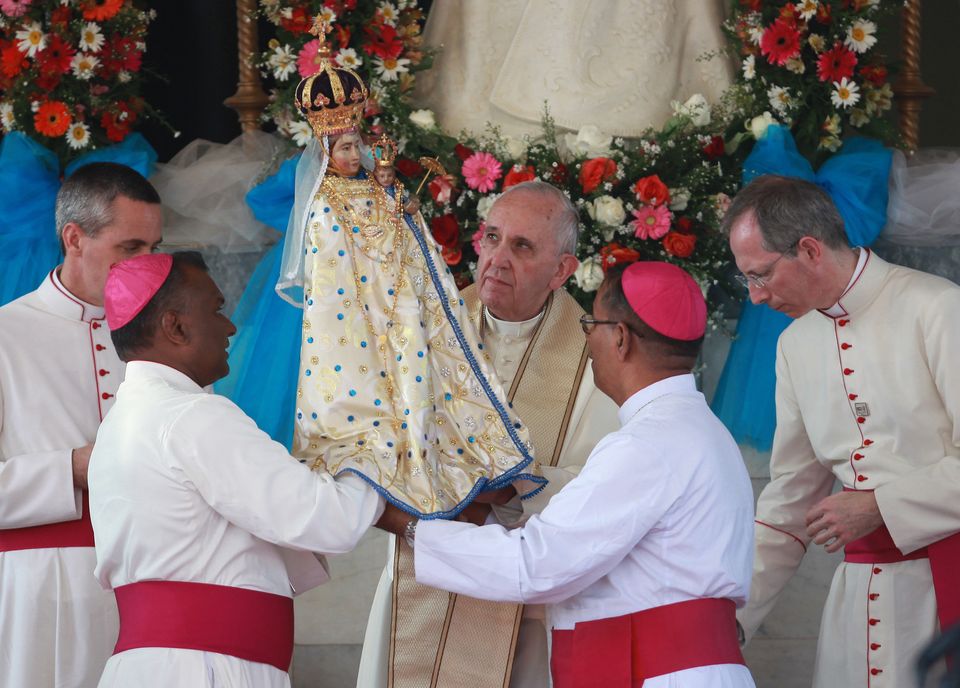