In the light of triumph the mistakes of the past are often thrown in to the shadows to be forgotten. For Sri Lanka this bodes true, as the government continues to bathe in the "glory" of its defeat of the LTTE back in 2009.

Four years have passed since Sri Lanka's brutal and bloody civil war came to an aggressive end. At the time many rejoiced with the news, and expectations that after 26 years the country could reconcile. It now appears as though reconciliation is playing second fiddle to the growing political intrigue on all sides.

As pressure from both the international community and the civil society in Sri Lanka grows on the government, members of the ruling coalition continue their attempts at winning back support and suppressing opposition. Unfortunately, these political tactics have encroached on the rebuilding process of the country, leaving many questioning the politicians and their commitment to reconciliation.

On May 18 this year Sri Lanka celebrated its "Victory Day," which marked the anniversary of the end of the 26 year conflict with the LTTE. While this day, to many, would seem the perfect opportunity to remember all those who died in the civil war, the government used this as the stage to pay tribute to the armed forces and demonstrate their "military might."

A military parade along Colombo's iconic Galle Road marked this occasion, before a quieter and more sombre vigil was held at a war memorial erected opposite the Parliament. While remembering the sacrifices made by those in the armed forces during the conflict is necessary, it has now come at the expense of reconciliation. 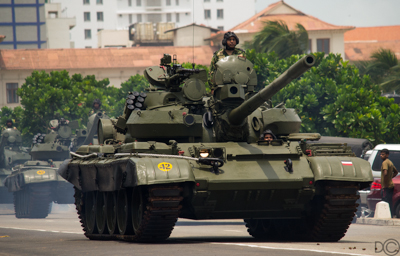 The conflict not only exacted a heavy toll on the tri-forces, it also cost countless civilian lives all over the country. The near three-decade civil war saw Sinhalese, Tamils, Muslims and Burghers from all over the island lose their lives in the fighting. Sadly, there was little or no effort made by the regime to remember the thousands of civilians who died. In fact the very name "Victory Day" has drawn heavy criticism, with many calling on the government to rename it something more in line with the theme of remembrance.

The regime has instead used this platform to reignite their support amongst the armed forces by celebrating their contribution to the country. Furthermore, in a show of strength, the government was able to remind those they feared would oppose them that they had a military strength of 400,000 behind them. 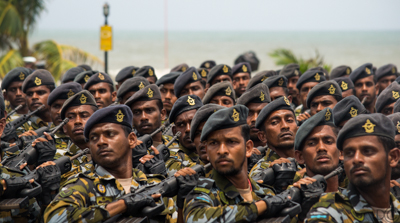 Soldiers on display during the Victory Day parade

Away from the parades and demonstrations of support, the government continues to battle with minority parties over the much-debated devolution of power. In this regard, it appears that all parties involved have reached a stalemate, with neither side willing to compromise. The highly controversial 13th Amendment to the constitution, which in theory would see a greater devolution of power to the minority run regions of the country, is facing the potential alterations that will see it highly ineffectual.

Once more the government is tipped to use its majority in Parliament to pass through a bill that would appease the nationalists while failing to take in to account the desires of the minorities. It was, in fact, the lack of representation that contributed initially to Sri Lanka's civil war. An amendment that now threatens to marginalize the voices of the minorities will only serve to further widen the cracks that already exist in this society.

The rise of the Bodu Bala Sena, a Buddhist nationalist group dedicated to exerting the dominance of the Sinhala Buddhist majority over the populace, has placed the spotlight on the government who is supposedly dedicated to rebuilding the nation. However, they have instead chosen to turn a blind eye to the growing racial sentiment, choosing instead to punish those who voice opposition to such groups.

While the government appears uninterested in tackling such issues, the main opposition parties in the country have also failed to effectively tackle the plight facing the minorities. The main political voice for the Tamil people, the Tamil National Alliance (TNA), has chosen to battle the government on foreign soil hoping to increase the international pressure. This move has resulted in the government successfully isolating them, accusing them of relying on foreign intervention. Unfortunately, the TNA have failed to gather support outside of the Tamil voter base. This has left them open to accusations from supporters of reconciliation that they too are engrossed in the political battles, forgetting the real issues faced by the populace.

As Sri Lanka struggles to overcome the scars left behind by the civil war, the politicians are failing to tackle the issues that continue to threaten the hard-earned peace. The political intrigue and the apparent disinterest have left the country facing the very real prospect of slipping back in to a society divided on ethnic lines.

Media Secretary to the Minister of Public Enterprise Development