What can meditation do to help a war-torn nation heal?

This is a question spiritual teacher Sri Sri Ravi Shankar has been asking for decades and one that has be a primary concern of his since war broke out in Iraq in 2003. Shankar's spiritual community, The Art of Living Foundation, first started doing work in the country that year when volunteers traveled to Iraq to run medical camps and teach meditation classes.

That work continues today but has taken on greater immediacy in recent months as the Islamic State unleashed a rein of terror on Christians, Yazidis, women, journalists and any who came in their way.

Of particular concern to Shankar and The Art of Living is the plight of the Yazidis in Iraq, an ethnic and religious minority with ancient roots which has been systematically persecuted by the Islamic State and by al Qaeda before them. Shankar said in a press statement:

“This is the one of the worst genocides of the 21st century. Yazidis are an ancient community on the verge of extinction. Several members of this community visited me here in the United States and pleaded for help to rescue the people from the ISIS onslaught. Christians, Yazidis and Kurdish Shias are languishing in camps in Erbil, Duhok and Khazir. Yazidis who were a community of 23 million have now been reduced to 1 million over the years.”

Reports of the Islamic State's treatment of Yazidi women have been particularly harrowing and include stories of rape and sexual slavery. To address this dire situation, Shankar traveled to Erbil, Iraq on Nov. 19-21 to host a conference on Thursday in conjunction with the International Association for Human Values (IAHV), which he founded in 1997, and the Kurdistan Regional Government on "Protecting Women & Bringing Peace and Stability."

Joining him to speak at the conference is Dr. Yousif Muhammed, President of the Kurdistani, Mawahib Al-Shibani, director of IAHV, Bayan Nouri, Iraqi Minister of Women, members of the Iraqi Parliament and others. During his visit Shankar will also meet with Yazidis in refugee camps in Lalish, where the Yazidis' principal holy site is also located.

The Art of Living, which Shankar founded in 1981, has worked in conjunction with the IAHV in Iraq over the years to provide support in the form of medical treatment, vocational training and distribution of water, food and other basic needs.

Beyond these efforts, though, Shankar aims to bring Yazidis and other oppressed peoples in Iraq the tools of mindfulness, meditation and breathing techniques, which The Art of Living's website says can have a profound effect in treating stress and trauma brought on by violence. The organization outlines the strategy on its website:

Understanding the needs of this humanitarian crisis, Sri Sri’s Iraq peace initiative has a two-pronged mission: providing stress relief and disaster management techniques to overcome personal stress and helping people pick up their lives through service initiatives. [...] The Art of Living has proven that individual inner peace can be a powerful tool in resolving conflicts, and is spreading the message of peace and non-violence to Iraqis, through its specially tailored programs. 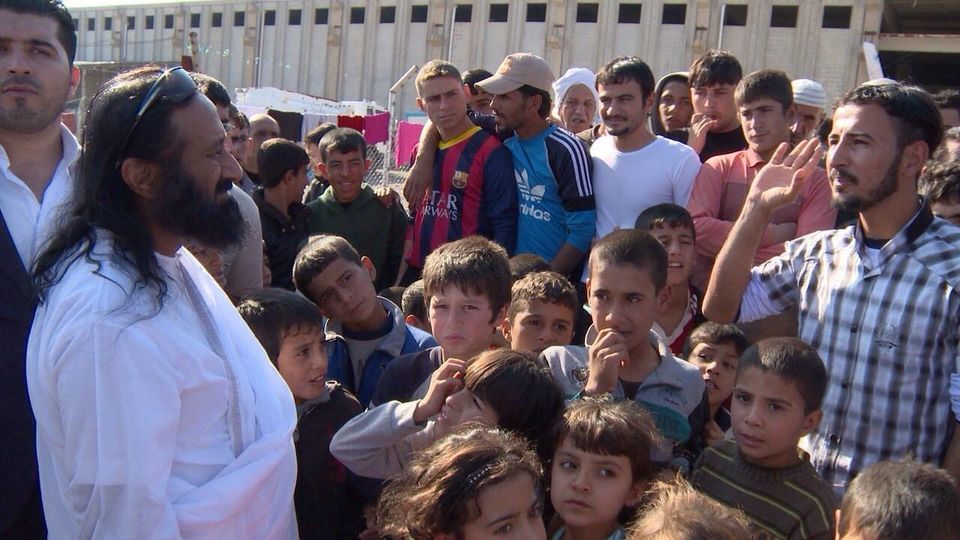