New rivals from condiment behemoths Heinz and Tabasco threaten to shake the so-called “red rooster” sauce from its perch as the leading brand of the chili pepper and garlic spread.

“I do fear Heinz and Tabasco because they are two very big and well-known companies,” David Tran, the company’s founder and chief executive, told The Huffington Post in an email Friday. “My company can lose market share and income if they are successful.”

Huy Fong’s unconventional marketing strategy over the last 35 years cultivated a cultish obsession among fans for whom the company became as synonymous with Sriracha-style sauce as Ziploc is for sealable plastic bags. Tran, a 70-year-old refugee who fled Vietnam in the 1970s, has never advertised the product. Still, by 2013, the company pulled in $60 million a year in sales, a number projected to grow by 20 percent annually.

The company remained mostly secretive for decades until last year, when residents living near its plant in Irwindale, California, complained that fumes emanating from the factory stung their eyes and made the neighborhood smell bad. A lawsuit by authorities in the Los Angeles suburb was dropped in May. In a move that earned him the title the “Willy Wonka of Sriracha,” Tran then opened the 650,000-square-foot facility for tours.

The incident only served to increase its popularity. And with that, its competition.

A Google Trends chart shows how searches for Sriracha spiked during the Irwindale controversy.

In May, Tabasco -- easily the leading U.S. brand of traditional hot sauce -- launched its own version of Sriracha, which is slightly darker and sweeter than Huy Fong’s. Heinz released its take on the Southeast Asian hot sauce on Monday.

Huy Fong tried to trademark the word “Sriracha,” but Tran said regulators declined because the name derived from Si Racha, a seaside town Thailand. Granting one company the right to use the name would be akin to granting one winery the rights to Champagne. Instead, Huy Fong trademarked the rooster logo that marks its bottles.

For now, sales at Huy Fong seem secure. But Tran worries that pressure from heated competition could force his company to abandon its premium chili growers in southern California in favor of cheaper imports.

“I use local produce, like California-grown chili peppers and garlic, which is more expensive for me,” Tran said. “Maybe these big companies import their Sriracha ingredients, so production costs are less than ours. Their profits may be more so they have an advantage.” 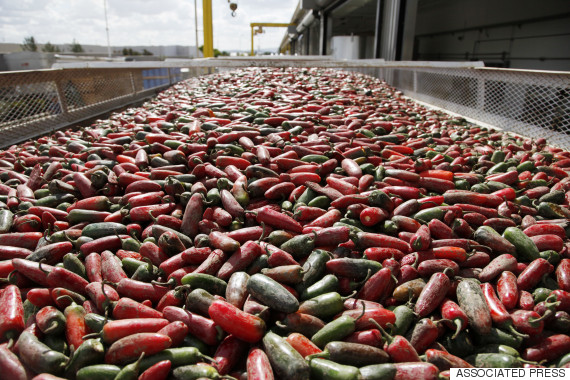 A fact sheet provided by a Heinz spokeswoman did not name the source of its peppers. Tabasco did not respond to a request for comment.

Still, Tran vowed to eat the cost of any financial pressures for as long as possible.

“The consumers don’t mind where the Sriracha ingredients are coming from and that may affect our local economy if we need to downsize and cut jobs,” Tran said. “We will not let these companies influence how we produce our products and will continue to make them until we can no longer absorb the rising costs of supplies due to lower demand of our products.”