No one wants to be known as a "fly-over" city. St. Louis, nestled in the Midwest about three hundred miles from its more popular cousin, Chicago, has long had that unfortunate designation, along with a spot on lists such as "America's Saddest Cities" and "Most Dangerous U.S. Cities."

But there's the case to be made for "St. Louie," as it's affectionately called, as America's most hidden gem. The city is not only a vibrant cultural destination boasting a wide array of museums, music and theatre venues and fine dining. What actually separates St. Louis is its emphasis on volunteerism, charity, the arts and overall access for its residents. After all, how can you not like a city where so much is free?

Here are 26 reasons the "Gateway to the West" is a hidden American gem.

1. It's one of the most charitable cities in America.

The 'Lou puts its (charitable) money where its mouth is. The city is consistently ranked as one of the most charitable cities in the country, having ranked ninth last year (and ahead of Chicago, to boot!). What makes St. Louis a true gem is its eagerness to give.

2. It treats access to the arts as a public right, not an exclusive privilege.

St. Louis has placed emphasis on the arts and cultural institutions as a way to elevate society, as evidenced by the special property tax that subsidizes the Metropolitan Zoological Park and Museum District, which includes several of the city's world-class cultural institutions. As a result, most of them are free!

Offering nearly 1,293 acres of land for in-line skating, biking, walking, running, golf, tennis, and other sports and activities, Forest Park is the crown jewel of St. Louis. The park is home to five of the region's major institutions: the St. Louis Art Museum, the St. Louis Zoo, the St. Louis Science Center, the Missouri History Museum, and the Muny amphitheatre (more on all these later).

A study by the Corporation for National & Community Service ranked St. Louis eighth when it comes to volunteering. 730,000 people, or 32 percent of St. Louis area residents, donated 73 million hours of service. This adds up to more than $1.6 billion dollars!

5. The Missouri Botanical Garden is the oldest botanical garden in continuous operation in America.

The Missouri Botanical Garden is a National Historic Landmark and one of the oldest botanical gardens in the United States. "Botan," as it's called by locals, features 79 breathtaking acres of horticultural display from around the world. This includes a Japanese strolling garden, Henry Shaw's original 1850 estate home and a geodesic dome called the Climatron.

6. St. Louis has not one but two downtowns.

Yup. St. Louis has two downtowns, and Clayton is one of them. This is where you'll find the fancier dining, fine art galleries and boutiques as well as the more tony hotels in town like the Ritz Carlton and the Tudor-designed Seven Gables Inn.

7. It's also got a loud and proud "gayborhood."

With rainbow flags proudly waving along Manchester Avenue, it is hard to miss the epicenter of St. Louis' LGBT nightlife, The Grove. The area boasts a handful of hot spots including Just John, Meyer's Grove, Erney's 32 Degrees, Rehab, Attitudes and the always-supportive LGBT Center of St. Louis. Like in many progressive cities, it's not surprising that the trendiest areas are also some of the most LGBT-friendly.

8. There's nothing like being a Cardinals fan, especially in one of the best ballparks in the country.

Baseball in St. Louis is an unavoidable annual celebration, with an influx of red-clad fans -- drinking Schlafly beer, obviously -- invading the downtown area each season. Plus, Yelp, Bleacher Report and Fox Sports have all ranked Busch Stadium as one of the top ten in the country for the views of the city, the hospitality of its staff and for the ability to see the game both in the stadium and outside!

9. The city has beautiful residential architecture -- and it's affordable.

St. Louis residential architecture is top-notch but also affordable. Whether you're purchasing a starter home or a mansion, there is a classic, timeless look to St. Louis homes that rivals that of any other city.

10. The city's fanciful City Museum is like "Alice in Wonderland" come to life.

City Museum, designed by internationally acclaimed sculptor Bob Cassilly, is a 600,000 square-foot museum in the former International Shoe Company building. Put simply, the interactive museum is an eclectic, surrealistic playground for all ages.

11. The Arch is America's tallest monument.

At 630 feet, the Gateway Arch, or just "The Arch," is an architectural marvel that is more than twice as tall as the Statue of Liberty. The stainless-steel-faced landmark pays homage to Thomas Jefferson and St. Louis' position as the gateway to the West. An impressive view from the ground up, it is even more stunning to see the view from the top down.

12. It's a mecca for recent college grads.

If you're a recent graduate in search of a job, look no further. Forbes ranked St. Louis as the happiest city for job-seeking college grads in 2012, based on its high average salary.

13. It has the most beautiful fall foliage.

We know, we know, we know what you're going to say: Uh, New England. But just one stroll in the The Gardens, a jog in Forest Park, a bike ride down Katy Trail or a visit to The Arch, and you'll see St. Louis is one of the most picturesque places come fall.

14. The Cathedral Basilica doubles as the Mosaic Museum, containing one of the world's largest mosaic collections.

To say that St. Louis has a strong Catholic community is an understatement. So it's no surprise that the beautiful Cathedral Basilica is adorned with 83,000 square feet of detailed interior mosaics.

The Loop is an always-evolving neighborhood home to unique stores and boutiques and some of the most iconic restaurants in St. Louis. Here, you will find the famous Blueberry Hill (and must-have toasted ravioli) and the St. Louis Walk of Fame. It was also named one of the 10 greatest streets in America!

16. This midwestern town has one of the best art festivals in the country.

The Saint Louis Art Fair, which attracts more than 100,000 people each September, is regularly ranked one of the top festivals in the country.

Frozen custard of all sorts of flavors! #pumpkinpie!

18. It has pizza good enough for The White House.

St. Louis-style pizza typically has a very thin crust made without yeast, usually with Provel processed cheese, and cut into squares or rectangles instead of wedges. You can find a classic slice at Imo's. Also, worth mentioning is Pi's Pizzeria which prides itself on not using Provel in its pizzas. Pi's was so good, the president flew St. Louis restaurant Pi owner Chris Sommers to the nation's capital to make 20 pizzas for the Obamas and staff. Pi's is definitely a favorite, but maybe next time they'll order Imo's!

The St. Louis Zoo is one of the best in the country with over 90 acres and about 18,000 animals! Located in the heart of Forest Park, getting in will cost you nothing.

20. It also has one of the most significant art museums in the country -- and it's free, too.

The Saint Louis Art Museum has an encyclopedic collection of more than 33,000 works of art spanning five millennia and six continents. It added an East wing in the summer of 2013 which was, not surprisingly, mostly funded by private donors. And, yes, admission here is also free.

21. It's home to one of the best medical schools in the country.

Currently ranked as the sixth best medical school in the country by US News & World Report, Washington University School of Medicine in St. Louis has been ranked second two times (2003 and 2004) and has been on the top ten list since the rankings were first published.

22. It's "nerd central" for science- and history-loving residents.

The Science Center was ranked one of the top five best science centers in the country by MuseumPlanner, and it includes a museum and a planetarium. The history museum includes Louisiana Purchase Exposition artifacts and items relating to Charles Lindbergh and his trans-Atlantic flight in the "Spirit of St. Louis" (which, was funded by St. Louis businessmen, by the way). Oh, and they're both located in Forest Park and are both free, of course.

23. There are free seats available for every performance in St. Louis' outdoor 11,000-seat theater.

The Muny, short for The Municipal Theatre Association of St. Louis, is an outdoor musical amphitheatre located in Forest Park. About 1,500 seats in the last nine rows are available on a first come, first served basis for free -- for every single performance.

24. It boasts the second-oldest symphony orchestra in the country.

Second only to the New York Philharmonic, the St. Louis Symphony continues to be affirmed by the music world. The New York Times recently named its performance of Benjamin Britten’s Peter Grimes on the 100th anniversary of the composer’s birth one of the top five classical performances of 2013. The Symphony also recently donated a bassoon to a St. Louis-area school district.

The Saint Louis Brewery brews over fifty unique styles of fresh beer every year and makes some of them available on draft at their two brewery restaurants: The Schlafly Tap Room in downtown and the Schlafly Bottlework in the Maplewood neighborhood. On the weekends, the brewery provides free tours!

26. And if you still underestimate St. Louis, just take it from T.S. Eliot...

"It is self-evident that St. Louis affected me more deeply than any other environment has ever done. I feel that there is something in having passed one's childhood beside the big river, which is incommunicable to those people who have not. I consider myself fortunate to have been born here, rather than in Boston, or New York, or London."

CORRECTIONS:An earlier version of this story said that Novak's Bar was among the top bars in The Grove. While the bar was a popular destination, it closed last year. The new wing of the St. Louis Art Museum was also initially misidentified as the West building. Language has been updated to clarify that Pi pizza is not made with Provel cheese, whereas St. Louis-style pizza usually is; and to reflect the Cathedral Basilica is no longer the world's largest mosaic collection. 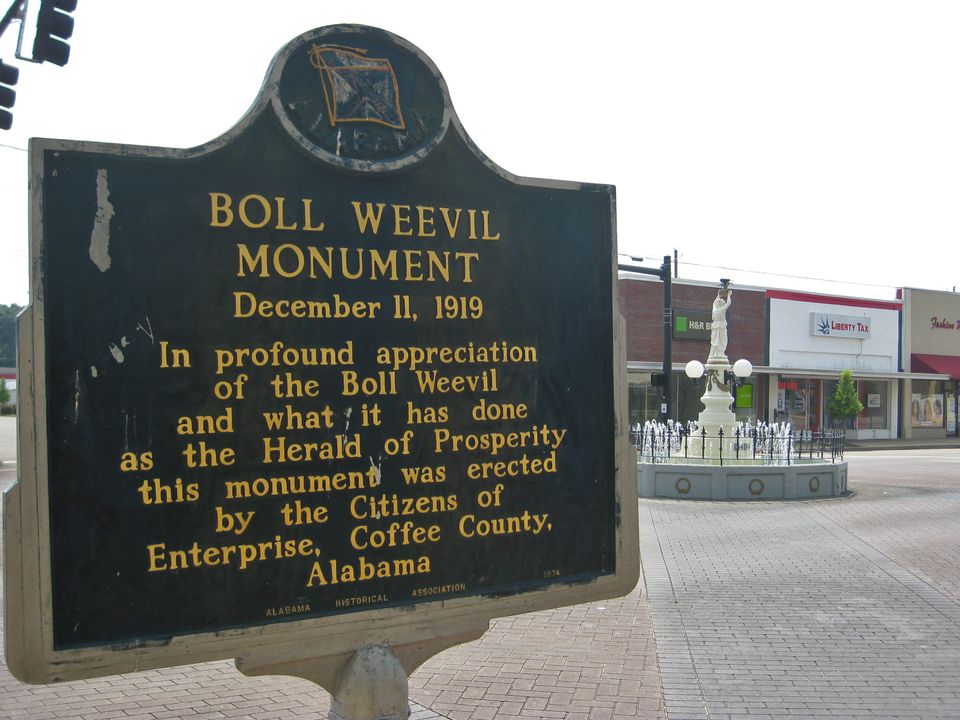 1 / 51
Alabama
There are plenty of monuments to be visited in America. But the <a href="http://www.roadsideamerica.com/tip/19" target="_blank">Boll Weevil Monument</a>, located in Enterprise, Ala., may be one of the most bizarre. The town erected the monument in 1919 in honor of the boll weevil bug, which destroyed Enterprise’s crops, forcing the town to diversify its agriculture.
WikiMedia: