A small snake that lives only on a pinprick of an island in the Caribbean has won the title of world's rarest snake, a dubious honor for the St. Lucia racer. As few as 18 of its kind remain on Earth, making it one of the planet's rarest animals overall.

Described as gentle and easy to handle, the remaining snakes live on a half-mile-square island just offshore of St. Lucia, one of the Lesser Antilles, a chain of small volcanic islands that stretches from Puerto Rico to South America, dividing the Caribbean from the Atlantic Ocean.

The mottled brown snakes, once abundant on St. Lucia, were decimated by the arrival of mongooses — fierce reptile hunters — in the late 19th century. The small, furry carnivores were brought in from India to control venomous snakes on the island, but the mongooses, fearless predators, didn't discriminate. By 1936, the St. Lucia racer, a harmless species that grows to just under 3 feet (1 meter) in length, was declared extinct. 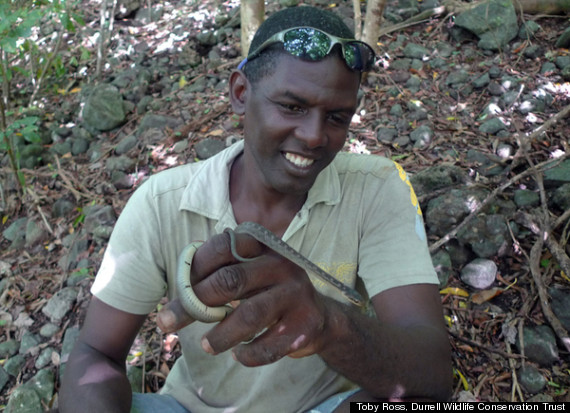 St. Lucia Forestry Department's Stephen Lesmond with one of the island's remaining racers.

But in 1973, a single St. Lucia racer was captured on Maria Islands Nature Reserve, a miniscule island off St. Lucia's southern coast that is mongoose-free.

In late 2011, researchers meticulously tracked down 11 St. Lucia racers on the tiny island, and outfitted the snakes with tiny data recorders. Their results indicate that as few as 18 of the racers still survive on the island. More generous estimates put their number closer to 100.

St. Lucia officials expressed relief at the news that the species hasn't yet disappeared, and said the island nation would work with conservation organizations to improve the snake's chances for survival.

British conservation group Flora & Fauna International pointed to the success story of the Antiguan racer, a species that formerly held the title of world's rarest snake, as hope for the St. Lucia racer. In 1995, only 50 Antiguan racers remained on Earth, but thanks to protective measures their population has swelled to 900.

"Tens if not hundreds of West Indian animals have already been lost because humans have unwisely released harmful species from other parts of the world," Jenny Daltry, senior conservation biologist with Fauna & Flora International, said in a statement.

"To do nothing is not an option," she said.