Earlier this month, the St. Lucia Jazz & Arts Festival took place as it does every spring, but this time around, there was a lot more to celebrate than just the music. This year marks the twenty-fifth anniversary of the event, which has become known as one of the best festivals in the Caribbean.

While the festival actually runs for ten days, there are three that are the main focus, as they feature some of the biggest performers in the world coming through to put on a show for the thousands of music lovers that show up. Headliners this year included Marc Anthony, Air Supply, Shaggy, Omarion, OMI, Kool & The Gang, and plenty of acts that are heroes in the region and to those that love Caribbean music everywhere. 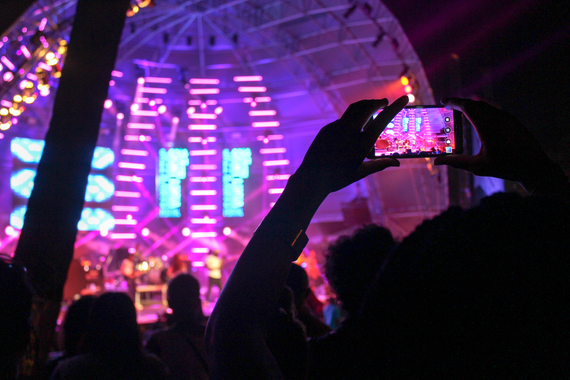 A look at the main stage at the St, Lucia Jazz & Arts Festival through an attendee's phone (photo: Hugh McIntyre)

While festival organizers clearly went out of their way to book some headlining acts from around the world and those that had sent their hits to the top of the charts in the nearby United States, they didn't end up being the highlights that one might expect them to be, at least not for me. If you live in St. Lucia, I could understand the draw that these musicians would have, as many of them don't visit smaller island nations very often on their tours, but after all was said and done, it was those acts that I had never heard before I arrived that really blew me away.

Artists like OMI and Shaggy are both from the Caribbean, and the people of St. Lucia have clearly not forgotten that. Both of them delivered perfectly fine sets, though they probably could have given it minimal energy and still enjoyed a warm welcome and some serious applause. While they were both certainly enjoyable to watch, I wouldn't put either of them at the top of the list. OMI's summery playlist didn't seem to get the crowd moving as much as I had expected, while Shaggy's hit-laden performance featured a handful of surprising songs that weren't even his, such as DJ Snake's "Turn Down For What," which was obviously played to pump up the crowd...though Shaggy didn't seem to even sing along.

While there were perfectly acceptable performances and a handful that truly took my breath away (literally, after dancing so much), there was one that I must say goes down as a perfect example of how sometimes a famous person rests on their name, and not their performance. American R&B star Omarion took to the stage on the second day of the festival just before the sun set and the party really started. It was clear that there were plenty of younger people excited to see him, and things kicked off alright. He finished what appeared to be a shorter set, just to come back out for an extended encore. While the first half of things were fine, if not terribly exciting, his return was extremely disappointing.

Almost immediately he let his DJ take over, at one point sitting down and waiting while several hits played, none of them being his. For a period of time, he was actually standing and holding a child, but not much else was going on. At times he looked like he could have been dancing...or perhaps the breeze was just blowing him slightly. Before he left, a fan in the front shouted a song title, and it seemed to surprise the performer, who called it a throwback, and he agreed to do it before leaving. His DJ hit play on the song itself, while Omarion stood there, not even pretending to sing for a little over a minute. If I had been a real fan, I'd have been devastated, but as it stands I'm only slightly shocked and supremely disappointed.

The festival showed its true, brilliant colors when performers like Kes and Kassav took the stage and faced a clearly-excited and amped up crowd. I don't know much about Caribbean music, so I had never heard of either of them, but I wanted to give them a try. From their style to their energy to their overall stage presence, everything was on point, and I can't imagine either of them doing any better...though several people told me this wasn't even them at their best.

I was so thrilled that the various forms of Caribbean music were the best of the festival, as that's really what you want when attending a concert in another country. The mixture of their music and the pure joy coming from the ever-growing crowd tricked me into having a good time without my even realizing it, and every time one of their sets ended, I was simultaneously exhausted and thrilled at the same time.

This festival was clearly not only a big deal for the people of St. Lucia, but a source of national pride. There are plenty of events like this in the U.S., and often times they come and go without being noticed outside the city lines, but that was not the case here. Everywhere I went on the island in the several days I was there, the words "jazz festival" were on people's lips. It seemed like everyone I met brought it up, and they were excited to do so. They seemed honestly happy that I had come to their country for this, as it was a moment when everything looked its best and the entire nation seemed to be putting its best foot forward.

The St. Lucia Jazz & Arts Festival is perhaps your best opportunity to visit the island, as it is when there is more going on than any other time of year. If you get tired of hearing the music and looking at the art, it's pretty difficult to forget that you are also on one of the most naturally stunning islands in the world. If even for a night, it's wonderful to see so many people from the area having what looks like the time of their lives, and to then experience all of the other activities this picturesque nation offers.

If you make it down to St. Lucia, try to hear some real, local music. Forget cover bands or names you're already familiar with. Try something new and you'll be dancing instantly, swaying in the tropical breezes for as long as your feet can hold you up.