After Pope Benedict XVI announced his resignation, those familiar with a 12th-century prophecy claiming the next pope will be the last questioned if Judgment Day is quickly approaching. Scholars, theologians and churchmen, however, all treat this "prediction" as fiction passed off as reality.

The "Prophecy of the Popes" is attributed to St. Malachy, an Irish archbishop who was canonized a saint in 1190, according to Discovery News. In his predication, dated 1139, Malachy prophesied that there would be 112 more popes before Judgment Day. Benedict is supposedly the 111th pope.

The foretelling offers brief descriptions about each pope, and some of them appear to align with reality in some way. For example, Benedict is apparently denoted as the "glory of the olive," and the Olivetans are affiliated with Benedictine Order, NBC News notes.

Curiously, the "Prophecy of Popes" stops at the 112th pope and ends with a cryptic warning of doomsday.

In the extreme persecution of the Holy Roman Church, there will sit ...
Peter the Roman, who will pasture his sheep in many tribulations:
and when these things are finished, the city of seven hills will be destroyed,
and the terrible judge will judge his people.
The End.

However, although Cardinal Peter Turkson of Ghana might bear the same name as the person mentioned in the prophecy, there are no Roman-born cardinals in the running to be Benedict's successor.

"There are no Pietros among the living cardinals; two Pierres (as second name): Nasrallah Pierre Sfeir and Jean-Pierre Ricard; and one Pedro: Rubiano Sáenz," according to librarian Salvador Miranda, creator and producer of the website The Cardinals of the Holy Roman Church.

Like any good conspiracy theory, there are many holes in the lore of St. Malachy, according to Father James Weiss, a professor of church history at Boston College.

First of all, there is no original manuscript of the prediction. Malachy's vision was allegedly discovered and published by Benedictine Arnold de Wyon in 1590. Prior to that date, there is no mention or record of it, Weiss told The Huffington Post.

Reputable church historians and clerics have considered it a forgery since the 18th century.

"Between the summer of 1590 and the fall of 1592, there were four popes [elected during] a period of rapid turnover," Weiss said during a phone conversation with HuffPost on Wednesday. "It was also a point at which there was intense rivalry between France and Spain to control the papacy for their own political reasons."

The prophecies surfaced after the first of the newly elected popes died. "It is widely thought, also given who the author was and his relationship, [that the prophecies] were published to establish the case for election of one particular cardinal," he added.

Text from St. Malachy's "Prophecy of Popes." Story continues below. 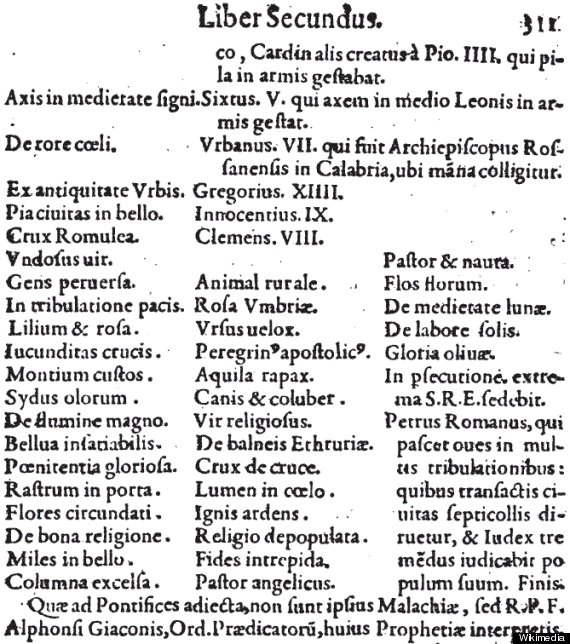 Another point Weiss raises is the line between the prediction for No. 111 "glory of olive" and No. 112 Petrus Romanus.

Despite the fascination surrounding it, Malachy's prophecy is regarded as malarkey by church officials and scholars.

"Theologically and organizationally, the church pays no attention to this," Weiss said. "The only thing that you would say to someone who was obsessed or curious about it would be, 'Our times are in God's hands and we can trust God's providence.' But that won't satisfy a lot of people."

Weiss is certainly not alone in his stance on St. Malachy's prophecy.

Dr. Thomas Groome, chair of the Department of Religious Education and Pastoral Ministry at Boston College, has a similar notion.

"For myself -- and even as a native Irishman -- the 'Prophecies of St. Malachy' are a grand old fun tale that have about as much reliability as the morning horoscope," he told HuffPost in an email Wednesday.

Thomas J. Reese, SJ, of Georgetown University, had only this to say about the buzz: "St. Malachy's prophecy is nonsense."