Thousands of green-shirted spectators will descend on Corktown this Sunday for the Detroit St. Patrick's Day Parade. Fifty-five years later, the city's annual tradition to celebrate Irish history and heritage hasn't faltered ... and it also happens to be one of the best places to find men in kilts.

The march down Michigan Avenue takes place, as usual, a week before the Irish holiday. It begins at 2 p.m. when marchers, high school bands, floats, clowns and more begin stepping at 6th Street, continuing down Michigan to 14th Street. Organized by the United Irish Societies, the theme for this year's parade is "Detroit Irish: Proud of Homeland, Heritage, & Heroes."

Before the parade begins, runners will compete in a 5K with a little bit of history of its own. The Cork Town Race runs along Michigan as well, and has been around for more than 30 years. Ahead of the noon race, there's a quarter mile for youth athletes at 11:30 a.m.

Corktown's past -- the historic neighborhood began as a mostly Irish community -- makes it the perfect setting for the parade. But while Sunday's afternoon festivities are a family event, the neighborhood's many, many bars make it an ideal spot for more riotous celebrations. In fact, one of the reasons for holding the parade separate from the holiday is to give restaurants and bars along Michigan Avenue another day of busy business. So drink up!

Check out what Corktown's popular bars have going on for parade day in the slideshow below, and happy almost St. Paddy's day! 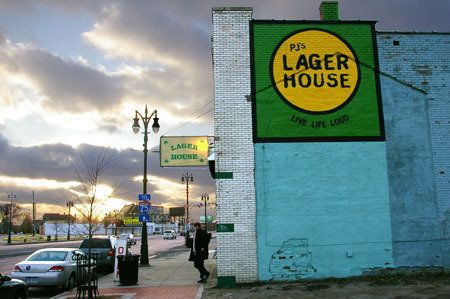 1 / 14
PJ's Lager House
<a href="http://www.pjslagerhouse.com/">PJ's Lager House</a> 1254 Michigan Ave., Detroit (313) 961-4668 One of Detroit's best bars to catch a show, that happens to also serve some of the best under-the-radar grub, will be going full steam during the St. Paddy's Day Parade. Beyond their normal menu, they'll be serving corned beef tacos -- a fun twist on an Irish classic. Stone Clover plays in the morning and Bill Grogan's Goat, a band mixing "solid Detroit rock with traditional Celtic melodies," plays in the early afternoon.
PJ's Lager House