The main suspect in a blast in a St Petersburg train carriage that killed 14 people and wounded 50 is a Russian citizen originally from mainly Muslim Kyrgyzstan, authorities there said on Tuesday.

The perpetrator had radical Islamist links, Russian media cited law enforcement officials as saying, raising the possibility the attack could have been inspired by Islamic State, which has not struck a major city in Russia before.

There has been no official confirmation or claim of responsibility. The Kyrgyz GKNB security service identified the suspect as Akbarzhon Jalilov, born in the city of Osh in 1995, but provided no other details.

The explosion on Tuesday in the middle of the afternoon occurred when the train was in a tunnel deep underground, amplifying the force of the blast. The carriage door was blown off, and witnesses described seeing injured passengers with bloodied and blackened bodies.

State investigative authorities said fragments of the body of the suspect had been found among the dead, indicating that he was a suicide bomber.

IS, now under attack by all sides in Syria’s multi-faceted war, has repeatedly threatened revenge and been linked to recent bombings elsewhere in Europe.

If it is confirmed that the metro bomber was linked to radical Islamists, it could provoke anger among some Russians at Moscow’s decision to intervene in Syria, a year before an election which President Vladimir Putin is expected to win.

The National Anti-Terrorist Committee said on Monday an explosive device had been found at another station, hidden in a fire extinguisher, but it had been defused. It was unclear who had placed that device and no arrests have been made.

Russia has been on alert against attacks in reprisal for its military intervention in Syria, where Moscow’s forces have been supporting troops loyal to President Bashar al-Assad against Western-backed armed groups as well as the hardline Islamic State (IS) which grew out of the conflict.

Officials said they were treating the blast as an act of terrorism, but there was no official confirmation of any link to Islamist radicals.

Russian Foreign Minister Sergei Lavrov said it was cynical to say the bombing in St Petersburg was revenge for Russia’s role in Syria. He said the attack showed that Moscow needed to press on with its fight against global terrorism.

Russian officials said they did not want to reveal the suspect’s identity. But a picture was starting to emerge on Tuesday of the man named by Kyrgyz authorities.

A page on social media site VKontakte, the Russian equivalent of Facebook, belonging to someone with the same name and year of birth as Jalilov, included photos of him relaxing with friends in a bar, smoking from a hookah pipe. He was dressed in jackets and a baseball cap, and showed no outward sign of any religious affiliation.

A Reuters reporter visited a house in Osh, southern Kyrgyzstan, which neighbors said was the family home of Jalilov. The home, a modest but well-maintained one-storey brick building, was empty.

Neighbors said Jalilov was from a family of ethnic Uzbeks, and that while they knew his parents they had not seen the young man for years. They said his father worked as a panel-beater in a car repair shop.

Osh is part of the Fergana Valley, a fertile strip of land that straddles Kyrgyzstan, Uzbekistan and Tajikistan which is mainly populated by ethnic Uzbeks. It has a tradition of Islamist radicalism and hundreds of people have set out from the area to join Islamic State in Syria and Iraq.

A blast at a nightclub in Istanbul on New Year’s Eve that killed 39 people involved a suspect from the same part of central Asia. The bomber in that attack said he had been acting under the direction of IS militants in Syria.

Jalilov has been registered at an apartment in the north of St Petersburg since 2011, according to a source in the Russian authorities, and he has a Daewoo Nexia car registered in his name.

The apartment is in a brand new 16-storey building with its own security guards and a gated garden, and jewelry shops, a wine store and a bank on the ground floor.

The head of the local apartment-owners cooperative, Lyudmila Morozova, told Reuters the owner of the apartment was renting it out to tenants, but she said she did not know if Jalilov was one of the tenants. She said that state investigators had visited the apartment on Monday evening.

Russia’s health minister Veronika Skvortsova said on Tuesday that the death toll from the blast, which hit at 2:40 p.m. (1140 GMT), had risen to 14, with 50 wounded.

St Petersburg television showed footage of the corpse of a bearded man they said was the perpetrator. The man resembled footage of a man captured on closed circuit television identified by Russian media as a suspect.

“It has been ascertained that an explosive device could have been detonated by a man, fragments of whose body were found in the third carriage of the train,” Russia’s state investigative committee said in a statement.

“The man has been identified but his identity will not be disclosed for now in the interests of the investigation,” the statement added.

Passengers were seen hammering at the windows of one closed carriage after the train pulled into the station. Russian TV said many suffered lacerations from glass shards and metal.

President Putin, who was visiting St Petersburg at the time of the blast, went to the site late on Monday.

The Kremlin said it was “noteworthy” that Putin had been in the city. It did not elaborate, but said such attacks on Russia were a challenge for every citizen, including the president.

Two years ago, Islamic State said it had brought down a plane carrying Russian tourists home from a Red Sea resort. All 224 people on board the flight were killed.

Monday’s blast raised security fears beyond Russian frontiers. France, which has itself suffered a series of attacks, announced additional security measures in Paris.

Russian officials received a warning of a possible second attack at the same Sennaya Ploshchad metro station on Tuesday but that alert was later lifted and the station reopened. 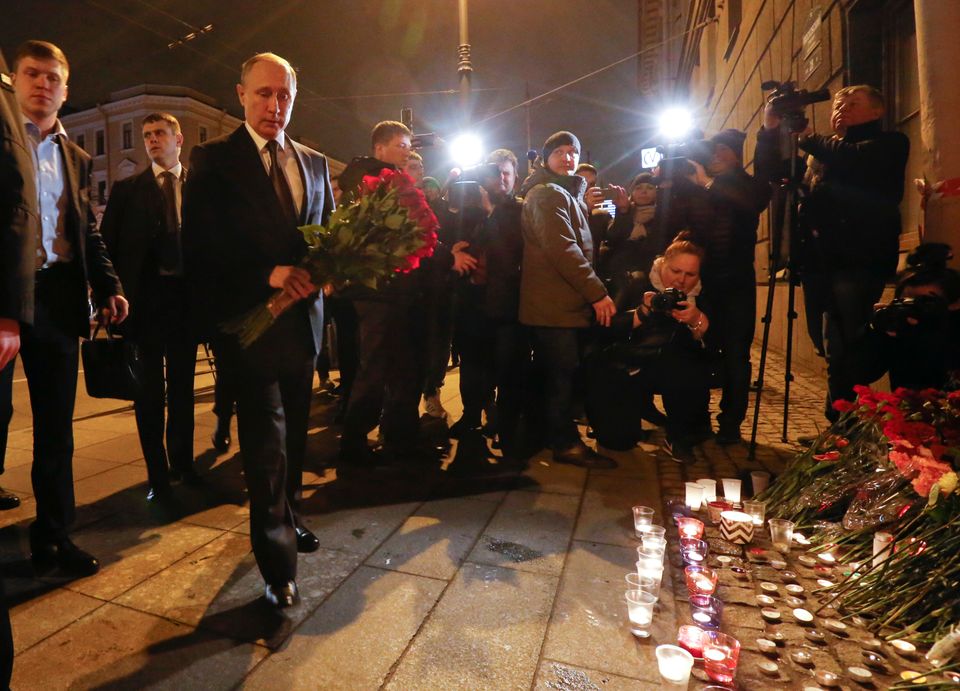