A controversial Tennessee Republican's joke about a pressure cooker angered critics who felt the politician was making light of the Boston Marathon bombing.

State Sen. Stacey Campfield posted a picture of an "Assault Pressure Cooker" to his personal blog, Camp4U, on Monday. The pressure cooker had the caption "Here comes Feinstein again," a mocking reference to Sen. Diane Feinstein’s (D-CA) recently defeated proposal to ban military-style assault weapons. According to Raw Story, Feinstein’s bill was criticized by gun proponents for using "cosmetic features to decide which rifles will be outlawed." 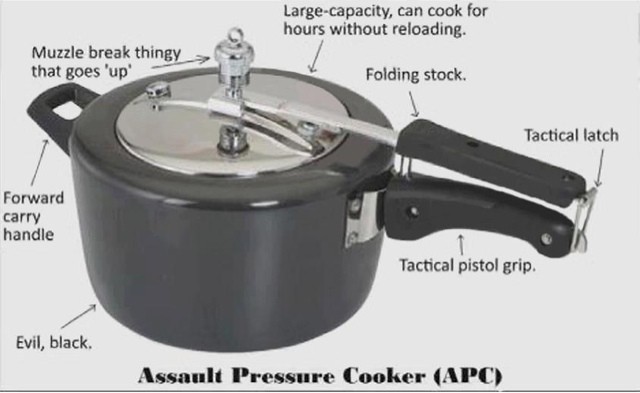 Comments on the post were decidedly negative, with several asking Campfield why he was making such a joke just days after at least one pressure cooker bomb was allegedly used to wreak havoc in Boston.

"What kind of insensitive imbecile thinks it's okay to post a picture like this," wrote commenter Accumulated Apperception. "Do you think it's a joke? Three people dead, one an eight year old child and you think it's something to laugh about [all sic]?"

Campfield, who is notorious for proposing a "Don't Say Gay" bill that would have required teachers to out gay students, later published a second post to complain about the complaints.

If my post was inappropriate talking about "crock pot control" then where is the outrage from the left when they push for gun control after the Sandy Hook shooting? Im sorry if I exposed your double standard....

"People need to lighten up," the lawmaker said. "I say it's insensitive that people go after guns and [S]econd [A]mendment rights after the Sandy Hook shooting."

In February, Campfield raised eyebrows when he engaged in a heated and insulting exchange with critics in the comments section of the Knoxville News Sentinel's website after the paper ran a reader-submitted letter criticizing Campfield.