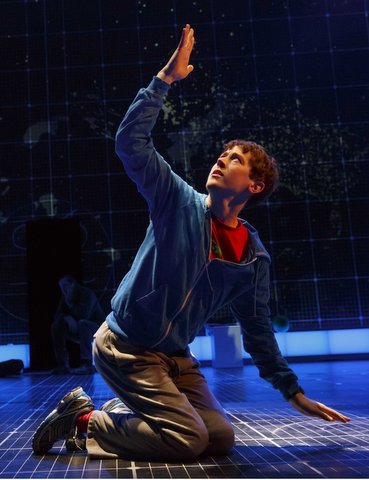 Alex Sharp in The Curious Incident of the Dog in the Night-time.
Photo: Joan Marcus

There are plays that entertain, plays that illuminate, and plays that bring us to an exalted new place. The Curious Incident of the Dog in the Night-time, at the Ethel Barrymore, does all three. This is exhilarating, dynamic theatre which triumphantly expands the boundaries of theatricality.

Playwright Simon Stephens and director Marianne Elliott (of War Horse) have taken children's book author Mark Haddon's 2003 novel--an international bestseller, well-loved by children and adults alike--and exploded it onto the stage. Explode, perhaps, is the operative word. Fifteen-year-old Christopher Boone struggles with what seems to be Asperger's Syndrome, and any number of sensory overloads trigger massive attacks. Improbable as it may seem, Stephens, Elliott, and the stagecraft of a wondrous design team take us inside Christopher's mind as it short-circuits--and allow us to share his triumphs as he finds the strength to succeed against obstacles daunting.

Broadway's newest import comes from Britain's National Theatre, launch pad of War Horse, History Boys, One Man Two Guvnors and other trans-Atlantic hits. This one premiered at the Cottesloe in August of 2012; transferred to the Apollo in March 2013; went on involuntary hiatus when those nightly explosions apparently forced a section of the Apollo roof to collapse; and is currently ensconced at the Gielgud across the lane. And now, as of last night's opening, New York is conquered as well.

Alex Sharp--a London-born 25-year-old, just out of New York's Juilliard--makes an impressively touching Broadway debut as Christopher. (He alternates in the strenuously physical role with Taylor Trensch.) He is joined by Ian Barford as the troubled father and Enid Graham as the vanishing mother; both give shaded performances, presenting conflicted selves as they struggle to deal with a child who is "not exactly low maintenance." (The scenes in which they, separately, help Christopher change clothes hold the audience breathless.) Francesca Faridany, as the supportive teacher, guides Christopher--and the audience--through his journey; Helen Carey creates empathy in several important exchanges; and the other nine actors have key moments in ensemble roles.

Simply put, Curious Incident is one of the most memorable evenings you're likely to have on Broadway for quite some time. It has the same emotional impact as War Horse, but with a bit of an edge over that excellent offering. The World War I epic enthralled us with a marvelous physical production, led by those puppets; the story itself, though, was a simple if highly effective tale of a boy and his horse. Curious Incident features a production as marvelously intricate, but it is more stimulating and rewarding as a play. 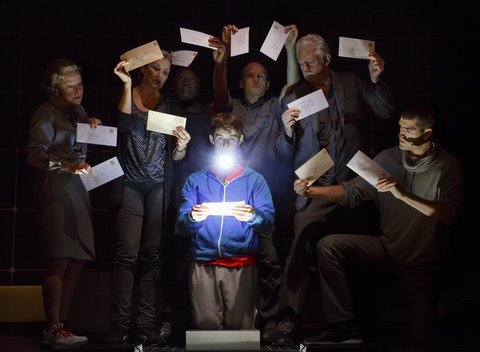 Alex Sharp (center) in The Curious Incident of the Dog in the Night-time.
Photo: Joan Marcus

We could go on further about the wonders of the evening, but excess praise would simply bring us back to: Go see it! You will be amazed and enthralled! So we will simply pause to salute the team responsible for implementing all that stage magic with Elliott: scenic and costume designer Bunny Christie, lighting designer Paule Costable, video designer, Finn Ross, composer Adrian Sutton, sound designer Ian Dickinson, and especially Scott Graham and Steven Hoggett, who are responsible for the choreography and movement. The vision of Christopher flying through space and literally walking on walls through bursting light will remain with you.

Be advised, by the way, not to leave when the play ends. Christopher returns a minute or two after the curtain call, and you wouldn't want to miss the bravura coda that Ms. Elliott and Mr. Stephens have conjured. And let us end with a cautionary note for parents, who are urged to take the kids (starting with mature ten-year-olds): Exposure to the stage version of Curious Incident is likely to make Junior a passionate playgoer for life.

The Curious Incident of the Dog in the Night-time, a play by Simon Stephens based on the novel by Mark Haddon, opened October 5, 2014 at the Ethel Barrymore Theatre.