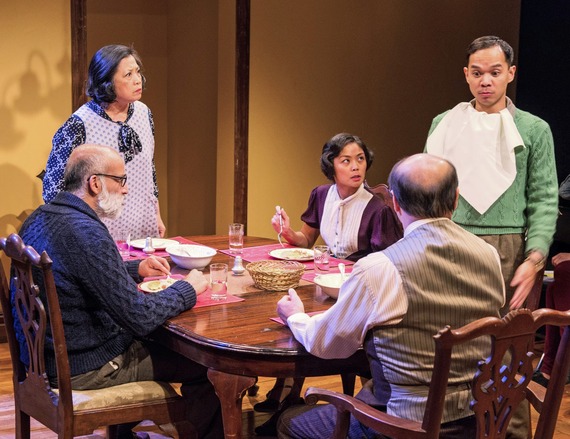 One of Clifford Odets' masterpieces, Awake and Sing, a sprawling drama about the travails of a 1930s lower-middle class Jewish family in the Bronx, is now off-Broadway at the Public Theater.

And it's always a good choice. Odets champions the poetic power of the colloquial.

The famed kitchen-sink drama was the first to put the realities of American Jews on Broadway. A marginalized group had suddenly been thrust center stage.

Though the play has a specific cultural milieu, it addresses universal themes of troubled families and class struggles, the playwright's specialty. It reflected, in part, his own childhood pain. The three-generation Berger family, eking out an existence in the Depression, speaks to every generation that wrestles with personal and societal blues.

And that truth is borne out by the show's twist: an Asian-American cast. An added bonus: They all speak in the style and rhythms of Thirties' New York Jews, giving voice, literally, to the time. The NAATCO production isn't a thundering one, like the 2006 Broadway production starring Zoe Wanamaker as the towering Bessie. It's a quieter, cooler version that retains Odets' stark naturalism and his belief that we must be awake to life's possibilities.

Each member of the Berger family, including Moe, the bombastic boarder (an excellent Sanjit De Silva), is ruled by desperation. Desperate for money. Desperate for love. Desperate for rescue. The grind of daily life is wearing them to a frazzle.

Mia Katigbak as matriarch Bessie deftly captures the strength and blunt ferocity of a woman trying to maintain order in a chaotic and divided household. Bessie's monstrous curtness hides her own sorrows. Her energies are devoted to financial survival. "Here without a dollar you don't look the world in the eye," she says. "Talk from now to next year -- this is life in America." Teresa Avia Lim as her tormented daughter Hennie is a standout. She hones her rage and despair in every movement.

Whatever promise America held for immigrants and their children, fear and frustration now govern their lives. "All I want is a chance to get to first base," son Ralph (Jon Norman Schneider) laments. Myron (Henry Yuk), his father, is passively lost in his own quirky world. Struggle victimizes in insidious ways; some rant, others retreat.

"Life shouldn't be printed on dollar bills!" screams Jacob (Alok Tewari), Ralph's grandfather. A Marxist comforted by his beloved Caruso, he dreams of revolution and redistributed wealth, while his grandchildren focus on individual salvation. Hennie is trapped by an unwanted pregnancy; Ralph by a doomed love and dead-end job. Mo is an explosive loner who hungers for connection. Uncle Morty (James Saito), a successful businessman, preaches the virtues of American entrepreneurship, yet worries about labor protests.

Like any pressure cooker, it's just a matter of time before everything explodes.

Each character's desperation is at a different pitch and has to be carefully calibrated by director Stephen Brown-Fried. In a simple, unadorned living room, Odets' epic war between idealism and reality, which probes the psychological complexities of those on the edge, enjoys a solid revival. "Shake down the coconuts," Moe urges. This Awake and Sing does just that.