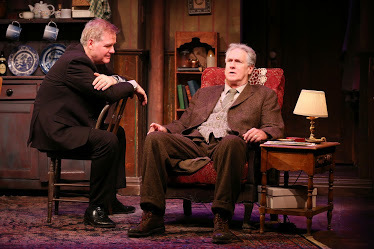 To Hugh Leonard, his father is the one thing he cannot escape. The autobiographical Da, now at the DR2 Theater off-Broadway, is the Irish Rep's revival of his bittersweet Tony-winning play.

Set in Dalkey, County Dublin in 1968, the memory play focuses on middle-aged Charlie (Ciaran O'Reilly), who has just buried his father. Yet the irascible Da (Paul O'Brien) returns as a ghost, unwilling to leave his angry son.

As Charlie wrestles with his past, neatly staged before his eyes, he confronts his younger self (Adam Petherbridge), his mother (Fiana Toibin), and Drumm (Sean Gormley), the civil servant who gave him his first job. Drumm, who seems to regard Charlie as the son he never had, is forever giving him advice.

The contrast between the unsophisticated gardener Da, who takes in Charlie, an illegitimate baby, and Drumm, an educated man, is striking. Da often embarrasses Charlie, roots for Hitler to win, and refuses any assistance his grown son offers.

In Catholic Ireland, his illegitimacy was a stigma, which explains, in part, his mother's sense of martyrdom. While both parental relationships are combative, the push-pull of his relationship with Da, which combines affection and frustration in equal measure, endures.

Da isn't nostalgia; it's a wry sense of how the past is prologue. Be it Charlie's first, awkward attempts at sex with the girl dubbed "the Yellow Peril" (Nicola Murphy) or re-connecting with an old friend Oliver (John Keating), the experience is telling. Charting his journey from working-class childhood to literary success in London, Charlie confronts his anger, cynicism and disdain. His debt to Da, like the love they share, is inescapable.

Director Charlotte Moore has assembled a strong cast, the scenes between Ciaran O'Reilly and Paul O'Brien are especially good, aided by brisk pacing and James Morgan's spot-on set. Da speaks to the miasma of regret that accompanies death -- in all its guises.

Transformations are also the subject of The Woodsman, an inventive artistic production at 59E59 Theaters. Noted for its clever programming, the theater has scored another winner in the dark tale of the Tin Man. Wicked made the multilayered back story to The Wizard of Oz riveting. Here, the focus is on one of Dorothy's triumvirate, the Tin Man, who begins life as the son of beloved parents. Originally named Nick Chopper (James Ortiz), he lives in a cursed region in the Land of Oz. 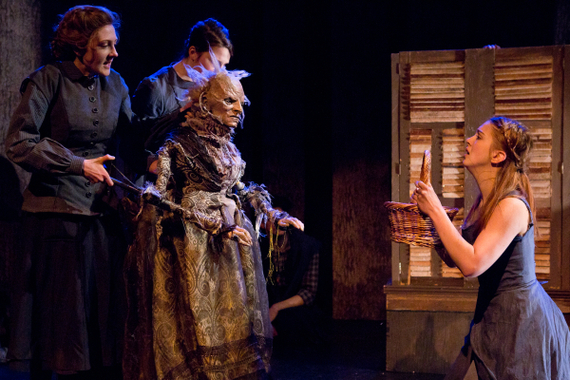 The strains of a violin are a perfect backdrop to the eerie atmosphere that envelops Munchkinland, thanks to Edward W. Hardy, the composer/music director and violinist. A sensory experience, The Woodsman is told primarily through music, movement and puppetry -- rendering the show both striking and mesmerizing.

It's Nick's ill fortune to fall for slave girl Nimmie (a wonderfully expressive Eliza Simpson), who is tormented by the Witch of the East (a fantastic two-person puppet). Love affairs are anathema to the evil witch -- and Nick pays dearly for his passion. Watching The Tinkers revamp Nick is a creative high point.

Creator and director James Ortiz, who also plays Nick, and costume designer Molly Seidel, have fashioned a compelling 60-minute show, a fantasy ideally suited to the space. The Woodsman invites us into a foreboding Oz that taps into the heart of darkness.