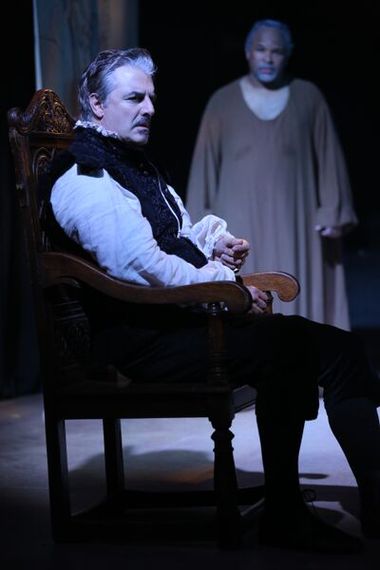 The lead in Doctor Faustus is dismissive of law and science, chucking the Bible with smug abandon. What he craves is power, sex and wealth. Indeed, he deems sorcery omnipotent: "The true magician is a mighty God." And to secure such ends, he is ready to sell his immortal soul. "If this is hell, let me be damned!"

That Faustian bargain, now playing off-Broadway at CSC, is an edited adaption of Christopher Marlowe's 17th-century play. Faustus (Chris Noth) envisions reshaping the map of Europe, while piling up personal riches and aggrandizing himself.

Though loaded with eloquence, he possesses a stubborn blindness when it comes to consequences. Faustus rejects a God-centered universe, even as he debates God's power with Mephistopheles (Zach Grenier), who slyly one-ups his charge.

Moreover, he's no winner in the art of the deal.

Far from a savvy negotiator, Faustus asks for a mere 24-year lease on omnipotence. Considering the cost -- eternal damnation -- he doesn't drive a hard bargain. More to the point, once granted great powers, he squanders them, easily led astray by the elusive Lucifer (Jeffrey Binder) who, through his agent, can manipulate the doomed Faustus.

Whenever Faustus gets distracted from his power-hungry mission, Mephistopheles steps in to cajole and/or threaten him to stay true to his oath.

There is much to contemplate in this streamlined version of wealth vs. soul, and happily, it's not without comic relief. The servant Robin (a wonderful Lucas Caleb Rooney) makes laughable jabs at both scholarship and his betters.

A particularly good scene is when director Andrei Belgrader, who, along with David Bridel adapted the work, parades various sins, such as envy, lust, gluttony and sloth. It's a moral treatise on excess that is as meaningful in Marlowe's time as our own. Indeed, one could argue it's even more relevant -- and dangerous -- today, in an age of true globalization.

Noth's Faustus is solid; in a world of devious, sometimes over-the-top characters, he holds his own, illustrating both the vast appetites and base fears that consume him. The production is staged with some audience participation, at times humorous, at others awkward, but it makes the point: Seduction is not always pretty. (Unless you count the scenes with Helen of Troy (Marina Lazzaretto).

Of special note, Jason Lyons lighting, Fabian Obispo's music and sound design give the production added menace, while the set design and costumes hit the mark. Still, this is a tough production to bring off and the cast does its best to balance the low, ribald moments with metaphysical ones to produce a thoughtful trek into divine terrors.