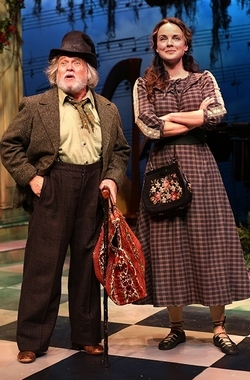 It may be a bit of blarney, but the current revival of Finian's Rainbow at the Irish Rep is charming and magical. Director Charlotte Moore's scaled-down production offers an intimacy and meaning somewhat lost in the 2009 Broadway version.

It also hits the right political note, especially in a post-election world.

The Burton Lane-Yip Harburg musical, set in the segregated 1947 South, addresses racism, corrupt politicians and immigration -- within a fantastical setting.

If it resonates today, with lines like "I've been bothered by immigrants ever since I got to this country," so much the better.

The show has lost none of its relevance, and its racial plot twist, while simple, remains a clever theatrical device.

Finian, a spry Irishman (Ken Jennings) and his daughter Sharon (a mesmerizing Melissa Errico) come to America with a stolen pot of gold. Throw in friendly sharecroppers, a growing leprechaun (a delightful Mark Evans) and sweep-you-off-your-feet romance for good measure.

If that sounds too saccharine, consider the memorable score.

Songs like "Old Devil Moon," the bluesy "Necessity" and "How are Things in Glocca Morra?" are glorious. Errico has played Sharon in previous incarnations -- and she sounds better than ever, accompanied by a first-rate chamber quartet: piano, harp, cello and fiddle.

The social satire is light, but it makes the point -- and no one can resist the songs, be they romantic or energetic, such as "The Great Come-And-Get-It Day." Every number clicks, and the first-rate cast doesn't miss a beat.

Barry McNabb's choreography and James Morgan's set design make the most of the small space, proving less is more.

Part fairy tale, part commentary, Finian's Rainbow has something to say about tolerance, love and the importance of dreams. And that message never grows old.